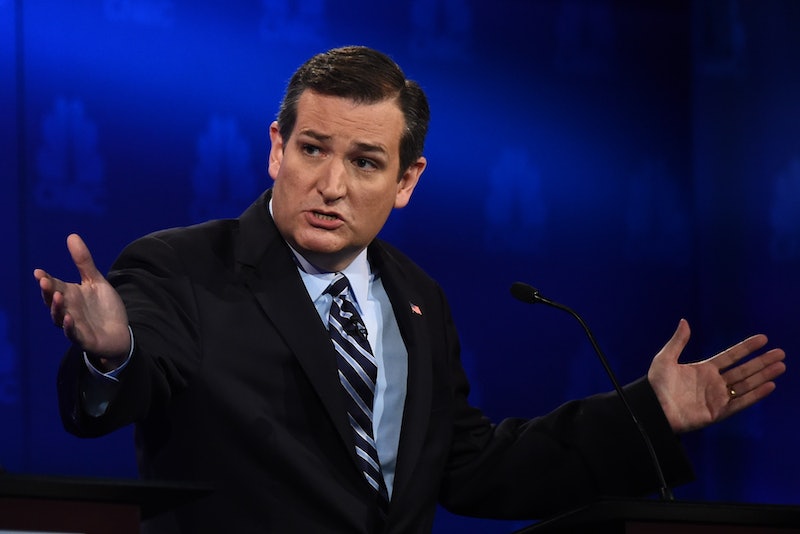 Surprisingly, women's rights and women's issues actually popped up in the third GOP primary debate — and it had nothing to do with abortion or Planned Parenthood, for once. When asked about equal pay and improving the lives of women, Ted Cruz and his colleagues started to make a really good point about inequality ... but then it kind of fell apart. And one tweet perfectly summarized the GOP's platform on women.

Amid a series of statistics about how working women have fared during the Obama administration, (according to Cruz, 3.7 million women have entered poverty), Cruz reiterated his desire to fight for women. He gave a nice shout-out to single moms by highlighting all the hardworking ones he knows in his family. But then he changed the subject, choosing to focus on a story about his absentee father being born again through religion, instead of continuing to address the wage gap.

While it's refreshing to hear Republican candidates realize that women exist beyond their ability to carry children, a lot of their promises and statements about "fighting for women" sound empty. Especially when you look at their statements in a larger context. Aside from the fact that few of these candidates have supported legislation that would substantially improve women's lives, all of their previous statements kind of work against them. And there was one tweet that perfectly summed it up:

Almost unilaterally, the Republican candidates oppose abortion, and have worked to defund Planned Parenthood. During both the first and second debates, Planned Parenthood was a star player, and on several occasions, the candidates took the opportunity to distance themselves even farther from abortion rights and access.

Some of the biggest headlines of the second debate came from Carly Fiorina's passionate speech against Planned Parenthood, in which she referenced a nonexistent video of a fetus being kept alive to "harvest its brains." For women, it was a painful night.

But as Republicans are slowly realizing, there are other women's issues beyond Planned Parenthood and abortion. Paid parental leave, for example, is a crucial issue among women who still can't believe that the United States is one of the only industrialized countries that doesn't offer it. But the Republican candidates oppose that, too.

Both Cruz and Jeb Bush have dismissed paid leave as another unnecessary federal expenditure. Marco Rubio is one of the only candidates who does support paid leave, and has even included it in his policy. But instead of mandating it across the board, Rubio's plan only provides incentives to companies that offer paid leave. Which, while a start, is nowhere close to a solution.

And let's not forget which party is advocating for raising the minimum wage. Hint: It's not the Republicans. Fiorina said during the third debate that "The federal government has no place setting a minimum wage," a point which many of her fellow candidates agree with. But we know that decreasing the wage gap and helping to pull those alleged 3.7 million women out of poverty can start with increasing the minimum wage.

But the candidates don't see these individual issues as part of the bigger picture. They don't appear to realize how these things affect women — which is why it's difficult to accept the candidates' claims that they'll fight for them.