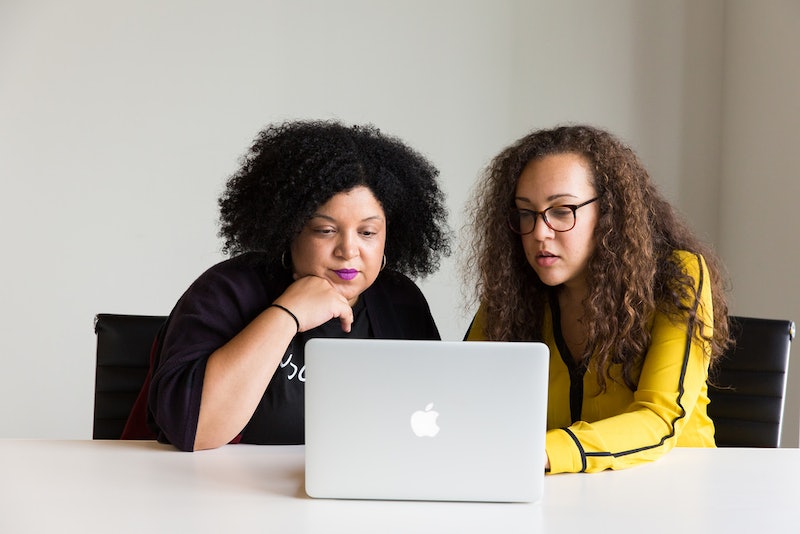 Even if we don't feel like one, it's important that we appear like a grown-up functioning woman in the workplace. Job tips for women tend to center on looking the part: I typically show up to work with matching shoes, hair that's been combed within the last three days, and (probably, mostly) hangover-free. But there is so much more to navigate in the new career world, especially if you're a recent college graduate.

I like to think I'm good at making small talk with people in my department and I can write a darn good email. But I wasn't always this way. When I first started my job, I'm sure I looked terrified at least half the time. I didn't know what was considered a "business casual" wardrobe, would avoid the common kitchen if I heard someone else in it (so as not to have to have awkward water-cooler conversations), and essentially hid in my cubicle whenever possible. I felt like a little kid playing in the grown up's world, and I was convinced that no one saw me as an adult.

Esquire editor and Entrepreneur etiquette columnist Ross McCammon is here to help people like you and me. His new book Works Well With Others hilariously and helpfully describes his own rocky career history, and guides you along the path of acting like a professional grown-up in the workplace. To make sure you have your career together, McCammon has six job tips to set you on the right course for some of your job's trickiest times to navigate.

A Business Meal Is Not Your Sunday Pals Brunch Vibe

At some point in your career, you will probably have to eat a meal with someone important to your job. This is not the time to get a tipsy and eat a rack of ribs with your hands. Instead, McCammon suggests drinking no more than one drink — and only if your boss suggests getting a drink at all — and avoiding messy foods. Accept the fact that, often, you probably won't be talking business for most of the meal. Business meals are more for schmoozing than for getting actual business done, so don't ruin anyone's appetite by diving right into the heavy business talk.

Email Is Not The Place For Your Emoji Language

If you send an awkward, annoying, or unprofessional email, chances are, people in your office are going to be chatting about it. And considering that many jobs consider email the primary method of communication, you're going to want to listen to what McCammon's rules for making sure you handle yourself appropriately.

"You respond to email as if you were Robert De Niro," McCammon says. Which means: Skip the pleasantries and get down to business. Occasionally it will be appropriate to begin an email with "How was your weekend?" but for the most part people want to receive short, polite emails that convey a message as simply as possible. Don't write a paragraph when a sentence will suffice. Think like Robert De Niro and make your point.

You're going to have to work with an someone you can't get along with at some point. (Hey, maybe you work with one already.) Yes, they're obnoxious and infuriating and you probably want pull your hair out just thinking about them, but you're a grown-up and you have to learn to cope. That doesn't mean you can't address the problem. McCammon suggests calling them out on particularly jerk-like behavior ASAP. Ask them, "Why would you do that?" Best-case scenario: They knock it off and you come out of the situation looking like the adult in the situation. Worst-case scenario: Nothing really changes, and you try it again another day.

Nobody Loves a Meeting Chatterbox

Sometimes, as McCammon knows, knowing when to keep quiet is just as important as knowing when to speak up. Choose your words precisely, particularly during a long meeting, so you can make your point effectively and not drone on. If someone asks how a particular project is going, give the best Cliff Notes version you can give. Not only will people appreciate you not taking up all of their time, showing that you can be direct and concise is a huge skill in busy workplaces.

Learn to Make Small Talk Without Sounding Like a Robot

As an awkward human, it's like I'm programmed to be terrible at small talk. And I know I'm not alone. But according to McCammon, our awkwardness around those we don't know that well is actually the very thing the fuels small talk. As he writes:

The first thing to acknowledge in a small-talk situation is that we live in a society. And as someone who lives in a society, you have entered into a mutual agreement to speak when it would be awkward not to.

When you're forced to make small talk, get curious. Ask questions and be genuinely interested in what the other person says. Soon that small talk will turn into actual conversation.

Accept that You Won't Be The Best, At First

When you're new to a role, it's part of the job description to make mistakes. Though some of those mistakes may be bad, being ashamed of your mistakes or being so afraid of making them that you aren't willing to take risks, is far worse. Come to terms with the fact that sometimes you're going to screw up, and learn from those instances. You'll be a better, more confident worker if you can see mistakes as a learning opportunity instead of a soul-crushing failure.