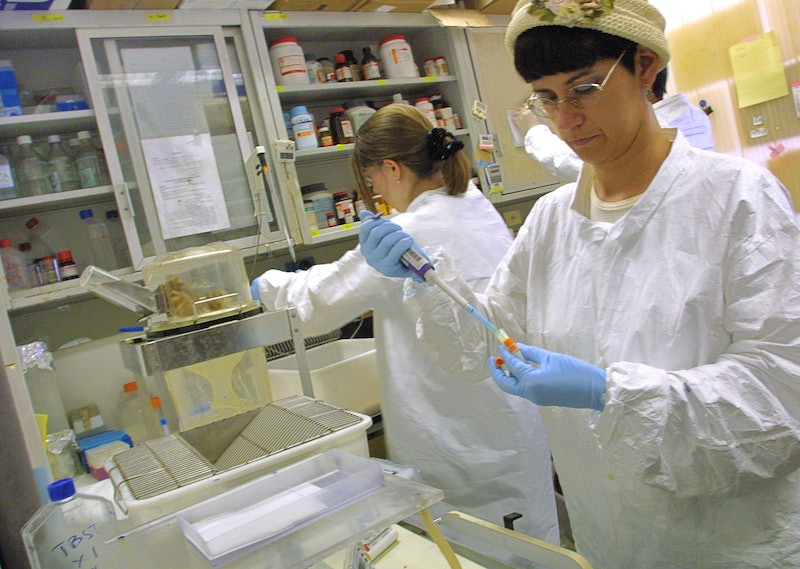 It's no secret that women are vastly underrepresented in science — so how to get more women climbing the ladder of scientific academia? Well, according to a study published in journal mBio this month, it helps to put a woman on the planning board of a conference. Researchers led by the Albert Einstein College of Medicine have published findings that indicate having a female committee member on board leads to a staggering 72 percent more female speakers at organized conferences.

Although more women are getting PhDs in life sciences than in previous years — 52 percent in 2011, compared to 13 percent in 1970 — a drain exists after graduation, when women tend to eschew research careers in academia for other prospects. But having women present at scientific conferences is a massive step in the right direction, claims lead researcher Dr. Arturo Casadevall, a microbiologist at the Albert Einstein College of Medicine:

Since talking at meetings is really, really important for a career in science; you can imagine that this would be a very simple mechanism for increasing female participation in meetings. It's a cascade effect — once you're a speaker, your work is recognized, and you are more likely to make connections, have your work funded, and to be invited to speak again. And when you speak at a meeting, your reputation at your home institution also improves, and that helps your chances of promotion.

Not so fast, Dr. Casadevall. Yes, getting more women into conferences will help women who are already in the field of academia, but it's not going to help more girls get into science. After all, it's not until grad school that science students are usually exposed to the world of conferences and symposia.

But in order to attend a conference and be a speaker, a scientist has to have something to share, and right now, women who are in scientific academia are systematically disadvantaged. They have more administrative paperwork to do than their male colleagues; they have more professional tasks; and even though they work longer hours, they're not published as much.

They also do their job for less money, plus maternity leave is still a huge issue for many women in academia. So although Casadevall's hypothesis might work for him and his male colleagues, it's not a solution. Because, for a field that should know first-hand, based on their studies, that men and women are intellectually equal, science is not doing a good job of applying their own findings.

The reason for the brain drain, evidenced in the gap between women receiving diplomas and women working in academia, has its roots in high school or even before. In their teenage years, girls wanting to go into the sciences can experience a massive hole in the support network critical for their success.

The Obama administration has attempted to fix this with their STEM initiative, meant to foster girls going into science, technology, engineering and math programs, but even that's flailing. There haven't been any updates to the program website this entire academic year (since last April, in fact). No matter, at least we have not-at-all- problematic PSAs like this one to help guide young women.

What these efforts don't address is that it's not that girls aren't interested: It's that their social and academic networks fail them from early on. A 2008 study by the American Mathematical Society revealed that analysis of math competition participants since the '70s showed a disproportional results for girls. "It is deemed uncool within the social context of USA middle and high schools to do mathematics for fun; doing so can lead to social ostracism," the authors wrote. "Consequently, gifted girls, even more so than boys, usually camouflage their mathematical talent to fit in well with their peers." And, BTW, saying that science is a "girl thing" doesn't help with the sexism: It looks to re-assign gender roles and lends a feeling of overcompensation.

The cultural issue is also, in part, an American problem. The study also found that greater achievement and participation came from students born outside of the U.S. "Innate math aptitude is probably fairly evenly distributed throughout the world, regardless of race or gender," said Titu Andreescu of the University of Texas at Dallas, who worked on the study. "The huge differences observed in achievement levels are most likely due to socio-cultural attributes specific to each country."

Could this be why only 20 percent of physics Ph.D recipients are women — and half of them aren't from America?

Yes, it's a more equal playing field if more women are speaking at conferences. But this alone won't be enough: It'll only help women who are already in the academic world, but the real problem is getting them in there by stopping the brain drain. Until then, the findings do little to bring women in to academia, especially the fresh faces needed to keep the field innovative and dynamic.

More like this
What Is Brad Pitt’s Net Worth? The Bullet Train Star Now Makes 8 Figures Per Film
By Hugh McIntyre
Gemma Collins' Net Worth Is Only Going Up
By Catharina Cheung
What Is Beyoncé's Net Worth? The 'Renaissance' Hitmaker Makes 9 Figures On Tours
By Radhika Menon
10 Easy Beauty Swaps You Can Make Before Plastic-Free July 2022 Ends
By Audrey Noble and Erin Stovall
Get Even More From Bustle — Sign Up For The Newsletter