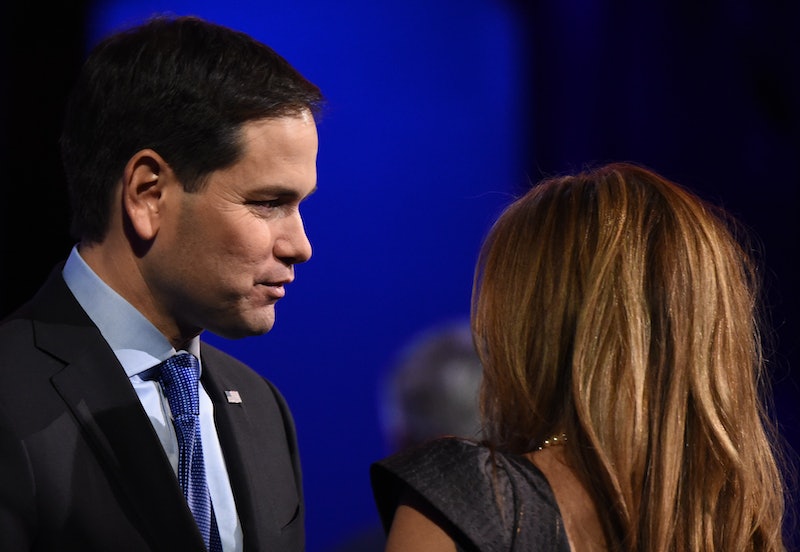 Well, the third Republican debate is all done. We won't be seeing another one of those for, what, two weeks? The latest debate, which played out Wednesday night on CNBC, received some very mixed reviews. But there was nonetheless a bunch of surprising, tense, and downright dramatic moments on the stage. For example, Marco Rubio's Sallie Mae joke sure was strange, because he made it sound like he had to explain his own student loan debt to his wife.

All politicians would like to have a few successful zingers sprinkled into their rhetoric, there's no doubt about that. Showing some humor and good cheer can earn a warm reception, or so the thinking goes. And for a candidate of Rubio's fresh-faced enthusiasm, a wry joke can be a very effective means of connecting with a sympathetic audience.

There are really only two potential risks: flubbing the joke's delivery, or telling a joke that has some troubling or damaging implications. And while this particular bit from Rubio was by no means as inflammatory or controversial as, say, anything Donald Trump has ever said, it did rub a bit the wrong way. Here's the joke, as per The Washington Post 's transcript of the debate.

Rubio actually tweeted the line out prior to the debate in response to a question about how the debt issue was personal for him. So it was not a spontaneous crack, in other words — which was pretty obvious from the delivery.

The line got the audience laughter it was aiming for, and obviously, it could just be a joke that isn't rooted in reality. But if it raised a very particular thought in your mind, you're not alone. Did Marco Rubio really have trouble explaining who "Sallie Mae" was to his wife? Did he really need to explain it at all?

Because when you get down to brass tacks and past the potential embarrassment of discussing debt issues — which you'd think you would've already fully informed your spouse about, but hey — that's about a 10-second conversation. And even further, the implication that Rubio's wife, Jeanette (herself formerly a bank teller, according to The Tampa Bay Times), wouldn't have known what Sallie Mae was without him having to explain it has stirred up some discussion. Some on Twitter have dubbed it a mansplaining, or some variation thereof.

“It’s hard to tell which is more offensive: Rubio’s rhetoric, or his policies," Kaylie Hanson, the DNC's director of women's media, tells Bustle. "This is the candidate who supports an abortion ban without exceptions for rape and incest, and opposes equal pay legislation. Bottom line? Marco Rubio is backwards and wrong for women."

It's impossible for any of us to know just how factual the story is. Maybe Jeanette Rubio didn't know who the student loan provider was. And if so, there's no shame in that. And furthermore, there's absolutely no reason to think this will be an issue for Rubio going forward. GOP primary voters, suffice to say, are probably not going to agonize over the potentially sexist implications of a mid-debate jibe. But in a GOP debate field that's been heavily scrutinized on women's issues already, that joke landed badly with any liberal, feminist-minded viewers who were along for the ride.