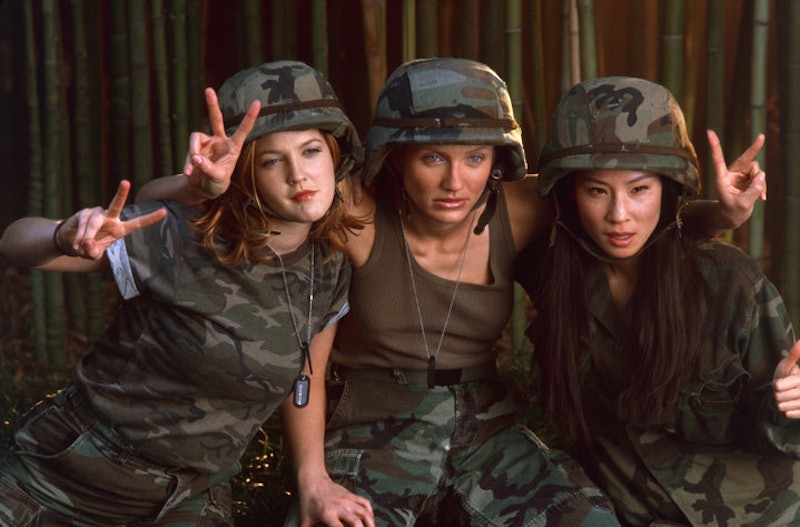 Hollywood loves a good remake. Just 15 years ago, a reboot of the classic TV series Charlie's Angels landed in movie theaters starring Cameron Diaz, Drew Barrymore, and Lucy Liu. But those actresses weren't among many people you forgot were in Charlie's Angels , released in 2000. Many of the stars in the film were big at the time — among them: Friends star Matt LeBlanc plays a love interest to an Angel, and comedian Tom Green appeared opposite then-wife Barrymore. Some stars were not yet household names, such as Melissa McCarthy, who was 10 years away from her breakout role in Bridesmaids.

Fifteen years ago, reviews of the movie were generally positive, with Charlie's Angels receiving a 67 percent "Fresh" rating on Rotten Tomatoes. The comedy-action film is a big screen remake of the classic TV series of the same name, which ran on ABC from 1976 until 1981. In the hit series, the Angels were famously portrayed by Farrah Fawcett, Kate Jackson, and Jaclyn Smith. The mysterious and unseen Charlie was voiced by John Forsythe in both the TV show and movie versions, because no one else has that signature voice.

In honor of the film's 15th anniversary, here are some of the folks you may have forgotten were in the Charlie's Angels movie.

The legendary actor played the ever present John Bosely, Charlie's assistant and the Angels' handler.

Before she was made us laugh in Bridesmaids and Mike & Molly, McCarthy had a small role as the perky Doris, who tries to greet and befriend Liu's Alex, but the Angel isn't feeling it.

The Friends star played a role that wasn't too far from Joey Tribbani: Alex's boyfriend Jason Gibbons, an action movie star. Little does he know that Alex is actually an action hero.

The comedian played Chad, the boyfriend of Barrymore's character Dylan. At the time, Green and Barrymore were dating and would marry a year later, to add some meta-ness to this role. Unfortunately, the marriage only lasted until 2002.

Whether it's a big screen movie, a TV series, or the radio, LL Cool will find his way in there. In Charlie's Angels, the NCIS: Los Angeles star makes a cameo as the mysterious Mr. Jones.

The Seven Psychopaths and Cowboys & Aliens actor played the kidnapped tech mogul Eric Knox of Knox Enterprises. He also has some killer dance moves (above).

You may know the British actor from his infamous role as Dr. Frank-N-Furter in The Rocky Horror Picture Show, but in Charlie's Angels, Curry plays Roger Corwin, the owner of Redstar Communications and suspected kidnapper of Knox.

It feels like Wilson was pretty much in every early 2000s movie and he was even in Charlie's Angels as Peter, the love interest of Diaz's Natalie.

The Back to the Future and Hot Tub Time Machine star played the mysterious Thin Man in Charlie's Angels.