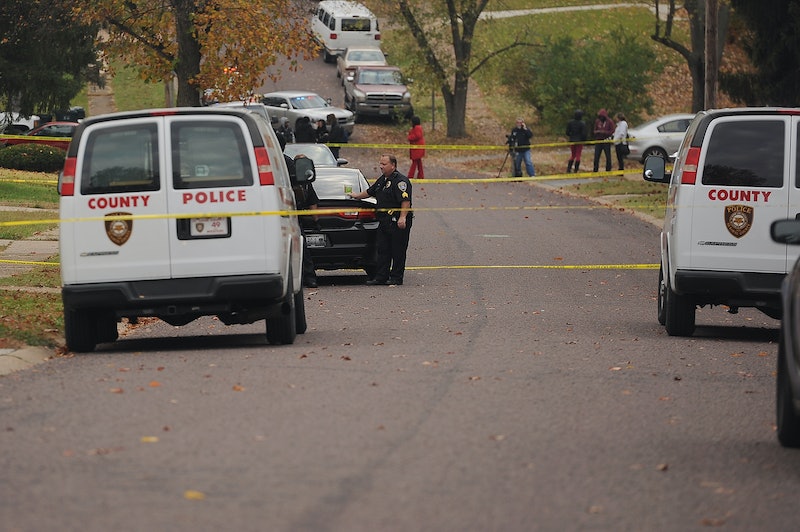 On Wednesday, authorities confirmed that an 18-year-old man was injured by a gunshot wound to the face at 2 p.m. in a St. Louis suburb, not far from Ferguson, Missouri. According to officials' accounts, the man allegedly led police on a foot chase after officers responded to a call that indicated a man may have been suicidal. When authorities approached him, he allegedly brandished a gun and began firing at them and then reportedly fled after an officer attempted to use a Taser on him. Shortly after, officials claimed the man was found on the ground with a self-inflicted gunshot to the face. But witnesses have come forward to heavily dispute that narrative. So, what exactly happened in Normandy, Missouri?

The Huffington Post and The St. Louis American, citing public records, report the injured man is Amonderez Green, but officials have not yet confirmed his identity to the public. Law enforcement claimed that the man's wound was self-inflicted and not the result of an officer opening fire. Officers claimed they found him already wounded after their foot pursuit and treated the incident as an attempted suicide. They then reportedly administered first aid and he was transported to a hospital.

Witness accounts differ greatly, however. According to Dominique Clemons, a witness who spoke with The Huffington Post about the incident, the man may have been giving up running from police when officers allegedly opened fire on him. Clemons said:

While he was running, he turned around to face the police and that's when he got shot in the face. I saw his body drop. They shot him in the face, his whole right side of his face was gone, his top lip was gone.

Another witness, who asked not to be identified out of concern for her safety, told HuffPo she heard six or seven gunshots and claimed she saw officers shoot at the man. "It was not a suicide. At all," she said. Video footage shared on Twitter from the time of the incident indicates that someone may have also shouted, "Please don't kill me! Oh God!"

Normandy is just two miles south of Ferguson, where one year ago Michael Brown was shot and killed by officer Darren Wilson. Ferguson officers were on hand with Normandy police when responding to the call. In an interview with St. Louis Public Radio, Normandy Police Cpl. Tameika Sanders indicated that it was a Normandy officer who shot at the man after he had allegedly opened fire on officers first. That officer has since been placed on administrative leave.

A press conference was held Wednesday evening by the Normandy Police Department to address the incident. Sanders asked that the public bear with the police department as they continue to piece together what happened. Though there appears to be some witness footage online, Normandy officers are not required to wear body cameras and thus there is no available first-person footage. The incident is still under investigation and Sanders is witnesses or asking anyone with information to contact St. Louis County police. The injured man is reportedly in critical condition as of Wednesday evening.