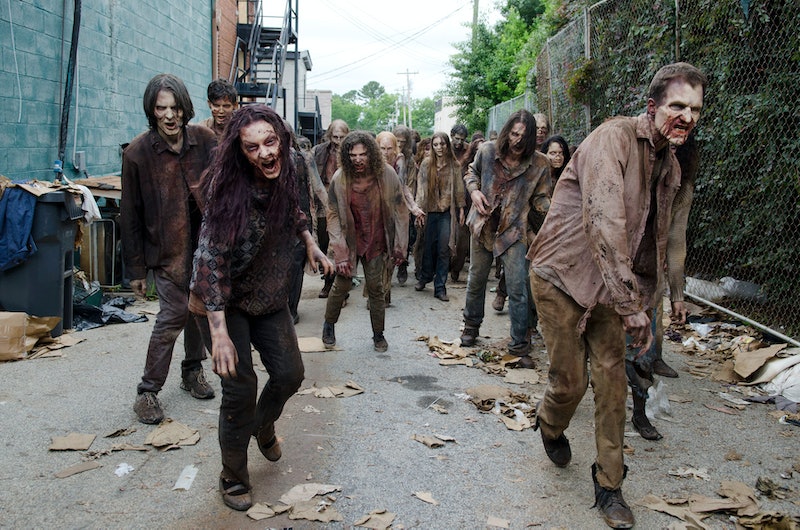 I don't think it's an exaggeration to say that this Sunday may bring one of the most highly anticipated episodes in Walking Dead history. The is-he-or-isn't-he question surrounding Glenn's unexpected, supposed death is still on everyone's minds, but the answer to that (hopefully) isn't the only reason to be excited. The description for The Walking Dead episode "Here's Not Here" teases both a new character and new location, the latter of which should make your ears perk up. Could this be the introduction to Hilltop Colony from The Walking Dead comics? Fans of the comics have been waiting for this setting to appear for a while, and TV viewers might want to brush up on their knowledge.

We've seen quite a few location changes in the past six seasons, some much worse than others (Woodbury, anyone?), but Hilltop Colony is a residence that we might grow to love. The Virginia town, much like Alexandria, is surrounded by high walls, houses roughly 200 people, and sits about 20 miles from the Safe-Zone. While there are people we will grow to love from the Hilltop Colony, some pretty horrible enemies will eventually come into play there too. So don’t get your hopes up too high for a happy ending. Here's everything you need to know about Hilltop Colony, in case it make its TV debut this Sunday. Of course, spoilers for The Walking Dead comics below.

Jesus, as he’s commonly referred to, is a member of Hilltop Colony. Rick will not trust him at first (then again, he trusts no one these days), but will eventually become one of his most trusted allies. Jesus is super smart, and logical when it comes to problems with both walkers and living enemies. He can fight well too. Basically, he's the Rick of Hilltop Colony, and luckily he's still alive in the comics.

Gregory is the original leader of Hilltop Colony, but I don't think the show would introduce him immediately. He’s an all-around jerk, and acts extremely disrespectfully towards women. Unfortunately, he’s around in the comics for quite a while, though he eventually gets what’s coming to him.

The Saviors, led by big bad Negan, are enemies of the Colony, which makes them enemies of Rick's group once they arrive. They're one of the nastiest, cruelest, most dangerous groups in all of The Walking Dead comics.

In the comics, Maggie gets pregnant and Glenn decides that they should move to Hilltop Colony because it’s safer. Unfortunately, Glenn does not make it to their new home and is instead killed by Negan. After his death, Maggie starts her life over there and becomes the leader of the Colony, with Jesus as her right-hand man.

While I want to meet Jesus and Negan, I also want to put off Hilltop Colony becoming part of The Walking Dead just a bit longer because of what goes down there in the comics. Sometime down the road after the discovery of the Hilltop, a battle of epic proportions occurs. Rick puts together an army, and things get crazy.

So get ready, because if The Walking Dead decides to add Hilltop Colony to the TV series already, a slew of new characters and mayhem will follow.