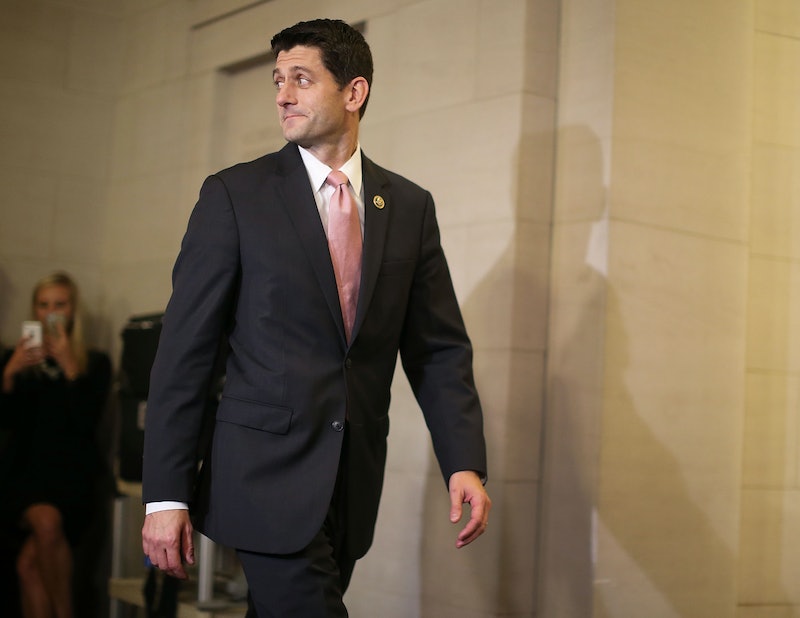 On Thursday morning, as predicted, Republican Speaker nominee Paul Ryan won enough votes to become Speaker of the House, replacing John Boehner. The vote comes a day after Ryan was officially nominated by his party as its preferred choice to replace Boehner, who had served as House Speaker since 2011. Initially publicly skeptical about taking on the role, Ryan was implored to run for House Speaker by high-ranking members of his party after Kevin McCarthy dropped out following inflammatory comments on Hillary Clinton and the Benghazi hearings. He's now the 62nd House Speaker.

Boehner made a tearful goodbye speech on the House floor, pulling out a box of tissues. "I leave with no regrets, no burdens," the AP reports that Boehner told the assembled lawmakers. "If anything, I leave the way I started, just a regular guy, humbled by the chance to do a big job."

Ryan needed at least 218 votes to be elected Speaker, and easily netted that on Thursday morning. As of Thursday, longtime Speaker Boehner will no longer hold that role, having announced his abrupt resignation earlier this fall after Republican infighting over the spending bill and its inclusion of Planned Parenthood.

Mitt Romney watched from the House floor, along with his wife, Ann. Although Ryan has served in Congress for well over 15 years, he's perhaps best known to the public as one-half of Romney and Ryan, which went up against Barack Obama in the 2012 election.

Ryan tweeted a photo of himself signing the paperwork, titled #SpeakerRyan.