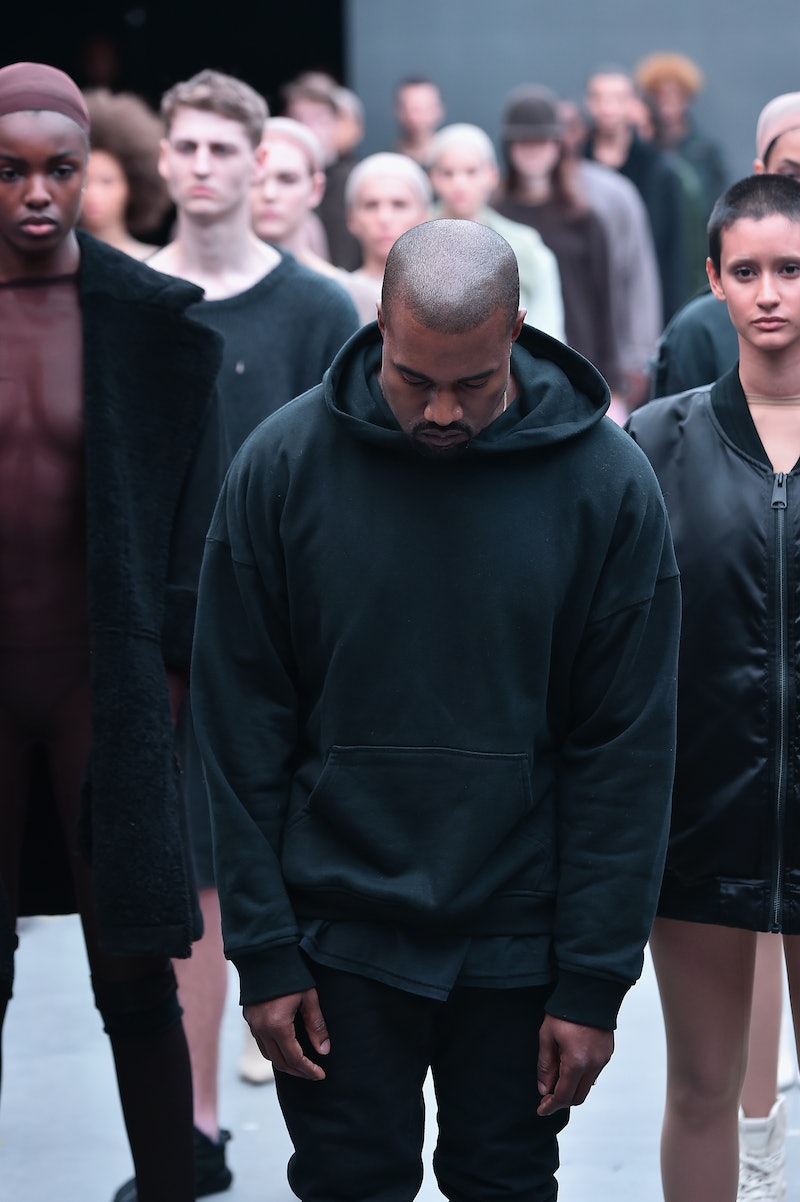 You, like me, might have a special affinity for sweatpants — the more distressed and worn in, the better. Hey, it's practically a uniform requirement for writers! But while Yeezy's clothing collections so far have been very athleisure-oriented, the price points, on the other hand, are not so "I freelance" friendly. Yeezy Season 1 prices are, to use a Kanye-ism, quite cray.

How cray could the price tag on a sweater with what look like moth holes or a pair of knee-grazing cotton shorts be, you wonder? The collection, which will be available at 200 stores and sites worldwide, including Mr Porter, Barneys, and Adidas, ranges from $130 - $4,550. A sweater will run you nearly three grand, but shorts are a comparably reasonable $350.

While that marinates with you for a while, let's talk about the designer himself, for a moment. Kanye West, alias "Yeezy," isn't at all shy about comparing himself to Jesus Christ {the name of the line itself appears to be a reference). Now, I'm not a religious person, but seeing these prices, I can't help but wonder: WWJD? Charging $2,600 for a top that looks like it is actually from B.C. doesn't seem very Messiah-like to me.

But that's none of my business. Back to the clothes. The entire collection represents an aesthetic that is powerful and totally current.

West, and his famously fashionable family, are no strangers to well-made, expertly-constructed designer clothes (his daughter North West was spotted channeling Carrie Bradshaw on Wednesday in a Balmain jacket and tutu), but some of these distressed pieces look like something you could DIY yourself. So how can he charge essentially the same price for this sweater as a double-breasted Balmain jacket? It almost seems like a statement that West, as an artist and a self-described revolutionary, can do whatever he wants and still sell out. Because, in fact, some of the pieces are actually sold out — and the collection only just launched Thursday.

Here are some of the pieces for sale online, along with their hefty price tags, so you can see for yourself that art doesn't necessarily come cheap.

The name of the sweater, "Destroyed," speaks for itself. Trendy, yes. Worth more than rent on a NYC apartment? Maybe not.

Isn't this what bullies always used to wear in 1980s movies? I'm pretty sure Brand from The Goonies started this trend.

Kudos on a fancy, trendy drop crotch silhouette, but still...

The only person who could and should wear this is Lenny Kravitz, and maybe Kim K. But I will say, the $350 price tag is starting to sound reasonable at this point.

5. The "This Old Thing?" Sweatpants

What was I just saying about "reasonable?" I forget now, because these are almost $600.

These also seem to be inspired by a classic film: Star Wars. Gotta go try to sell all of my old gym clothes now to see if I can pay off my college tuition.

The accessories, however, are in-line with current market prices, and the bags, some of which are suede, actually prices less than a lot of comparable items. This is a lot cheaper than, say, a Chanel backpack.

This is a handsome bag, I must admit. And, for its large size and luxe material, the price seems fair. I must not have been the only one to think so; the Weekender is already sold out — it's only been a few hours since the collection launched worldwide!

More like this
How To Wear A Bucket Hat Like Rihanna, Dua Lipa, & More
By Allie Fasanella
Serena Williams Looked Like Royalty In A Bodycon Velvet Dress
By Allie Fasanella
Hailey Bieber Is Making Cargo Trousers Work — Here’s How You Can Too
By Catharina Cheung
If You Don't Like Tight-Fitting Clothes, You'll Love These Cheap, Stylish Pieces That Fit Away From Your Body
By Claire Epting
Get Even More From Bustle — Sign Up For The Newsletter