I know there are a lot of One Tree Hills fans out there, and I was one of you, but let's be real about one thing: Brooke Davis was the best character. Like, by far. Brassy but vulnerable, she was able to take everyone else down a peg or two whenever they got a bit too into the soap opera of it all. Basically she rocked, and it resulted in us finding ourselves to be Sophia Bush loyalists, which is why Bush's One Tree Hill reminiscences on Bravo's Watch What Happens Live are more exciting than if any other cast member had done it. Especially when she throws shade in the direction of Chad Michael Murray.

Bush — who was 20 and a junior at USC when she got cast in One Tree Hill — seemed game to let her feelings known. This was especially true when a caller asked her if she still talks to Murray and Bush let out a big laugh, said "if you don't have anything nice to say don't say anything at all," and immediately started chugging wine. Basically she is a hero.

She did elaborate, however, when Andy Cohen asked what it was like to continue working with Murray after the split. She continued to prove that she's got a good head on her shoulders:

I mean at the end of the day we're grownups. I actually think what's interesting about it is when people split in a way that's unpleasant they usually just go on, quite literally, hating each other. But when you have to work with somebody for another half a decade, you kind of just have to deal with it. Because for me at the end of the day my job is my priority, and so I think at the end of it it really let me just let go of it, and go 'look, at the end of the day we were just two stupid kids who had no business being in a relationship in the first place.' And to all the other co-stars who've worked it out, more power to ya.

Damn girl, you work that self-actualization. 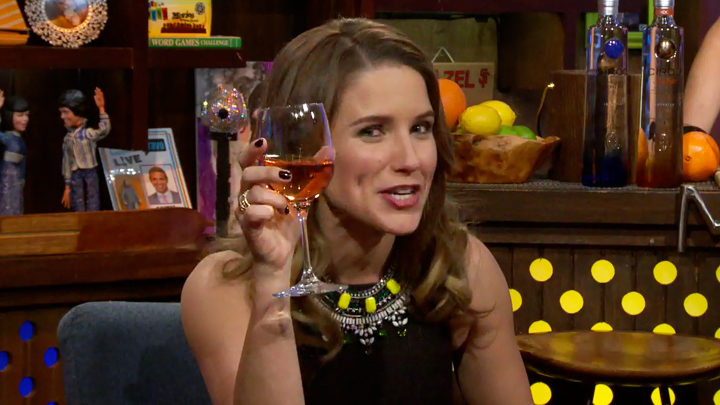