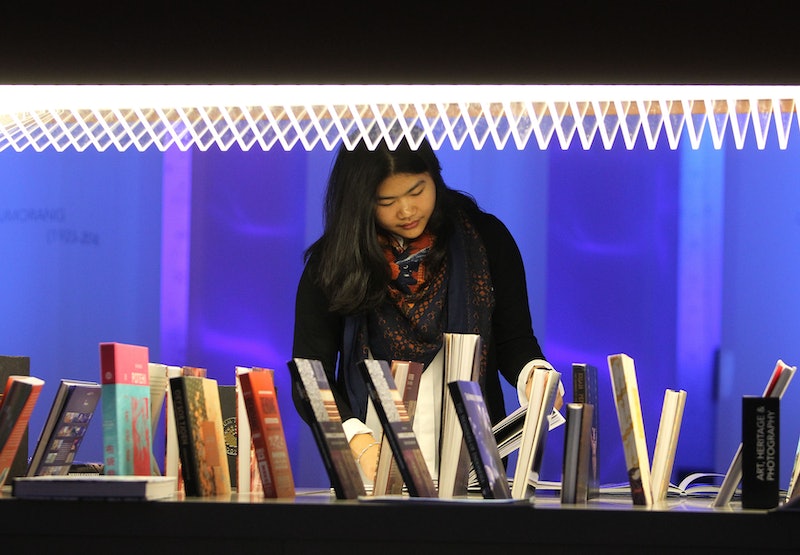 What a week it has been in the news. The week began on Monday with the terrible news of a school officer violently arresting a black female student, ads discussing periods got slammed, and the third GOP debate went down in Boulder, Colo. Not to mention: Halloween is on the horizon! There's a ton going on right now, but I'm here to help sort through the week's news and find some of the more pressing, enlightening, and interesting articles for feminists to read and care about this week. And don't worry, I definitely have a fantastic Halloween story in here for good measure (who doesn't love witches?!).

This week we will all want to get our Halloween reading in, so we'll start off with a cultural history of witches. I also want to make sure we're keeping up on the very unfortunate debacle surrounding public ads for period panties, and also issues surrounding the gender wage gap in the United States. Other issues like gun control as related to convicted domestic abusers need to stay on our radar as well, and there were some great pieces published about it this week. The biggest controversy this week was surely the actions of Deputy Ben Fields, who was fired after he dragged a student across the floor of her classroom. I made sure to include an insightful article about what this event brings to light about race and discipline in schools.

So, without further ado, here are five articles that feminists will find worth reading this week.

Ridin' Dirty: A Sweeping Look At Witches Mounting Their Broomsticks

This fabulous article from Broadly comes just in time for Halloween! This article gives an awesome cultural history of witches and broomsticks throughout the centuries. The article also details enthralling facts about medicine in witchcraft, male witches, and spells. From torturing alleged witches until they made confessions, to herbs inserted into the vagina, to the witches in Macbeth, this article by Nell Frizzell will pique the interest of nearly any feminist woman this Halloween.

Will Ads Saying "Period" Be Deemed Inappropriate For Public Transit?

Bitch Media's online editor Sarah Mirk wrote an excellent commentary on the new Thinx period underwear ads that have been deemed "inappropriate" for New York public transit. Outfront, the firm that manages ads for the MTA (New York's metro system) stated the ads "seem to have a bit too much skin" (the ads show women wearing shirts and the Thinx underwear). Further, when Veronica del Rosario, Thinx's marketing director, reached out to Outfront over email to express her disappointment that ads catered to women were not approved, a rep from Outfront replied, "This is not a women's issue. Don't try to make it a women's rights thing." Mirk pointed out the double standard at play for MTA ads, noting that other ads that depict women in a sexualized manner are frequently plastered on public transit. Her piece is a great commentary on our squeamishness about periods and double standards surrounding public depictions of women.

Speaking to the essay from Jennifer Lawrence that was recently published in Lena Dunham's feminist newsletter, writer Katherine Reynolds Lewis wrote for Fortune this week that it might not be the best idea for women to take the well-meaning advice to simply ask for more money and remove troublesome words (like "just" from emails). Reynolds Lewis makes the point that, while it's utterly unfair, our society does in fact have certain expectations of women that differ from expectations for men, so it won't necessarily pay off for women to adopt male behavior in the workplace, and women could in fact end up being penalized for bucking gender norms.

As an alternative that is based on research conducted by Joan C. Williams (a law professor and director of the Center for WorkLife Law at the University of California, Hastings), women should try, for example, asking for a raise but framing it in a way so that it sounds as though the whole department will benefit. This is a controversial strategy, but the nuanced manner in which Reynolds Lewis writes about this issue is a great piece for any professional woman to check out.

Domestic Abusers Get To Keep Their Guns. Here Are The Big Reasons Why.

While convicted domestic abusers are prevented by federal law from purchasing firearms, there are often few, if any, measures taken to remove guns they already own. Jennifer Mascia wrote for The Trace this week that each state is left to decide if and how they will remove firearms from the possession of convicted domestic abusers, meaning there is no uniform legislation at the federal level that would ensure all domestic abusers no longer have access to their own guns. Mascia details several other reasons why domestic abusers are often able to keep their guns, including the length of time it can take for protective orders to be processed and the fact that federal law only considers a violent crime against women by their partners if the woman is married to her abuser (this is called the "boyfriend loophole"). This is an eye opening article we should all pay attention to.

Richard Faucet, Richard Perez-Pena, and Alan Blinder wrote an insightful piece for The New York Times this week about race and discipline in public schools following the violent arrest of a young, black female student by a white male officer at Spring Valley High School on Monday. The article notes that the violent arrest at Spring Valley follows a national trend that shows students of color are punished more severely than their white counterparts. The authors further detail statistics about the Richland County school districts, which also show a trend of students of color being punished more frequently than white students. The information provides a great deal more insight into Monday's events.