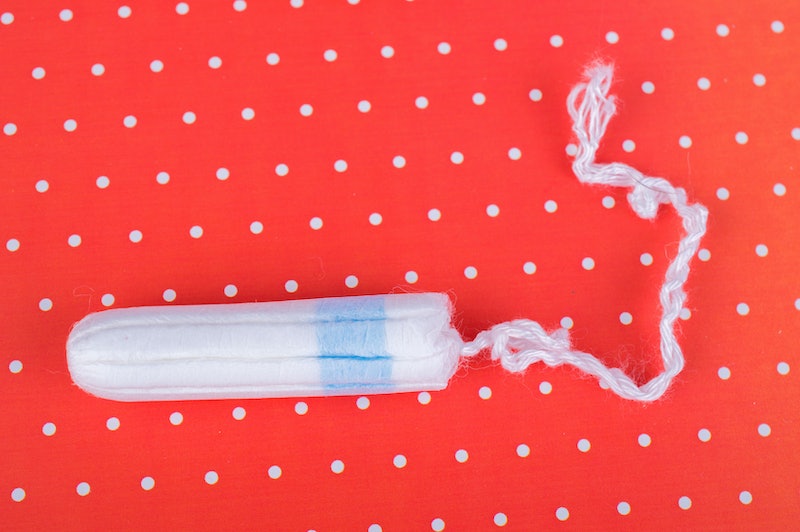 If you've ever scratched your head wondering why it is tampons and other sanitary items — while a medical necessity — are not only sold as commercial products, but are taxed as such, you're not alone. If you check the beautifully sarcastic #TamponTax tweets parodying their "luxury item" status, you'll see just one of the many kickass ways people are fight back on social media. While we have not even begun the #journey of trying to get sanitary pads and tampons for free (you know, for people who cannot afford to purchase them, and also can't afford to bleed everywhere at work while trying to earn enough money to survive) we have taken a small step in the right direction: a movement (and bill!) to cut the extra tax famously known as the "tampon tax," which sees a VAT of 5 percent chargeable on sanitary goods.

Surprising to approximately not one person paying the least bit of attention to how society feels about half of its population, this past Monday, MPs voted against the bill, and the move to cut the tampon tax by a slim 305 to 287 votes. So while we have some players on team "decent and logical living regulations for womankind," it seems we have a bit more convincing to do.

You'd think this would be common sense but alas, it isn't: women are being taxed for, uh, basically being alive, and having a healthy, functioning system that you kind of need to keep the human race going. Contrary to what Congress seems to think, having your period is not a luxury. It's not even something we can come up with a comparable alternative to relate to for men. So instead, the good people of Twitter have taken to a hilarious way to spread the message: the hashtag #TamponTax features women of all kinds using tampons as "luxury" items — in wine glasses, draped over their ears as diamonds, on a silver platter. It's great, and serves to spread an even more important message. Check out some of the funniest below:

A glass of luxury with your dinner?

Just kicking back for an afternoon of luxury.

Weird, new idea: only people who bleed out their genitals can make decisions about what's "medically necessary."

Hmm... what other untaxed things could we start using instead?

Just pampering herself with some luxury.

So sad it only happens once a month.