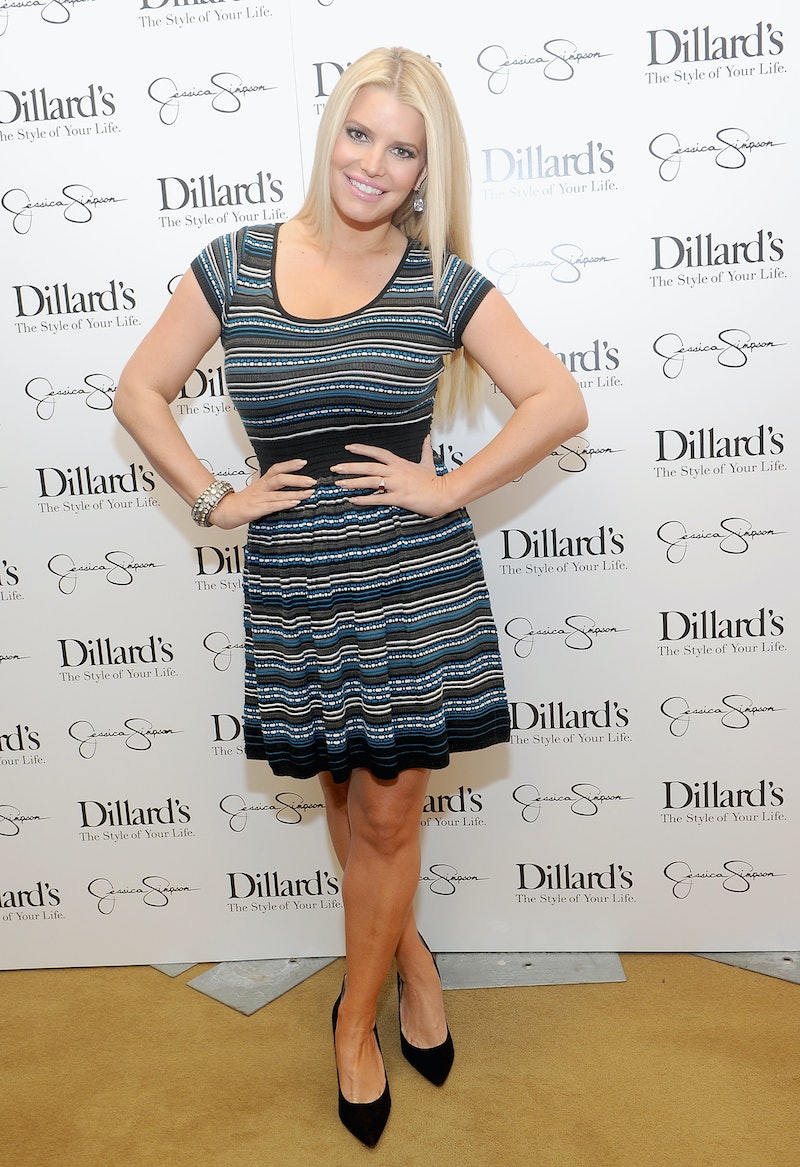 Jessica Simpson is fed up with the way the media covers pregnant celebrities. Simpson appears on the February 2014 cover of Redbook and in the issue is open about her opinions on the harsh and insulting coverage women in the entertainment industry receive while pregnant.

I never listen to it, no matter who the press talks about when they're pregnant. It's ridiculous and unfair. I think any woman who is pregnant and creating a life is pretty much entitled to eat whatever she wants as long as she's healthy. I wasn't going to let the media take away from what was one of the happiest times in my life.

She's absolutely right. Gossip magazines and websites tend to point out things like what a woman is eating while pregnant and whether or not she's still exercising and then, immediately after they have a child, stories begin about how fast they're able to lose weight. Props to Simpson for pointing out that she was "creating a life" for crying out loud!

Simpson is far from the first celebrity to point out the insensitivity of the media. I don't know if you remember (just kidding, you totally do) but last year, Kim Kardashian's pregnancy was very, very, very highly publicized which, granted, is maybe how she would've wanted it, but she definitely didn't want the horrible, insensitive comments regarding her weight. No one would. Kardashian took a different tactic than Simpson and rather than just talking about the issue, posted a scandalous photo her herself to Instagram which she called her "big, like, middle finger to the world on everyone that called me fat" in an interview with Jay Leno.

While everyone won't agree on Kardashian's particular way of striking back, she continued with a statement that echoes Simpson's words. "It really hurt my soul. I was gaining weight because I was pregnant, and it was just really hard to read all these stories and hear all these nasty things."

Another reality star, Nicole "Snooki" Polizzi spoke out about the scrutiny of women during and post-pregnancy in her book, Baby Bumps. (Yes, she has a book. Actually, she has four.) Snooki says, "If you weren’t on the cover of In Touch Weekly in a bikini within two months of giving birth to talk about your salsa workout, you were a fat, lazy loser."

So maybe you're thinking, but these women put themselves in the public eye on purpose and this is just what comes with the territory. Sure, but that doesn't mean it should come with the territory. A lot of terrible things could be justified using that logic, so maybe the change should start here. Let a lady make a new human inside her body in peace.

More like this
Sandra Bullock, Girlboss Extraordinaire
By Matt Harkins & Viviana Olen
Here's How To Practice Self-Love In Small Ways Every Day
By Mackenzie Sylvester
Kendall Jenner Isn’t Ready To Have A Baby Amid Her Mom’s Wishes
By Jake Viswanath
Kim Kardashian Reacts To Kanye West’s Diss Song “Eazy” On 'The Kardashians'
By Jake Viswanath
Get Even More From Bustle — Sign Up For The Newsletter