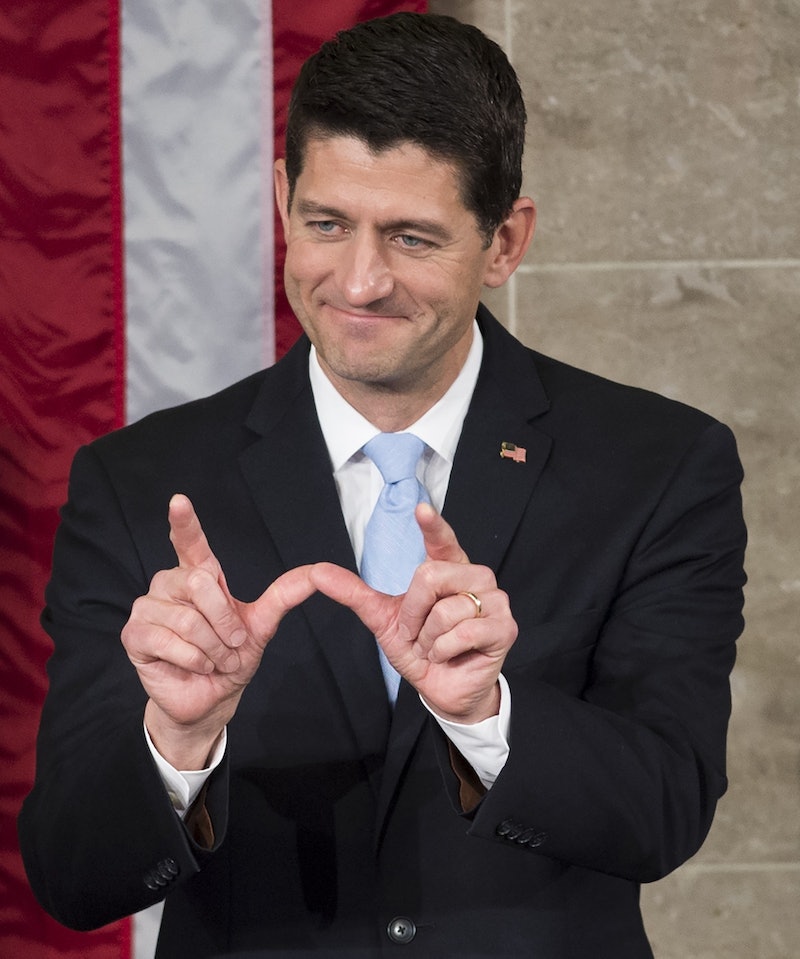 The Republicans finally got it together enough to elect a new Speaker of the House to replace John Boehner, who announced he would step down from the position in late September. Perhaps one of my very least favorite people in federal government, Rep. Paul Ryan of Wisconsin, was officially elected as the 54th Speaker of the House on Thursday afternoon. CNN reports that Ryan won the position by earning 236 votes. Ryan was only just nominated on Wednesday. Now, I want to just cut to the chase: Paul Ryan sucks. I think he has a terrible record on LGBT rights, women's rights, and he's just generally an ass. Of course, I'm pretty sure I am far from the only one who feels this way (thank goodness), and as a result of his new job in the House, we've rounded up some new (and classic!) brilliant Paul Ryan memes that mock the House's newest Speaker.

House Republicans have been deeply divided in recent months, and calls to defund Planned Parenthood or force a shutdown were causing serious commotion in the Capitol when Boehner stepped down. House Republicans pushed Ryan for weeks to run for Speaker, and Ryan stated that he wouldn't run unless all sects of the fractured Republican House guaranteed to support his candidacy. He also stated that he wouldn't take the job if it meant additional time away from his family. This latter condition is one that sparked a great deal of comedic commentary (including memes) that pointed out Ryan has opposed paid parental leave for new parents.

Well, the Internet is not a place where people can hide from their flaws, and thus we have an A+ collection of memes that more or less tell Ryan where he can shove it.

Pretty much! Thanks for nothing, buddy.

"Silly" and "prescient" are actually the perfect words to describe this meme!

Oh my god it's so true! And just in time for Halloween. Well played.

Honestly, I think he was loving the attention.

The Paul Ryan lifting memes were too great for me to choose only one.

Since it's Thursday and all: this meme flashes back all the way to 2012! Hating on Ryan is nothing new (no big shock there).

I'm with Meredith on this one.