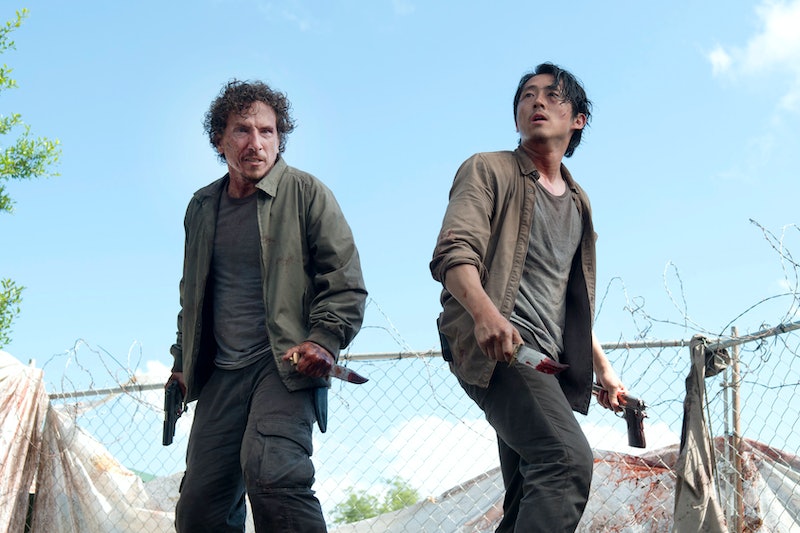 I can't even tell you how thankful I am that we don't have to wait a whole season to find out whether or not Glenn died on The Walking Dead, because the anticipation is killing me softly. On last Sunday's episode, Nicholas got hit with the walker vertigo blues, and shot himself when it looked like he and Glenn were at a point of no return. Unfortunately, he literally took Glenn down with him. It looked like Glenn's organs were eaten in front of his own horrified eyes, but let's really analyze what went down. Glenn was not included in The Talking Dead's death montage, and the producers have promised that he will return to the show in some form or fashion.

I'm too emotionally fragile to let myself fully believe it, but there is a distinct possibility that Nicholas fell on top of Glenn, that Glenn watched walkers rip out Nick's intestines, that he then somehow managed to wriggle under the dumpster, and that he was the one trying to contact Rick via radio before Rick's RV was attacked by Wolves. I would be surprised if Glenn was able to do all that without getting bit, but hey, at least he might be able to say goodbye to Maggie. I hate to admit it, but Glenn's arc with Nicholas, which started last season with Noah, does kind of make this a fitting death for him in a tragic sort of way. But it still sucks. So I reexamined the scene frame by frame, and here are some clues that I came up with for either scenario.

Alive: They're Wearing The Same Shirt

In maybe the most significant case of #twinning ever to grace our television screens, Glenn and that punk Nicholas both showed up to this fight with grey, slightly blood-stained undershirts. Considering that walkers bit into a grey shirt, that has to be a clue that there is some trickery at play, right? Even their other clothes are kinda similar.

Suck it, Greedo. You can clearly see here that Nicholas fell on top of Glenn. It almost looks as if Glenn strategically placed himself under him. It's a scary situation, but Glenn still knows how to think on his feet and may yet come out of this alive.

When he hits the ground, his vital organs are in fact exposed. Is this another red herring, or proof that he honest to Rick Grimes got chomped on by walkers?

Dead: I Know How Height Works

Those guts are way too close to his chest to not be his own. Right? There's no way Nicholas is that skinny, and the rest of his body that undetectable. Help!

Alive: There Is Room Under The Dumpster

Let's back up. All he needed were free hands, and he could have pulled through while they were nomming on Nicholas, easy.

Alive: Don't Know Much About Biology

He's surviving a lot of organ loss for a dead person. Can you live long enough to watch your own body parts being torn out and scream about it? I guess it's no different than surgery. Anybody wanna calculate that for me?

Alive: The Walkers Are Onto Him

Look at these two screengrabs from the beginning and end of this depressing shot. They are closing in on the space where the two survivors fell. Is that area covered by walker hands because they want a piece, or because they are trying to grab the legs of a tricky living human who has wriggled out of reach?