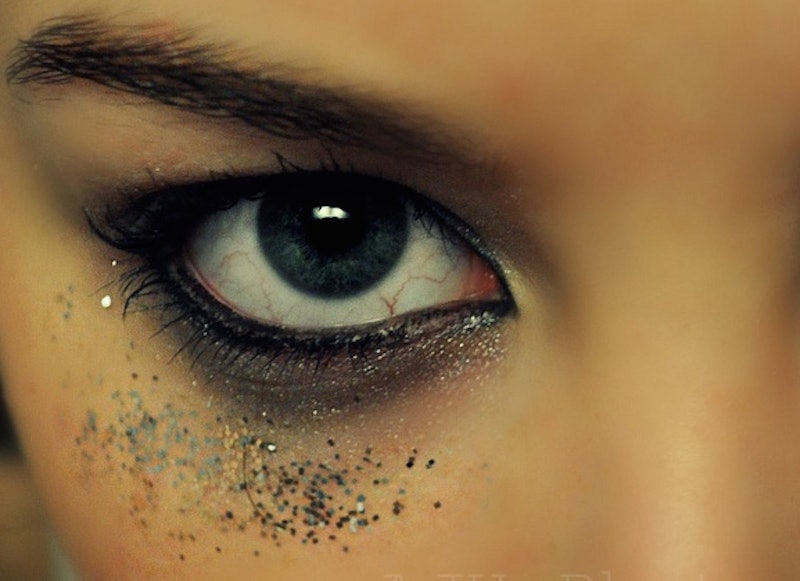 Anybody who's ever seen a shot of women in a spa knows that cucumbers on eyes are meant to be the go-to remedy for under-eye puffiness. (Also, it looks delicious.) But what actually causes puffiness or dark circles under the eye — and is it a sign of anything more sinister? The answer, it turns out, isn't just "tiredness," no matter what your mother or facialist tells you. Bags and dark circles are a complex thing, and they depend on heredity, hormones, diet, water retention, and fat in your eye sockets. No, really.

Oh, and by the way, bags and dark circles aren't a "beauty sin," no matter what anybody tells you. Hell, if you work a high-stress job, they're likely seen as badges of honor, proof that you're pulling your weight. And they're associated with age, which we should frankly all embrace a bit more (wisdom, grace, looking like Helen Mirren, etc). But if you really want to see them go, understanding the science behind them is going to be the key to depleting them.

Here are seven facts about eye bags and coloration under the eyes that may come in useful the next time somebody makes a crack about how "haggard" you look. "Actually, it's lymphatic fluid retention in my eye socket fat as a result of hormonal changes, and I look chic, thanks very much."

We don't habitually associate eyes with fat, but there's a layer around your eyes to keep them moving smoothly and protect them from force or problems. In technical terms, it's called orbital fat, and it lines your eye socket like a cushion, which is why your eyeball doesn't feel like it's grating against bone every time you look at something. *Shudder*

This fat tends to migrate southward, into the area under your eye, with age, because years of gravity mean that the muscles and collagen around it are weaker and less likely to hold it in place. Once there, it can be targeted by fluid that swells its cells; fatty tissue tends to be pretty vulnerable to swelling like that.

Bags Can Be Worsened By Salt, Allergies, And Poor Skin Care

The water retention under the eyes is also known as lymphatic fluid. It's a product of the body's lymphatic system, which drains off toxins and transports lymphatic fluid (a combination of water and white blood cells) around the body to fight off infection. This liquid is what ends up pooled under the eyes in the fat cells, and there are certain things that seem to exacerbate it.

Salt, obviously, makes the body keen to retain fluid, which means that you're more likely to get under-eye bags on a salt-rich diet. Allergies also set them off, because of nasal and sinus congestion interrupting the natural flow of fluids around the face. Interestingly, if you use the wrong skin care products around your eyes, you may actually make the problem worse: products that encourage fluid retention for "plumpness" will just keep the water sitting there. No bueno.

Bags Can Be More Pronounced During Your Period

The female body often seems to retain more water around the beginning of the menstrual cycle. Most of us experience this in a sudden rise in weight or shape; however, the fat under the eyes will likely experience it, too. The science behind this is still being developed, but it seems pretty clear that hormonal shifts, particularly in estradiol and progesterone, affect the body's fluid regulation, causing cells to retain more water.

Bags Can Be A Sign Of Thyroid Or Adrenal Problems

Mostly, bags aren't associated with any kind of health problem, but there's one specific kind that should be a bit of a warning signal. If you have constant, pronounced bags that are also accompanied by a deep dark strip of hollow skin underneath them, it may be an early warning sign of either thyroid problems, or adrenal fatigue.

Adrenal fatigue is caused by the body suffering intense, constant stress, and having its internal stress-reduction system break down. The thyroid, meanwhile, plays a huge role in the body's hormonal balance —and, as we've discovered, a bit of an imbalance there means bags can get very big indeed.

Dark Circles Are Caused By Thin Skin And Heredity

The circles of dark skin beneath our eyes that seem to signal "I have been wasted four days this week" are actually of a different breed entirely to eye bags. Darkness under the eyes develops because of the increasing thinness of the skin there as we age; the older we get, the more it thins, and the more dark blood vessels underneath become visible. Why does it thin? Same reason fat migrates out of the eye socket: our body loses its ability to hold things up, and it sags. It's already one of the thinnest parts of skin on the body.

Heredity, however, also plays a huge role in the development of dark eye circles. It's called genetic hyper-pigmentation, and it means that some people simply inherit darker skin around their eyes from their parents and grandparents. There's very little you can do to change this if you have it — but a beauty tip currently going viral tells those with this kind of hyper-pigmentation to use red lipstick on the under-eye area to effectively camouflage the darkness under cosmetics.

Anecdotally, we associate eye bags and dark circles with tiredness, but the science on why this is so doesn't appear to be crystal-clear yet. Not a lot of science has been done on the subject, but it seems clear that dark circles, rather than eye bags, are the more reliable indicator of a tired person, because fluid retention seems to be caused by other things. As for dark circles, possible explanations are that blood tends to pool in the face when you're lying down, and that darkness may also be a result of dehydration, a common accompaniment to exhaustion.

The "Cure" Is Extreme

If you're thoroughly plagued by your under-eye bags, there are cosmetic procedures to "fix" it. They sound completely bonkers and a bit scary, though. One is a surgery called blepharoplasty, which is a general term for surgery on the eyelids, but can mean removing the fat underneath the eye socket altogether. Another option is laser resurfacing using a carbon dioxide laser, which doesn't remove the fat, just tightens the skin over the top.

However, temporary fluid build-up can be tackled by something simpler: lymphatic massage. It stimulates the lymph glands of the face and enhances their ability to drain fluid, and you can have it done professionally, or pick up tips on how to do it yourself online. Note: it's not recommended to get it done while you're menstruating, because of the hormonal effects on lymphatic drainage.

A third option? You could just embrace them — dark circles and bags can make you look mighty mysterious and sexy. Just ask Queen B.

More like this
10 Stylish Plus-Size Boots That Will Fit Wide Feet & Calves
By Dominique Norman
All The Products Hailey Bieber Used For Her Birthday Makeup Look
By Olivia Rose Ferreiro
10 Makeup, Hair, & Skin Care Gifts That Beauty Lovers Will Drool Over
By Erin Stovall
Kim Kardashian On The Beauty Hack That “Changed My Life, My Skin, My Confidence”
By Taylor Jean Stephan
Get Even More From Bustle — Sign Up For The Newsletter