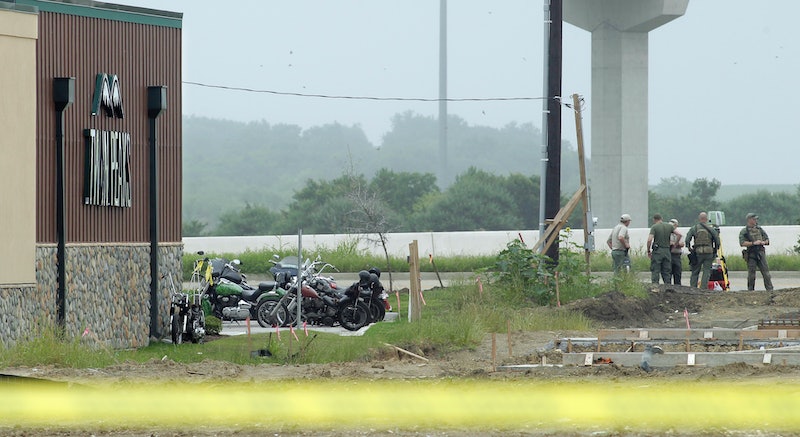 On May 17, a massive shoot-out in Waco, Texas, between biker clubs and police in the parking lot of a local restaurant called Twin Peaks resulted in the deaths of nine bikers. In addition, 20 at the scene were wounded and 177 were arrested and taken into police custody. Autopsy reports of the nine men who were killed were released in mid-August, but many questions still remained, and there is a lot we still don't know about the Waco shooting.

For one, ballistics reports were not released with the autopsies, leaving open the question of who killed any of the slain men: the bikers or the police, or both. The police have stated that the gunfight was a shootout between rival biker gangs the Cossacks and the Bandidos, and now, surveillance video from inside Twin Peaks at the time of the shootout have been released, revealing the disturbing and gory chain of events that took place in May. The silent surveillance footage along with thousands of pages of police reports were obtained by CNN on Thursday may provide insight into remaining questions, but the video doesn't reveal everything that occurred.

While police have maintained that the shootout was initiated by the Cossacks and the Bandidos, members of the respective gangs have either accused their rivals, or have stated they didn't see what happened, according to CNN. Here are some of the questions that still remain over 5 months after the shooting took place.

The police reports include varied accounts of who fired shots first: the Cossacks or the Bandidos. Witnesses have so far claimed that their own club was not the first to start gun fire, and others have claimed they did not see what happened. Surveillance videos do not show the very first weapon being fired.

Why Did The Clubs Start Shooting?

Police documents reveal that the Bandidos, the oldest motorcycle gang in Texas, and the Cossacks had been feuding for several months over territory and respect. At the scene of the crime, Cossack members claim they saw a Bandido member run into one of the Cossack's prospective members ("prospect" in biker terminology), which was allegedly the cause of the initial brawl that then escalated into gunfire. The prospect in question, Clifford Pearce, told police that he was not run over, but it could have easily looked that way to others, given that he did not move quickly out of the way of the Bandido motorcycle.

Was The Shooting Pre-Planned?

Police argue that the clubs arrived to Twin Peaks with the intention of causing violence. Citing the amount of weapons and bulletproof vests recovered from the scene of the shooting, CNN reported a total of 480 weapons, 151 of which were guns. The remaining weapons were a combinations of knives, brass knuckles, batons, hammers, and padlocks wrapped in bandannas. Police contend that the gangs arrived to the restaurant knowing that violence would ensue, a claim that members of both clubs refute.

Who Killed The Nine Slain Victims?

Ballistics reports from bodies of the nine victims who were killed in the shooting have not been released, leaving open the question of whether police fire caused any deaths, or if gang members were solely responsible for the deaths.

Who Will Be Charged With The Murders?

So far, none of the 177 people from the scene of the shooting who were initially arrested following the shootout have been charged or indicted for the murder of the victims. Many of the bikers who were present at Twin Peaks on May 17 have maintained that they were hiding in the bathroom after first shots were fired, and many more have claimed they are innocent of any crime. Police and prosecutors involved with the case are currently under a gag order as a grand jury weighs the evidence.

What Will The Charges Be?

The only charges mentioned in reports thus far have been that of murder, but due to the gag order, information about the degree of murder or any other potential charges from the shootout has not been made public.