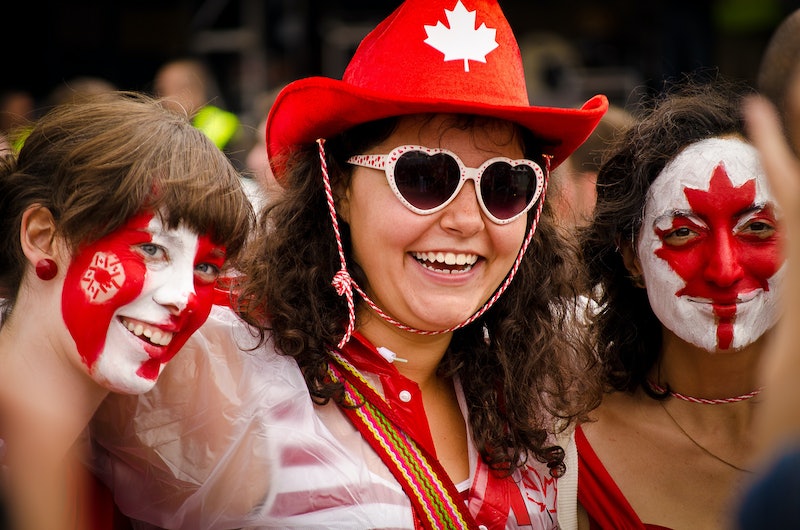 Did you know today is Canada Day?

Don’t feel bad, before I started dating a Canadian, I’d never even heard of the holiday either. Just like the proud, ignorant, American stereotype I am.

But alas, as it turns out, it's a real thing. On July 1, Canadians mark the enactment of the British North America Act, which finally united Canada into one country (under the British Empire, but details, details).

To celebrate their independence, er, nationhood, Canadians drink beer, eat poutine ("Canada's only original food," as my boyfriend Alex explains), and do other generally Canadian things, like considerately ask how your mother is doing.

Today, I celebrate Canada Day because I’ve managed to fulfill one of my strangest dreams: Since grade 7 (as they'd say), I've dreamt of dating someone who said aboot. (Blame a mix of Barenaked Ladies fandom and Degrassi: The Next Generation-watching.) Now that my dream has come true, I've been horrified to learn that Canadians don't actually say aboot, at least not like that. And while they are in fact very polite, and like hockey, a couple of stereotypes will only take you so far.

As a result, I've had to improvise. So here, based on the 2.5 Canadians I know, are some new stereotypes so that you might also celebrate this Canada Day with full, conceding appreciation:

Stereotype#1: Canadian Men Are Sensitive AND Hot. All of them.

I have believed this stereotype since the bipolar-disordered-daddy-issues-suffering-emo-singing Degrassi heartthrob Craig Manning stole my heart at age 13. Craig taught me that Canadian men are dreamy, full of feelings, play the guitar, and prone to very dramatic high school experiences:

All is forgiven, Craig. Even those jeans.

You want to make a Canadian smile? Point it out to them when they say a word differently. It actually barely happens, but they will get so genuinely, secretly pleased that a humble fairy will get its wings. I recommend looking out for the words 'against' and 'zed.' Also, did you know young Canadians say 'hey' more than they say 'eh?' As in, This pizza's pretty good, hey? Not as good as in Vancouver, though.

Stereotype #3: Canadians Love to Give Directions

In my case, these directions usually involve how to properly chop an onion, pronounce the word insidious, or close a water bottle. Apparently, this is a Canadian trait, corroborates my Canadian boyfriend's Canadian friend. Whether it's proper health care systems or ice hockey, if you're here in America, you're probably doing it wrong. In fact, if there's a typo in here, I did it on purpose, just for the Canadian reader's entertainment.

OK, so that's not so much a stereotype as a fun fact I didn't know before. But don't think that makes them more culturally sensitive, as exhibited by this vaguely offensive picture of Alex dressed like a member of the Village People.

Dreamy Canadians, am I right?

Stereotype #5: Canadians LOVE to point out when someone is Canadian.

So much so that there's a hilarious website devoted to it. Did you know that David Rakoff of This American Life was Canadian? He actually exposed the phenomenon of Canadians pointing out their kind in a fantastic radio essay.

To know one is to stereotype one; and that's because they are simply, as I suspected at age 13, the cutest.