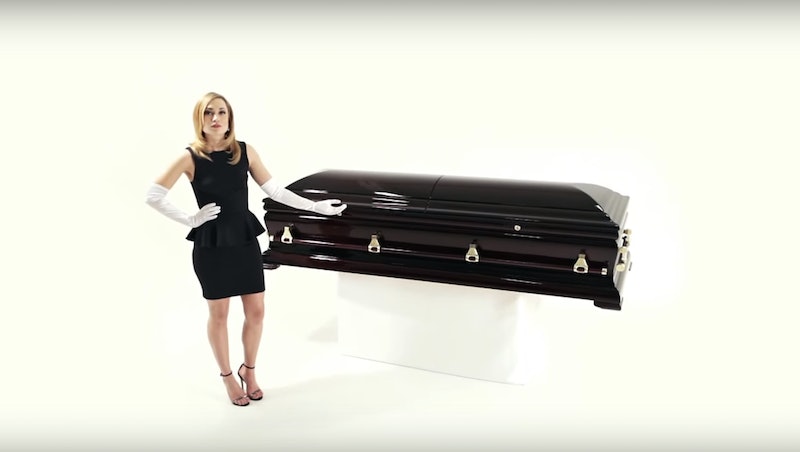 The rise of social media has transformed the daily lives of many in the last decade, but will platforms like Facebook, Twitter, and Instagram transform death as well? If these new “smart coffins” are anything to go by, death itself may be the next social media frontier. Incorporating social media, sound systems, and LED lighting systems and screens, these caskets are probably more tricked out than any of the technology you use in your actual life. But, seriously: Who doesn’t want to be the most technologically savvy corpse in the graveyard?

One of these caskets, dubbed “The Coffin of the Future,” features a large screen on the top that shows a picture of the deceased and messages from loved ones delivered via social media. It also has LED lights running down the sides that change color (The Daily Mail theorizes that this may be so that the lights can “reflect the person inside’s personality.” I imagine that after a couple of days of being dead, most people will be a sort of sickly bluish-greenish color), as well as speakers that can project a song or a eulogy. This smart coffin, designed by UK company Perfect Choice Funerals, is only in the conceptual stage at present.

We recently carried out some research into the rise in the use of technology at UK funerals and thought it would be interesting to see how different elements could be incorporated to modernise funerals.

'Following our previous research, we were surprised by the amount of people posting photos of their funeral attendance on Facebook. Social media has become such a big part of people’s lives, we wanted to combine funerals, technology and social media to produce a proto-type coffin and this is what we came up with.

Another Smart Coffin — and one that’s actually available for purchase — is the CataCombo, produced by Swedish company Pause. The CataCombo comes with a two-way speaker system built into the coffin that syncs to a “CataPlay” app, which connects to your Spotify account. There’s a screen embedded in the headstone (above ground), so that people can see what you’ve got playing inside the coffin, and can even add selections to your list. I’m assuming that there is some way to regulate who gets to add music; otherwise, this device could open the door to evil-doers who want to ruin your afterlife by playing the “Macarena” on endless repeat. At over $30,000, this post-death sound system doesn’t come cheap — but what’s a cool 30 grand when it comes to the best in “life after death entertainment”?

If smart coffins really are going to be a thing, then we shouldn’t stop at sound systems and message sharing; the possibilities really are endless. Here are a few upgrades I’d like to see before I leave this mortal coil:

Check out the CataCombo in all its, er, glory.