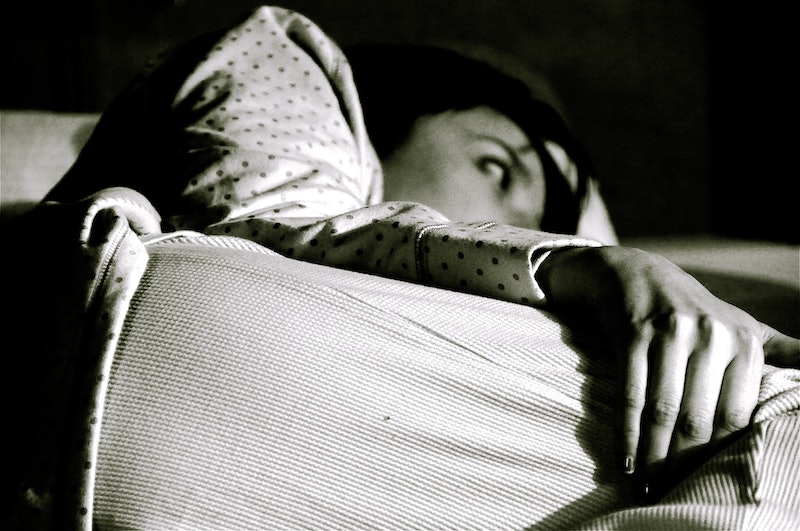 I, for one, am the ultimate brat when I can’t fall asleep. There’s whining, pouting, tossing, turning, grunting... you name it. However, thanks to some habits that affect sleep, when I started freelance writing several months ago, I found that I'd suddenly become even more of an insomniac, and my days felt long and tiresome. There are so many sleepless nights I can think of just off the top of my head, but I never stopped to consider what, exactly, was keeping me up at night. I'm sure if you're anything like me, you find yourself exhausted at certain points throughout the day, but haven't made moves to get yourself into a better sleeping pattern. No matter how long you've been messing up your own sleep schedule, it's better late than never to fix things and finally get your best night's sleep.

Here are eight habits that are proven to keep you up at night. The great news is all of them are completely avoidable. So read through these points and if any of them resonate with you, maybe start making some changes. Soon you'll be sleeping through the night like a baby, and you'll notice your feelings of daytime drowsiness quickly disappearing.

It’s never a good idea to go to sleep on an empty stomach, however on the opposite end, going to bed extremely full is setting yourself up for a rocky night of sleep (if you can even fall asleep!). According to a Business Insider report, our bodies are intended to digest heavy food while positioned upright. Therefore trying to lie down after a giant meal just isn't going to work right. You should ideally give it about three hours before going to sleep.

Think of having a heavy meal before bedtime like having a giant cup of coffee before bedtime. The two ultimately have similar results. You'll be waking up throughout the night and feeling miserable the next day.

2. Consuming Too Much Caffeine

Building on the coffee point above, it’s highly recommended that one should avoid consuming such high levels of caffeine before bedtime, if they wish to get a good night of sleep.

Scientific American reported on a study that showed those who drank caffeine throughout the day were more likely to wake up in the middle of the night.

This applies to other caffeine-containing substances as well, such as chocolate, caffeinated sodas and teas, ice cream, energy drinks and the like. And, regardless of when you’ve consumed these caffeinated products, if there is enough caffeine consumed, it could still be pumping through the body well into the evening.

To avoid having caffeine in your system when your head hits the pillow at night, try not to consume caffeinated products anytime after lunch.

3. Sleeping With The Television On

Or, staring at your computer screen, tablet, or cell phone. These electronics tend to pose a distraction, and before you know what hit you, it’s 3 a.m. and you’re still watching reruns of Friends.

Additionally, the light given off by these devices tricks your brain into thinking it is daytime, making it harder for you to fall asleep. According to a Medical Daily report, viewing these devices that omit artificial light can mess with your sleep cycle. Try to avoid using any kind of electronic 1-2 hours before bedtime.

4. Drinking Too Much Alcohol

Not sure about the rest of you, but there have certainly been times when I’ve turned to a glass of wine as a means of making myself tired. Sometimes it does “knock me out,” but the more I’ve researched this tactic, the more I’ve realized just how flawed it is. A lot of times drinking alcohol will make us feel sleepy, but it doesn’t mean the sleep we’re getting it actually a good one. Research shows consumption before bedtime keeps our bodies unknowingly waking up throughout the night.

According to WebMD, in addition to reductions in rapid eye movement (REM) sleep (REM is when our bodies dream; disruption in REM leads to daytime sleepiness) drinking alcohol before bed can increase sleepwalking and talking in your sleep, as well.

5. Napping During The Day

Sometimes during the day we’re just — how do I put it — really freaking tired. Maybe we’ve been chasing children around all day, or busting our butts at the office, or running what feels like a million errands, so when we take a moment to sit on the couch, we feel the sudden urge to nap.

But, taking lengthy naps actually end up throwing off our whole sleep cycle. If you must nap, keep it short! Those power naps you hear about so often? It’s possible they’re called power naps for a reason. Try a short 15 to 20 minute nap for instant rejuvenation without ruining your regular sleep cycle. You'll feel refreshed and be able to get a full night of sleep that evening.

Your bedroom should be a place that’s completely devoted to peace and relaxation. If you’re someone who can’t function in clutter, how do you expect your body to be able to fully relax in clutter?

No matter how clean (or unclean) of a person you are, having an organized, quiet and mess-free room will help you to drift to sleep more peacefully. Also, try some soothing candles around the your room leading up to bedtime. Later, the combination of cleanliness and aroma will send you into a heavy sleep.

So sorry, Fido, but it’s time for your owner to get some rest without you. I’m obsessed with my dog probably to a fault, so this one is particularly difficult for me, but sadly it’s true. According to the Mayo Clinic, a many people who sleep with their pet find that the animal is disturbing their sleep. Not only will your pet sometimes physically cramp your sleep style in the middle of the night, but they could also flair up unknown allergies. If you can't handle a night away from your pet, try getting them to sleep in their own bed at the opposite end of your room. Then at least you'll be able to look at their adorable face from a safe distance before you drift off.

Ideally, your bed should be used for two things and two things only: sleeping and sex. If you and your significant other regularly get into quarrels while lying in bed, it’s most likely taking some sort of a toll on your sleep. Subconsciously, you’re now associating your bed with a place of argument and distress. You’ll not only have that particular evening’s sleep disrupted, but future sleeps will be affected as well. So keep the serious talks outside of the bedroom if at all possible.

Getting a solid sleep of night seems to be easier said than done. But, by breaking these little habits listed here, we can all collectively be crank-free during the daytime after getting long, deep and relaxing nights of sleep the evening before. And our co-workers, friends, and family members are bound to be happy with this pleasant change in our attitudes.

More like this
The 12 Best Air Fresheners For Bathroom Smells
By Amber Petty
The 10 Best Doormats For Cleaning Shoes
By Ileana Morales Valentine
The Best Time To Date After A Breakup, According To Experts
By Bustle Editors
Your Daily Horoscope For August 9, 2022
By Mecca Woods
Get Even More From Bustle — Sign Up For The Newsletter