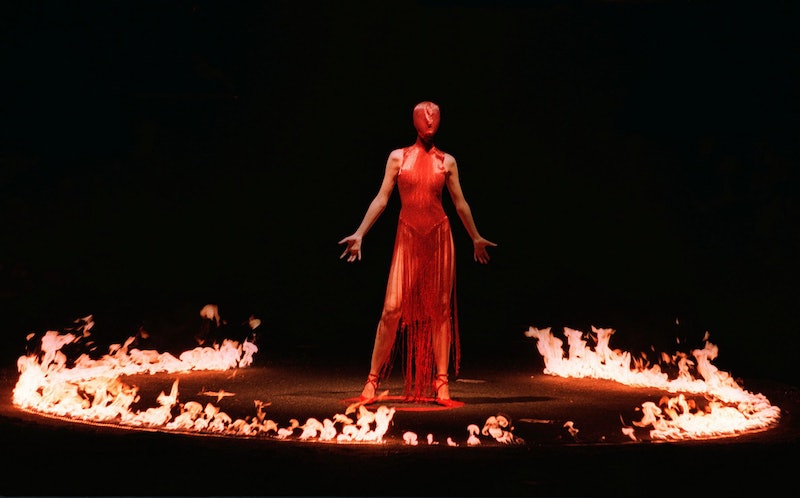 Being a fashion model is not easy. Sure, you get to wear expensive clothes, travel the world, and you never have to do your own hair and makeup, but sometimes you have to do the craziest things, like walking in heels down a floating catwalk in Paris, or rappelling down the side of a skyscraper while giving your best smize. Sounds like a piece of cake, right?

Of course, elaborate, outlandish shows are practically commonplace at Chanel, and Dior and Alexander McQueen are also known to dial it up a notch from time to time. But, it's not always the big couture houses (who not so incidentally have equally big budgets) that pull out all the stops. Some lesser known labels, like Russian designer Jana Nedzvetskaya and J Autumn, who staged the floating Paris show, have proven to be totally fearless when it comes to pushing the envelope and taking their shows beyond the realm of what's expected.

From rings of actual fire to walking the plank Peter Pan style to taking a rather public shower, here are some of the craziest things that models have had to endure on the job.

For Russian designer Jana Nedzvetskaya's Spring/Summer 2015 fashion show, models walked down a runway in ethereal, floaty dresses. Business as usual, right? But instead of pulling a ferocious pose at the end of the runway and expertly turning to walk back, models took the plunge right off the edge of the runway and into the water below, where they pretty much put Project Runway to shame with beautiful poses that really showcased the clothing in the most perfect way.

J Autumn has thrown some pretty great runway shows, from the London Bridge to the riverboat in Paris for her most recent collection. But her Spring 2015 show, which took place last October 4,000 feet above the Colorado River at the Grand Canyon, really takes the prize for the most beautiful setting imaginable. I hope the models weren't afraid of heights — the catwalks floors were totally transparent.

I can only imagine how it went the when show organizers for this called around to some of Boston's modeling agencies to cast for a vertical fashion show at the Revere Hotel — and, better yet, when the models were called in for a casting and asked whether they've ever rock-climbed before. I don't know if I'm more impressed by the fact that the models were able to walk down the side of a building (with the help of some super-sturdy straps) or the fact that none of them threw up on the way down. Similar shows have also gone down (pun intended) in Dubai and at New York's Rockefeller Center.

4. Strutting In The Subway

During Berlin Fashion Week in 2012, models took to the subway to show off fetishized fashion. Aptly named the "Underground Catwalk," the show was not only literally underground, but it also showcased models with tattoos, piercings, and mohawks. Since then, there have been a few other subway fashion shows; it's gone down in Thailand and this past February, designer Kim Mesches staged one in Brooklyn.

5. Strolling Down The Great Wall Of China

Fendi's 2007 fashion show on China's Great Wall was one of then-creative director Karl Lagerfeld's earliest off-piste shows, although he has since done Austria, Dallas, and Dubai, and will bring his fashion circus to Havana, Cuba in May 2016. Fendi's 2007 show reportedly took a year to plan, and cost the Italian label $1 million to produce.

6. Walking A Mile In Heels

This runway show, held on the rainy last day of Fashion Week in Copenhagen in 2012, holds several world records, for physical size (the runway is a mile long!), number of visitors, and number of models. Seriously though, one mile, in heels and couture? I hope the models got plenty of water and snack breaks!

7. Posing In A Ring Of Fire

For McQueen's Fall/Winter 1998 collection, which was based on Joan of Arc, models walked down a runway under low-hanging lamps that were swinging maniacally. The finale, though, was en fuego — literally. It involved a model, clad in a red lace dress-slash-superhero-costume, complete with face covering, standing in a ring of fire. If you watch the runway video, the coolest thing to note is the absence of cell-phones, so the audience is really just taking it all in, save for a few digital cameras.

8. Showering In Front Of An Audience

Two models standed solemnly on raised platforms as other models sauntered by in Chalayans Spring/Summer 2016 collection. They both wore light white jackets that were understated but chic in their own right. At the 2:25 mark, showers above their heads turned on, and the jackets slowly dissolved, revealing tres stylish dresses underneath. Bonus points for the maintaining the straightest of faces throughout the shower.