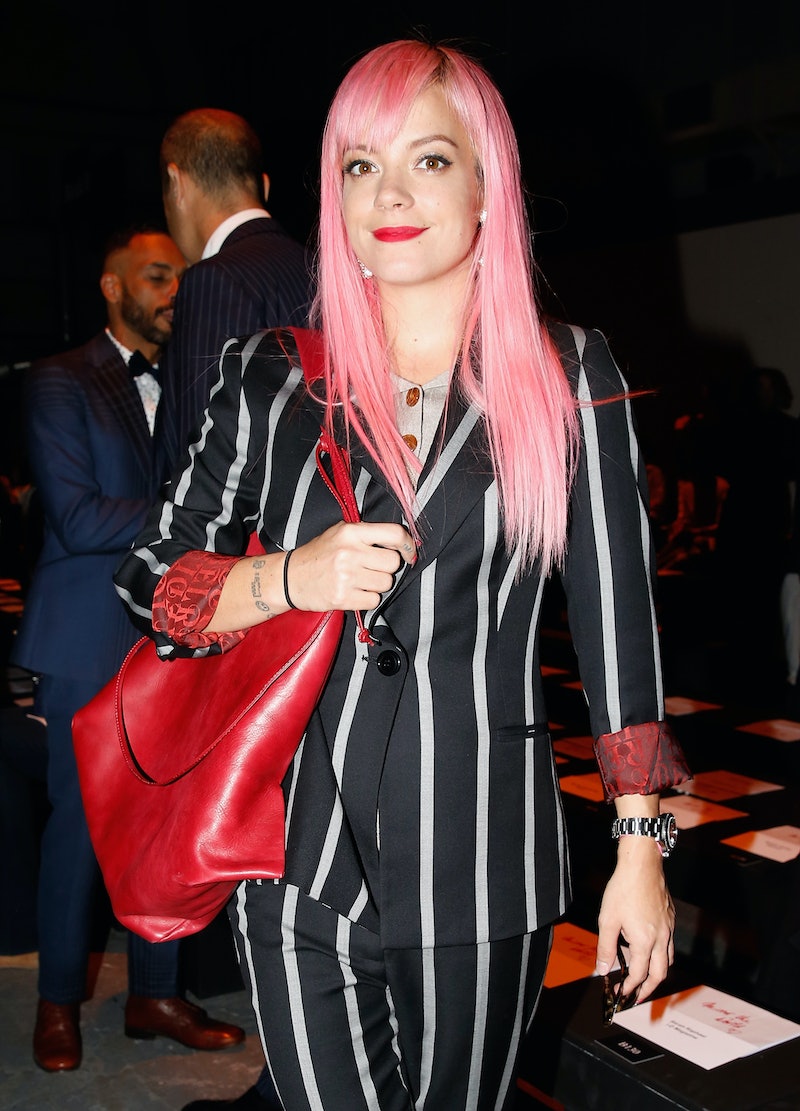 It isn't an easy subject to talk about, but almost exactly five years after losing her son, Lily Allen has shared a song about her stillbirth experience. Taking to Twitter on Wednesday, Allen wrote that her latest song, "Something's Not Right" (from the soundtrack to the movie Pan), was actually written as a tribute to the baby she delivered when she was six months pregnant, knowing that he wouldn't make it. Although Allen normally doesn't share much about her private life, opening up about her heartbreaking experience has helped to shine a light on the reality of stillbirth and pregnancy loss — something that is very common yet rarely talked about.

Allen announced her pregnancy in 2010, but contracted a viral infection and lost the baby at six months along. She has since gone on to have two daughters — Ethel, 3, and Marnie, 2 — with husband Sam Cooper, but shared with her 4.3 million Twitter followers that she was admitted to hospital five years ago, and then gave birth four days later. In a series of tweets discussing the song, Allen also linked to a YouTube video where the song could be heard in its entirety, and then asked her fans to donate to Sands, a U.K. charity supporting those affected by stillbirth or neonatal death, if they wanted to help.

According to the CDC, approximately 24,000 babies are stillborn in the United States each year. Stillbirth affects about 1 percent of all pregnancies, and can happen at any point after 20 weeks gestation. Sometimes, as with Allen's infection, a reason for the stillbirth can be identified, but often stillbirth is unexplained, which can make the grieving process that much more difficult. Certain factors do increase a woman's likelihood for stillbirth though, including obesity, being 40 or older, having a medical condition like diabetes or high blood pressure, smoking, using drugs or drinking while pregnant, or having a past history of stillbirth, premature birth, or neonatal death. But having a stillbirth doesn't automatically mean your dreams of having kids are ruined forever: Just as Allen has since gone on to have two healthy daughters, women have a less than 1 percent chance of having another stillbirth after they've already experienced a loss.

Despite campaigns working to raise awareness about pregnancy loss, talking openly about stillbirth and miscarriage can be incredibly difficult, and can start to seem like something that shouldn't be discussed. But those touched by pregnancy loss need to be able to deal with their grief, and talking about and remembering the lost baby can be an important part of that process — even if the baby never lived outside the womb.

Pregnancy loss isn't something that anyone deserves to go through, and the pain can be crippling. But by sharing her story, Lily Allen has helped shine a light on the reality that stillbirth does happen, and more importantly, that no one should have to feel ashamed to talk about their own pain.