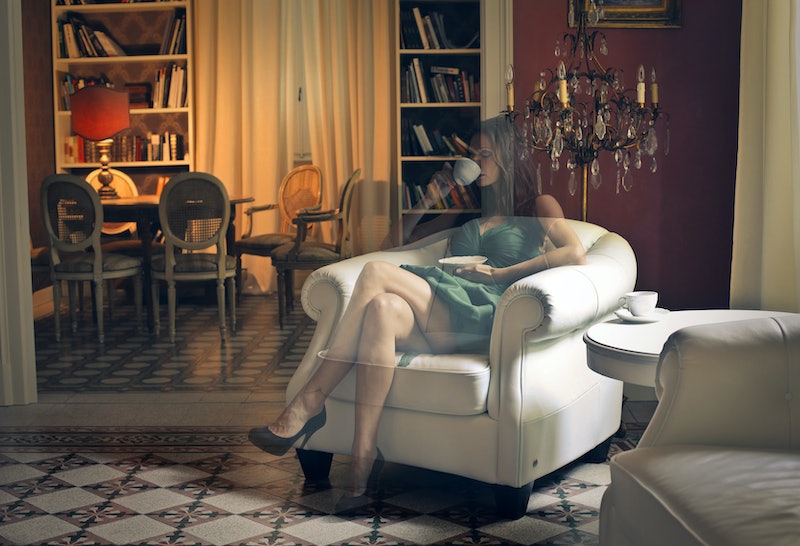 Halloween is a creepy time, but apparently there's plenty of spooky action going on year-round because apparently staggering 18 percent of Americans claims to have seen a ghost. Even more than that, a full 42 percent, of Americans agree that they "believe in ghosts" (topped by 52 percent of people in the U.K., though). If almost one in five Americans had claimed to see, for instance, a pink duck then I'd be tempted to believe them — perhaps it was some weird fluke of a genetic mutation, or someone cruel with too much time on their hands took some spray paint to it. But in the case of ghosts, real evidence is scantier. So what's going on?

Ghosts are a pretty cross-cultural phenomenon, and it'd be a little too blithe to dismiss them entirely as flights of fancy. Nonetheless, there are readily-available and simpler explanations for what's happening when people have the ghostly experiences that they do. Sometimes people are just pulling simple pranks on one another, or one person doing something innocently weird ends up getting misinterpreted by another (children moving things inexplicably around the house or making odd noises in the night).

Environmental factors, like dense air and hazy light, can go a long ways toward creating the impression of a ghost especially to a viewer who's tired or under the influence — it's no coincidence that the stereotypical ghost looks like a blob of light or basically human. And happenings like sleep paralysis, "waking dreams," and straight-up hallucination are well within the realm of human experiences and happen totally apart from whether ghosts exist in the world or not. There are cases of haunted houses turning out to be carbon monoxide-laden houses. Scary, but not quite in the same way.

Even so, there's nothing too generally wrong with the role ghosts, spirits, and other minor allegedly supernatural entities play in our lives. As the huge ghost tourism industry goes to show, ghosts capture the imaginations of many sane and ordinary people, and help them to think through the origins and history of a place in more detail. Interestingly enough, people who don't attend religious services regularly are about twice as likely as those who do attend regularly to report having seen a ghost. This suggests that ghosts might be a sort of outlet for the supernatural impulses that seem common in our species.

On the other hand, I was heartened to see that about 62 percent of American home buyers would consider purchasing a "haunted house," probably hoping that their level-headedness would help them to get a better deal. A New York appellate court was once not quite so sane, allowing a spooked buyer to back out of the purchase of a haunted house because he wasn't properly warned by the seller as to its purported hauntedness. In my opinion, though, it makes little sense to let ghosts have a say in your earthly life. There are more than enough things to worry about already.