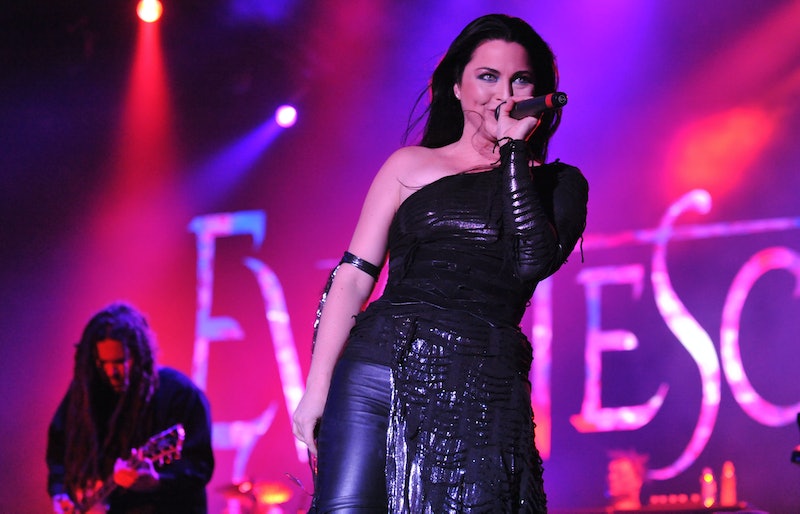 In an effort to make all your early '00s dreams come true, Evanescence is reuniting again... sort of. Before you start scouring the Internet for news about a potential new album from the group, though, you should know the band is not planning a full-blown comeback — but, they are planning a brief tour, so there's still something to look forward to. Singer Amy Lee told Rolling Stone that they would be performing at Ozzfest in Toyko, Japan in addition to three tour dates in Nashville, Dallas, and LA, beginning in mid-November. For those who thought they had disbanded in 2005, the band finished up a world tour in 2012 and went on hiatus after that, so this isn't the first time they've gotten back together for a mini-reunion. (The band does not plan on releasing new music, Lee recently released a cover of Portishead's "It's a Fire" on her Twitter.) Luckily, for fans of the band, Lee says that more touring might be in their future.

For many, Evanescence is the sound of high school or middle school; the goth stylings were the perfect to accompany angst back in the day. Now, they're the perfect accompaniment to nostalgia back to a time of first crushes, mini-rebellions, and just hating homework.

If you can't make any of the tour dates — the specifics are available here — I still recommend going back for a listen to the classics. See if these Evanescence songs with some selected lyrics don't bring you back to a time that was before Facebook and a lot... angstier.

Bring Me To Life

This duet is literally what the early aughts sounded like. It was this, and like, episodes of TRL.

SO many feelings. Such a sad song.

This one expressed a certain kind of girl power that was really relatable and empowering.

Call Me When You're Sober

This one was a little later for the band and a little more mature, but still defining.

They sang "never sleep, never die," and everyone was like yeah, death to curfews and bed times! The Latin in this one is a great touch.

From the moody string intro to the angsty mythical lyrics, this is a classic.