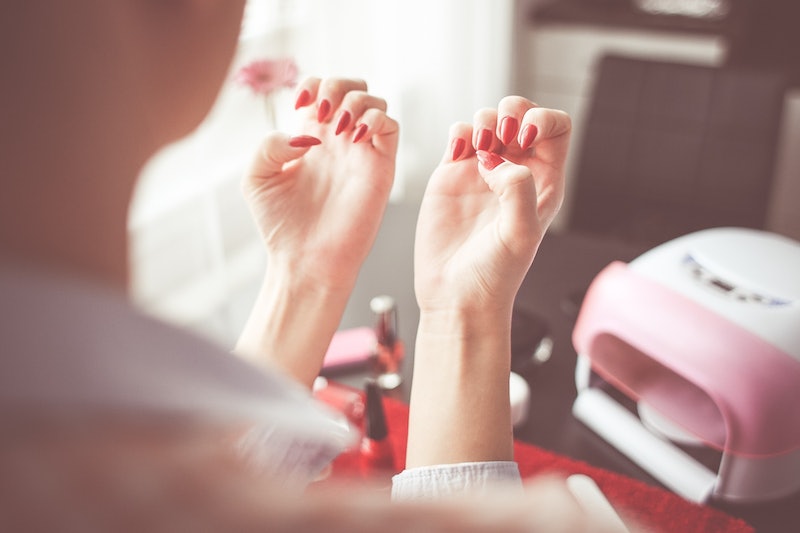 I have a love/hate relationship with gel manicures. On one hand, they last way longer (and often look better) than regular manicures. On the other hand, I'm always worried about what the longterm effects on my nails will be. I'm sure I'm not the only one who is wondering if gel polish makes your nails stronger or if they are doing some serious damage instead.

When I get a gel manicure, my nails feel insanely strong and durable, and they even seem to grow faster than normal. I wondered if there was some way my nails were actually becoming stronger with each gel manicure. Well, it turns out the news isn't great, because according to multiple sources (and experts), gel nail polish doesn't make your nails stronger. In fact, it kind of does the opposite.

Dr. Chris Adigun, a dermatologist who focuses on nails, told Teen Vogue gel nail polish is worse than you think. "The manicure process can lead to dehydration and thinning of the nail plate," she said.

In a news release from the American Academy of Dermatology, Dr. Adigun (who's apparently a go-to source for nail-related questions), said the long amount of time the nail polish stays on can actually be harmful. "In general, any manicure left in place for an extended period of time is not a good idea because you are not seeing what is going on underneath the nail polish," she said in the release.

So what's a girl who loves gel manicures to do in this situation? Make absolutely certain that you're following proper removal techniques. Acetone, which is used to remove gel polish, isn't great for your nails, but it's way better than peeling off the polish and wrecking your nails in the process.

If you're a gel mani fanatic, you're probably exposing your nails to more UV light than you think, which is what salons use to "cure" the polish. Make sure you put sunscreen on your hands before you stick them under the lights, even if it's just for a few minutes.

Gel manicures can become an obsession, and there's no doubt they make your nails look great. But save them for an occasional treat instead of a routine treatment if you're concerned about the well-being of your nails and hands.