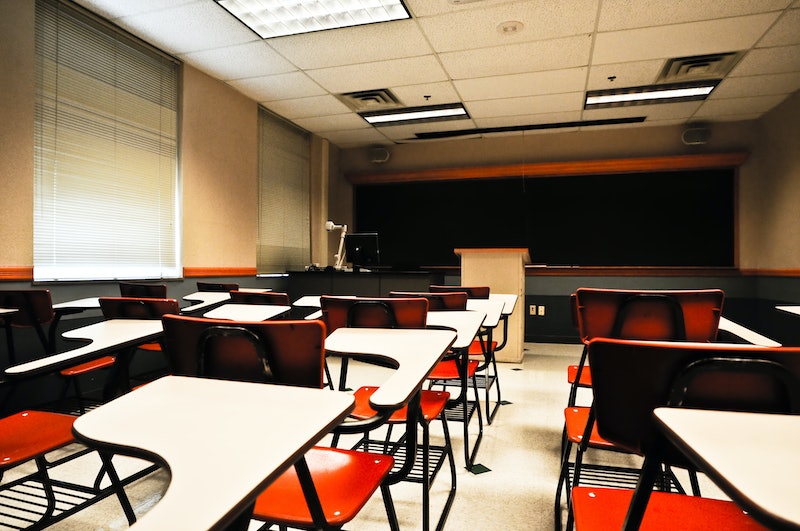 The shortcomings of sex ed largely remain something of a comedic trope in popular culture (who could ever forget Coach Carr's bizarre health class in Mean Girls?). However, it's time for us to recognize that accurate sexual education is a weighty national and global issue. Sexual health education can affect public health and societal attitudes on everything from consensual pre-marital sex to transgender rights, which is why it's important for us to help improve sexual health education in both the United States and abroad.

Sexual health education can have huge implications on a young person's future, their ability to make their own decisions, and their self-image and perceptions of others. According to the American Public Health Association, comprehensive sex education could reduce the fatal spread of HIV and other STIs, decrease the number of unexpected pregnancies, and reduce people's vulnerability to sexual violence and abuse.

Failure to provide youths with comprehensive sex education results in predictably adverse effects. A University of Washington study found that teenagers who received sex education were 60 percent less likely to report pregnancy. The Center for Disease Control attributed these lower rates to pregnancy and STI prevention efforts. In 2012, states like Mississippi and New Mexico, where sex ed was optional and abstinence-only education was the standard, had the highest rates of teen pregnancy, while New Hampshire, which required sex ed include information about contraception, had one of the lowest rates of teen pregnancy.

Sex ed should be safe, open, and inclusive for all teens. With marriage equality and transgender rights increasingly becoming a point of contention in American politics, teaching about the gender spectrum serves to promote both empathy and cultural literacy. Simultaneously, young people should also learn how to protect themselves from sexual harassment and abuse, especially with LGBTQ youths among the most vulnerable demographic to sexual assault and harassment, according to the American Association of University Women.

If you're interested in helping to promote fair sexual health education for youths, consider contributing to these national and global organizations and campaigns.

We're challenging society's screwed up approach to sexual health and reproductive rights. Rather, we envision a society in which all young people are valued, respected, and treated with dignity. We want sexuality to be accepted as a healthy part of being human and youth sexual development to be recognized as normal. Only in such a world can all youth and young adults be celebrated for who they are and be provided with the economic, educational and social opportunities to reach their full potential.

You can support Advocates for Youth by donating online through its website, selling products via the eBay Giving Works program, or even setting up a wedding registry with the I Do Foundation. According to its website, the organization is also looking for volunteers. You can contact Advocates' Director of Development Jennifer Stark at (202) 419-3420 Ext. 24, or follow its blog posts, tweets, and Facebook posts to learn about volunteering opportunities.

The GSA Network unites school clubs and affiliations across the country by fighting for LGBTQ, racial, and gender justice in education. GSA advocates for policies that protect LGBTQ youth from harassment and violence, as well as sexual health education that reaches across identity lines and is inclusive of youths of all gender orientations and identities. A representative from GSA Network's L.A. location tells Bustle that high school GSA clubs strive to provide safe, sexuality-positive environments which are especially helpful in school districts where identity and orientation aren't emphasized in sex ed.

Youth leaders involved in GSA Network's programs learn how to advocate for policy change and have gone to Sacramento to talk to policymakers on this relevance and necessity of comprehensive sex ed. Comprehensive sex ed that includes culturally relevant and LGBTQ-inclusive information is one important piece of fighting for safer schools and schools where students are actually educated to lead healthy and successful lives.

The United Nations Population Fund (UNFPA) and Global Citizen launched the global #ShowYourSelfie campaign in an effort to "make sure that every young person has the right to determine their own future." The campaign calls for youths around the world to have protection from violence, quality healthcare (including access to contraception), employment skills and opportunities, education, decision making, and, of course, "comprehensive sexuality education," according to the campaign website. #ShowYourSelfie emphasizes how sexual health education is "the key to containing the rapid spread of HIV/AIDS and other STIs" and actually results in students having "fewer sexual partners, later sexual debuts, and increased contraceptive use."

The campaign encourages millennials to support it in a creative way: by submitting selfies and personal stories as a "visual petition" to push world leaders to "invest in young people."

Getting involved is super easy. Share your selfie on social media under the hashtag #ShowYourSelfie and download your own campaign in a box to spread the message in your town.

The Native Youth Sexual Health Center is a Canada-based organization that advocates for sexual and reproductive health, rights, and justice for indigenous teens throughout the United States and Canada. According to its website, the organization primarily strives to promote "culturally safe sex education," violence prevention, pregnancy options, LGBTQ advocacy and awareness, STI awareness, child welfare, general youth human rights, and the reclaiming of traditional rites, ceremonies, and knowledge.

You can support the Native Youth Sexual Health Center by donating money through its website.

Sexual Health Promotion Through Youth Leadership, a program operated by Action for a Better Community in Rochester, New York, works to change the community by "promoting optimal sexual health for teens and young adults." Other than its advocacy for accurate, comprehensive sexual health education for young people and work with youths at risk for HIV, STIs, or unintended pregnancy, an SHPYL representative tells Bustle that the program also maintains a youth LGBTQ support/social group that meets once a week.

SHPYL also tells Bustle the program combats high local rates of STIs and leads local community events to raise awareness about sexual health, such as for World Aids Day. Five years ago, SHPYL worked with students who successfully petitioned for access to contraceptives through their schools. SHPYL says the lack of funding is a major problem since STI and pregnancy prevention programs tend to face opposition in society.

You can help SHPYL by making donations on the Action for a Better Community website and indicating its Youth Services programs.

Scarleteen is an online resource that answers private questions about youth sexuality and offers blogs that address sexual health and gender identity for teens. It publishes first-person stories from users and provides a safe, inclusive message board for people to ask questions and support each other. Scarleteen addresses body issues, relationships, consent, and sexual abuse and assault. The site also provides information for young people about political issues and current events concerning sexual health.

According to its website, Scarleteen uses funding to maintain its mobile site, an "abortion and unplanned pregnancy fund," print materials for distribution at clinics and schools, community outreach, and work with activists and educators for sexual health education.

You can support Scarleteen with donations through its website.

We can hardly expect change in national and international sex ed policies to happen over night. But we can support organizations that advocate for improved sexual health education and provide youths in the United States and countries around the world with information and resources. With our support, these organizations could impact both cultural attitudes and the state of public health in society for generations to come.