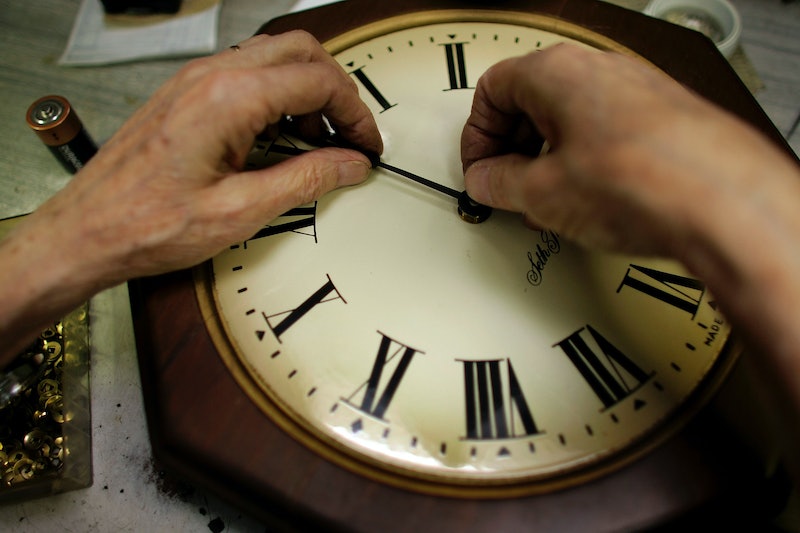 Early Sunday morning, the country practiced half of the old adage "Spring forward, Fall back" in honor of Daylight Saving Time. You won't hear too much grumbling this time of year about the time change because the jump for the winter season tends to work in peoples' favor. The falling back is better than the springing forward — most people got an extra hour of sleep, and college students got an extra hour to stay up partying on Halloween night. And changing your clocks doesn't suck as much as it used to either because most of them are automatic now. So DST isn't quite as bad as it used to be.

But lack of inconvenience isn't exactly a good enough reason to keep Daylight Savings Time around, and it seems like there are several pretty good reasons to keep the clocks from changing. Only four months out of the year are "standard" time now (which defeats the purpose of calling it standard), and there's strong advocation for a year-round Daylight Saving Time instead of the seasonal system that's used now. Bottom line, Daylight Savings doesn't make much sense anymore — here's six reasons why the United States should get rid of it.

1) The Rationale Behind DST Is Irrelevant Now

Daylight Saving was introduced by Germany in World War I to save electricity costs, and the United States adopted it in 1918. The thinking was that if people are coordinating the time with the sun, they will have natural daylight when they are awake and not use electricity. That was pretty smart 100 years ago, but it doesn't make as much sense now. People are going to stay awake with or without the sun, so the time might as well just stay consistent.

2) It Actually Increase Electricity Use

Indiana didn't adopt Daylight Savings until 2006, so researchers got a good chance to see whether it actually helped the state save on energy costs. Turns out it led to a 1 percent overall increase in consumer electric use, so the whole theory about saving fuel is definitely debunked.

Everyone loves gaining an hour in November, but having that time snatched away in March can feel like torture. But the lost sleep is more serious than most people realize — according to Time, there's an increased risk for heart attacks, which comes just from having your sleeping schedule abruptly changed. Additionally, a couple hundred car-related deaths per year are attributed to Daylight Saving Time. It's not just inconvenient, it's downright dangerous.

4) It's Not Universal, Which Is Super Confusing

Arizona, Hawaii, Puerto Rico, and a few other U.S. territories don't use Daylight Saving Time, and let me tell you, it's very confusing to go there and try to figure out what time it is. Even more mind-boggling, the Navajo Nation in Arizona does use DST, so within the state, there's 2 different time zones. It's not fair to try and trip me up like that.

5) It Gets Dark Way Too Early

When the clocks fall back, the evenings start earlier and it sucks. In New York City, it's solidly dark by 5:30 p.m., which is just sad. Sunshine is hard enough to come by in the winter months, and if it's already dark by the time you're leaving work, you're actually more likely to get Seasonal Affective Disorder because of serotonin deficiency. If the evenings were longer, people could avoid that shock to their hormones that can trigger seasonal depression.

6) It's Really Just A Joke At This Point

People don't get why Daylight Savings is a thing, so everyone just treats it like a joke. It's an excuse to stay up a little later and tweet the time-traveling joke you've been saving all year, but no one takes DST seriously.