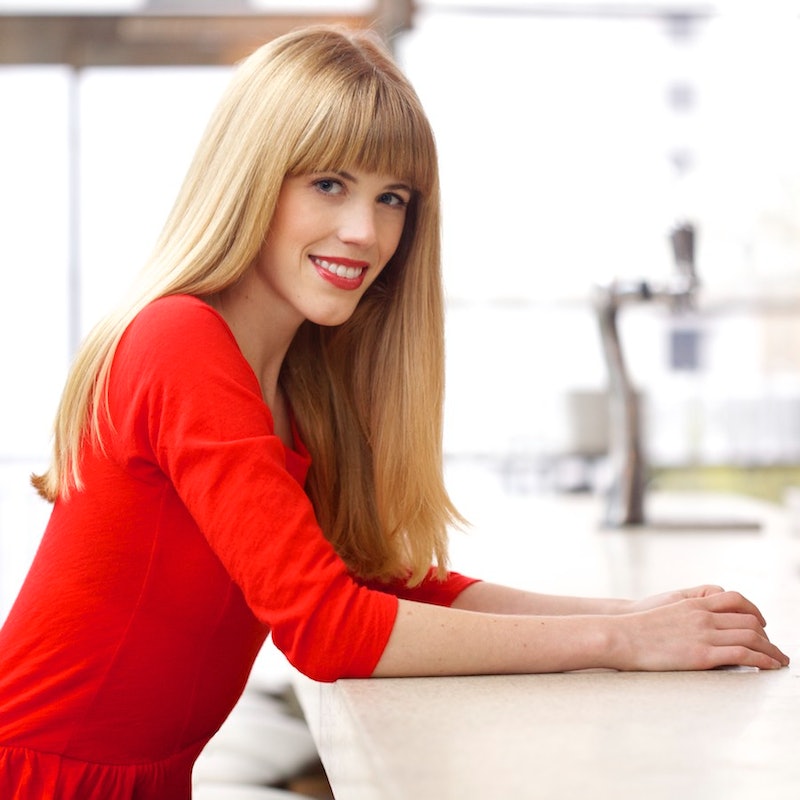 Promotional material for Kathleen Hale's debut novel No One Else Can Have You (HarperTeen) compares the title to the cult-classic Coen Brothers' movie Fargo, and while it's clear why — they're both murder mysteries set in tiny Canadian-border towns, don'tcha know? — it's a derivative comparison. Hale's quirky, darkly funny novel is no copycat.

Hale's story is set in Friendship, Wisc.: Population 689 — or 688, now, as 16-year-old Kippy Bushman's best friend Ruth was just found brutally murdered in the cornfields behind Kippy's house. And as Kippy comes to the slow realization that not only do they have the wrong suspect in custody but the police and townspeople are keen on turning a blind eye to that fact, she invokes her idol Diane Sawyer and starts investigating Ruth's murder herself, getting in trouble with the law, her father Dom, the girls at school, and a mental institution psychologist along the way.

Teamed up with Kippy is Davey, Ruth's older brother who the townspeople believe suffers from PTSD from his recent stint in Afghanistan, home because of an injury to his finger. It's complicated by the fact that after being given Ruth's diary, Kippy realizes that Ruth was often annoyed with her, and may not be the friend she thought she was after all.

If brutal murder and PTSD make you think "sad, depressing book," Hale will prove you wrong. Her sometimes grotesquely humorous novel speaks to the darker truths around death, grieving, and mental illness, but by avoiding cliches, she gets to the heart of the feelings, which can often be laugh-out-loud funny. Hale's protagonist Kippy can seem like the embodiment of the nervous giggle compulsion people have at funerals. In fact, at Ruth's funeral, she botches her eulogy, and then tries to start a slow clap when Davey yells at the attendees about catching his sister's killer during his talk.

Kippy is awkward in an honest, real way; not awkward in an adorable dorky, Manic Pixie Dream Girl way like male writers tend to write awkward women. Her mother passed away tragically, and Kippy spent time in a violent tendencies support group for biting in the aftermath. She says:

I always knew exactly what she meant — how sometimes there's this slamming need for proximity, and you want to show someone the full weight of your attention by laying it on them, head to toe. After Mom died, I'd lie in wait and then pounce on Dom yelling 'banzai!' while I got a foothold on his neck or shoulder blade. I'd wrestle Ruth's dogs until they yelped, or squeeze Mother Peanut Butter so hard she could barely hiss. This thought would pulse through my brain: 'I have so much love to give and nowhere to put it!' and then Dom would have to pry Mother Peanut Butter from my fingers.

She thoughtfully uses this experience to question why Ruth's boyfriend Colt could possibly be the murderer: "But also, if you really like someone, and want to lay it on them, well, you could turn into a monster, probably."

Kippy is consumed by this small town of Friendship, where everyone is in each others' business, but impossibly polite about it. The police have yet to encounter a murder, let alone one as brutal as Ruth's. Sherrif Bob Staake — whose squad patrols in police cars with smiley faces on the side, though his has a smiley face with sunglasses to distinguish him — explained in an interview with the newspaper the morning after finding Ruth's body in the cornfield:

Suffice it to say that a lot of the guys cried ... I told them to stop the waterworks, but with something that gruesome, it's to be expected. That's what happens when you spend most of your time cleaning up after pranksters and luring lost pets into your squad cars with ham. Small towns make you soft.

Friendship, as a town, plays a major role in Hale's novel, counteracting Kippy in her efforts to see past the politeness and the desire to have this crime solved to seek truth. The town becomes consumed with the Ruth Fried Foundation Brigade, a group started by Libby Quinn, Ruth and Kippy's classmate, whom Hale has admitted is based partly on Jessica Simpson on Newlyweds. Libby begins the fund as a way to look good on her college applications — even proudly stating that to Davey — but soon, everyone is wearing bedazzled black armbands ("coordinated grief gear") to commemorate Ruth, protesting outside the police station where a suspect is held (the police even allow protesters in to yell at him in the jail cell), and shaming anyone who doesn't join, which seems to just be Davey and Kippy. Kippy confronts Libby at Davey's house, trying to get him to sign a petition of support for the group, but Davey is dumping beer cans and trash at Libby to get her to leave.

There's a sour taste in my mouth. It's so weird how people who've never lost somebody think they deserve a medal or something for bothering people who have.

Then later, "I want to throw garbage at well-wishers, too, and it'd be nice to talk about that with someone who gets it."

Through the humor in the scene, Hale is able to touch on something authentic about grieving and the selfishness of outsiders mourning. It's something that echoes throughout No One Else Can Have You.

I've never really understood the whole candlelit-vigil thing ... from what I gather it's usually just a bunch of girls crying with all their might on purpose. The whole idea of people, like, weeping while holding fire seems irresponsible to me. Whenever I imagine vigils, I think of a hundred ponytails bursting into flames.

Friendship turns so against Kippy that her father in a moment of distress, sends her to a mental institution. The interlude isn't as interesting because, in this case, mental-institution crazy just isn't as compelling as the everyday kooky pecadillios of Friendship's townspeople that ring true, if heightened for story sake. It does, however, set up the question: "Who are the crazy ones?" The ones who have been called crazy by their peers or the peers who deem people crazy?

OK, yes, I did have a sense of the murderer from early on in the story, and it did detract from my enjoyment on the novel, but only a touch. It's a mystery story flaw to introduce a character and then give him or her nothing to do for most of the book — a tell-tale sign of guilt.

However, Hale's poignancy, even paradoxically through humor, lifts No One Else Can Have You from the basic murder mystery, and ultimately, it doesn't really matter who the killer is. The delight of the novel is finding truths about grieving and its reverberations through everyone affected. And with that in mind, plus the depth and authenticity of her main character, Hale's novel kills it.