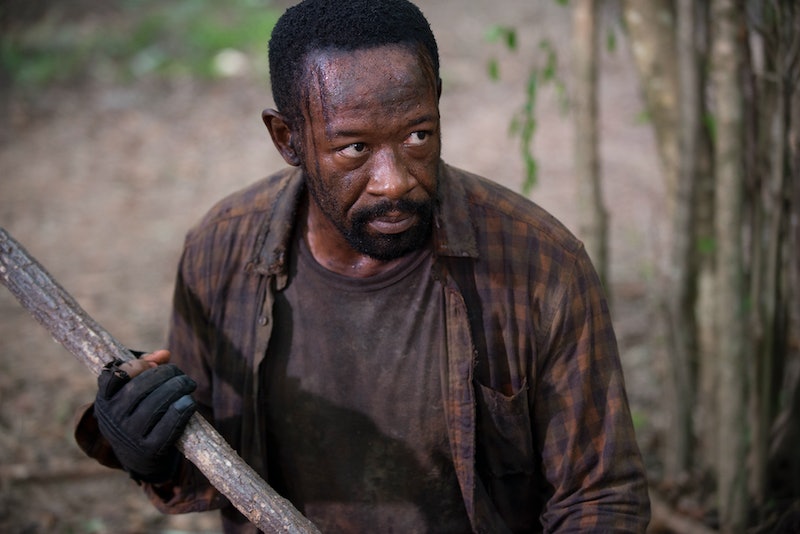 We knew that Morgan's flashback episode of The Walking Dead on Sunday would have consequences, and boy was it a doozy. While most of the episode took place during the timeline of Season 4, the present-day ending revealed that Morgan locked up the lead Wolf on The Walking Dead and is keeping him in an Alexandria basement. He told the Wolf his story about Eastman and the art of Aikido, but unsurprisingly, the Wolf was not having it. He may have been injured, but he vowed to kill everyone in Alexandria before he goes. While I respect Morgan's new perspective on life that seems to be holding him together, this dude is clearly dangerous, and Morgan's decision to hold him captive will almost definitely backfire.

According to actor Lennie James during Talking Dead, Morgan's decision to tell this story to the Wolf was his way of paying his way of life forward. What, is he the Dread Pirate Roberts from The Princess Bride right now? I'm fascinated by the idea of Morgan trying to redeem this Wolf, but I have very low hopes that it's all going to work out in his favor.

One nice thing in the episode "Here's Not Here" is that it showed us several "straggler survivors." Groups of one or two who were on their own, rather than running with a potentially evil clique. I appreciated that nice little bit of world building for the Walking Dead universe. Not everybody is in Terminus, Alexandria, or running with the Wolves. One of the quieter themes this season has been the diversity of experiences in the apocalypse. We've seen several types of organizations on the show, but this season is really showcasing how different survivors' experiences have been. It proves, as Morgan told his pal Eastman, that the world is in fact not over.

Here's the real question — did Morgan really lock the door? It appeared that he did this time. However, his buddy from the episode, Eastman (may he Rest In Peace), kept both Morgan and Tabitha The Goat in unlocked pens. If this show is following the Rule of Threes, I'd bet that Morgan will at some point leave the Wolf unbarred.