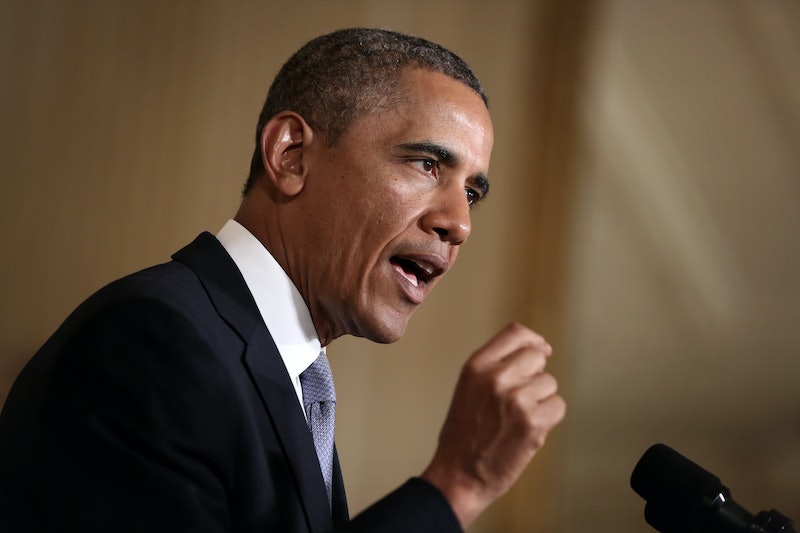 Shall we consider it a belated holiday gift? On the 50th anniversary of President Lyndon Johnson's launch of the "War on Poverty," President Obama has pledged to target income inequality in five American communities: Philadelphia; the Choctaw nation of Oklahoma; southeastern Kentucky; Los Angeles; and San Antonio.

The five areas are the first to be targeted, and the White House will later zone in on designated "Promise Zones." The plan, outlined in Obama's 2012's "State of the Union" address, will combine a number of government programs, including tax breaks, funding local programs for education and housing. The programs are part of the administration's "Promise Neighborhoods" and "Choice Neighborhoods" initiatives, as well as encouraging partnerships between local businesses and the community.

"Promise Zones are a new way of doing business," said one administration official, who requested anonymity ahead of the official White House announcement Wednesday afternoon. "They will be led by local community leadership, working toward a common goal ... supported by the federal government."

Obama's promise comes alongside a survey published Tuesday by the left-wing Center for American Progress, which asked Americans about their attitude to poverty and government involvement. The results? A vast majority — 86 percent — of respondents said that the government should help with poverty. Most of those people cited the root cause of poverty as persistent economic trouble, not personal or governmental failure.

But it may be that Americans are misinformed about poverty. The average respondent of the survey guessed that the poverty-stricken population was 39 percent — but it's actually less than half that, at 15 percent. And although the majority of those surveyed felt negative connotations with the "War on Poverty" as a term, many shifted their position after its programs, laid out by President Johnson, were fully explained to them.

The program's announcement comes before the Jan. 28 State of the Union address, in what is being deemed be a "populist push" from the White House to connect with voters. While income inequality is the one of the Democrat Party's crowning themes of this year, it's also a theme met by approval for the majority of Americans, as the CAP survey hints.

When it comes to equality of opportunity, a majority of Americans don’t believe that poor Americans face a level playing field. And when forced to choose between core arguments about the roots of American poverty—that it stems from a flawed economic system, or from personal failings—nearly two-thirds agreed with the structural argument.

But the CAP findings also strike a blow to Republican opposition to safety-net programs, with two-thirds of white conservatives and libertarians agreeing that most people in poverty are, actually, doing their best to get by. (That Mitt Romney "47 percent" video excluded.)

There's a catch: most poverty-stricken Americans do abuse the system, according to most conservative respondents. However, 80 percent of people believe that programs such as financial aid for childcare, increasing the minimum wage; universal pre-k; and more publicly funded scholarships are worth it.

At the heart of opposition to safety net programs is the idea that poor Americans are undeserving of assistance, and that they are poor because they are lazy. It turns out that very few Americans polled by CAP support this core principle. Nearly 80 percent agreed that “most people living in poverty are decent people who are working hard to make ends meet in a difficult economy,” including 66 percent of white conservatives and libertarians.

More like this
What The UK Blocking Scotland’s Gender Recognition Bill Means
By Sam Ramsden
These Artists Are Reimagining Black History Month To Create A Better Future
By Katie Mitchell
8 Charities To Donate To During Black History Month
By Alexis Morillo
24 History-Making Black Women You Probably Didn't Learn About In School
By Ayana Lage and JR Thorpe
Get Even More From Bustle — Sign Up For The Newsletter
From hair trends to relationship advice, our daily newsletter has everything you need to sound like a person who’s on TikTok, even if you aren’t.