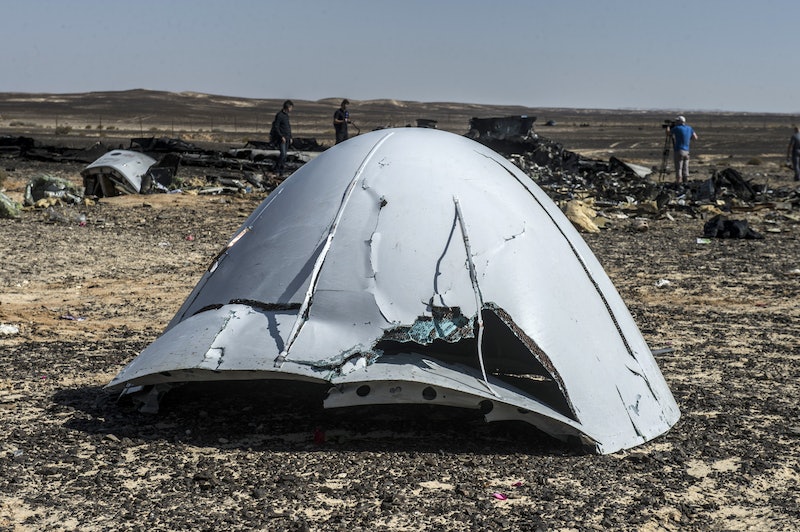 In response to the Flight 9268 crash, a spokeswoman for the airline said Saturday that there are no grounds to blame human error in the Metrojet crash. Oksana Golovina of TH&C holding, Metrojet's corporate parent, gave a press conference detailing the airline's attempts to reach the plane after it first lost contact. She said the flight met with "all criteria required for flying"; meanwhile, the airline's other Airbus A321s — the model involved in Saturday's crash — have been grounded pending further investigation into the cause of the accident.

On Monday, top Metrojet official Alexander Smirnov agreed: The crash, he said, "could only have been a mechanical impact on the plane" — in other words, he claimed, it wasn't the fault of the airline or the airplane manufacturer.

The press conference was followed by a statement released on the airline's website Sunday that reiterated that its planes were serviced in a timely manner and tested before takeoff. The statement also said the airline could not doubt the professionalism of the pilots and crew. This followed a statement released Saturday that expressed condolences for the lives lost and detailed how the plane was serviced in 2014. Golovina said that Metrojet's flight schedule would not be affected by the grounding of its other A321s and it was in contact with Russia's transport regulatory agency.

Flight 9268 crashed Saturday about 20 minutes into the flight after having climbed 33,000 feet. It was en route to St. Petersburg from the Egyptian resort town of Sharm el-Sheikh on the Sinai Peninsula. All 224 people on board were killed.

The New York Times reported that officials suspect the plane came apart in midair but have yet to single out a cause. Terrorism, mechanical failure and pilot error all remain possibilities. Russian President Vladimir Putin has said Russian investigators and scientists will take a large role in the investigation. Police in Moscow have searched the offices of Kogalymavia, Metrojet's legal name.

Airbus also released a statement on Saturday. The aircraft, an Airbus A321-200 was manufactured in 1997 and had been operated by Metrojet since 2012. It had flown an estimated 21,000 flights. The A320 family of passenger jets is one of the largest in the world, around 6,500 in total.

No other statements have been made by officials from the airline or its corporate parents. The wife of the co-pilot spoke to Russian TV on Saturday. She said her husband had talked to one of the couple's daughters before leaving Egypt and had complained about the plane's condition, saying it "left much to be desired."

Both flight data recorders or black boxes have been recovered and more questions should be answered by investigators shortly.