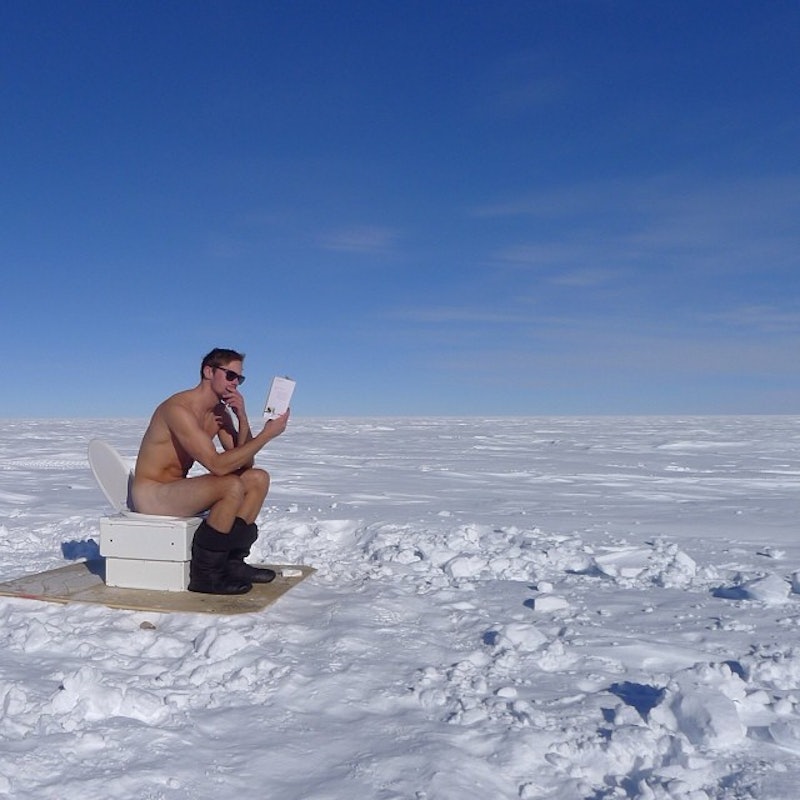 Look, you and I both know that you just clicked on this article right now to see Alexander Skarsgard in all of his tall, buff, godly Swedish glory, so I won't take up too much of your time. In fact, you're probably not even looking at what I'm saying now — you're probably just staring at the picture right above this text, sighing to yourself and preparing to open YouTube so you can search for clips of Skarsgard's True Blood character Eric Northman being hot. Hey, no judgment! Who can blame you? But for the sake of journalism, I will tell you the circumstances of how this picture was taken anyway: Alexander Skarsgard posed fully naked in the South Pole recently when he found himself there for the Walking With the Wounded Challenge, which just wrapped up in Antarctica.

The challenge, according to the website, features three teams of "wounded servicemen and women are embarking upon on one of the most high profile expeditions of modern times, racing across 3° to the Geographic South Pole." Skarsgard, if you don't recall, actually spent 18 months serving Sweden's Royal Navy before he got into acting, so he does have a military background — but the site actually lists him as an "honorary team member" for Team US. The challenge took place over 16 days over roughly 208 miles, as temperatures reached well below -30º F. Cool coincidence: Also participating in the challenge for Team UK was Prince Harry.

The photo itself was posted by Skarsgard's team leader, Inge Solheim on her Instagram, along with the accompanying caption: "#southpole -30C What are you reading Alex? The script for season 7 of #truebloodHBO ? :-)#alexanderskarsgard."

The photo, when you take a good look, does actually look quite similar to Eric Northman's last scene in the season six finale of True Blood, when he went full-frontal while relaxing outside in the snow.

You can check out the photo above. True Blood should return to HBO sometime this summer.

More like this
Jake Daniels Just Became The UK’s First Active Football Player To Come Out As Gay Since 1990
By Sam Ramsden
What Is Jeanie Buss' Net Worth? The Lakers President Is Uber Rich
By Hugh McIntyre
The 'Hocus Pocus' Sequel Finally Has A Release Date & It Makes Total Sense
By Shannon Barbour and Radhika Menon
Grey's Anatomy Fans Refuse To Accept Kaimelia's Shocking Relationship Update
By Brad Witter
Get Even More From Bustle — Sign Up For The Newsletter