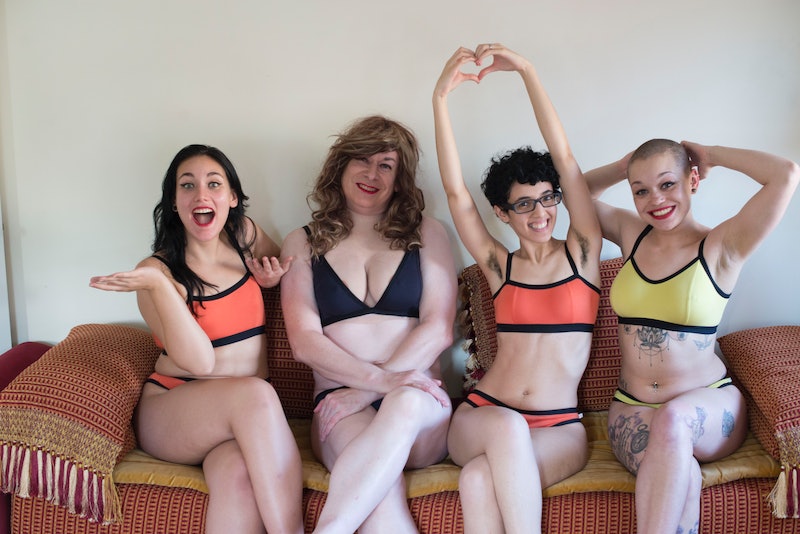 Feminism and lingerie are a combination that, IMO, should go hand in hand. But thanks to our patriarchal society, which often perceives everything feminine through male gaze-tinted glasses, it often feels like our underwear is sold for its sexuality over its practicality. Lingerie brand Neon Moon has been changing the way we view ourselves and our underwear since spring 2015, when the company received over 155 percent of its fundraising goals via online crowdfunding. This week, its back with the #IAmNeonMoon campaign meant to fight transphobia and body shaming in our culture.

#IAmNeonMoon comes alongside a new and diverse photo campaign from the feminist brand. The shoot utilized a cis model, a transgender model, and a model of color to promote Neon Moon's dedication to diversity and body positivity.

Not only this, but one model completely shaved her head through the course of the shoot in order to question the way that lingerie is modeled and marketed in our society, according to the press release for the campaign. It was a challenge to traditional beauty standards in marketing and the media.

Since its birth, the brand has been marketed as "feminist lingerie," setting out to make what feels to me like underwear that women need as opposed to underwear that men want. The concept has been gathering momentum ever since, as Neon Moon has delivered on its promises and is producing bras and panties that give maximum support and comfort in prices ranging from about $30 to $70.

This summer, Neon Moon gained praise and popularity through its involvement in taking down the body shaming social media accounts of Project Harpoon. When the 4Chan born fat shaming campaign took images straight from Neon Moon's website and photoshopped one of its models to appear much thinner, Neon Moon's founder Hayat Rachi refused to let the body policing slide. Not only did the creator of this rad line get the images of her model removed from the Facebook page, but she took an active role in helping the media report on Project Harpoon's harmful practices, campaigning fiercely to have the page removed.

Only three months after its petitioning, Neon Moon is straight back into the world of body positivity with the new campaign and hashtag.

In the press release for #IAmNeonMoon, Rachi commented on the campaign in one of the most body positive ways possible, placing the focus on the comfort and happiness of women both in regards to her brand and outside of it: "Whether a woman has stretch marks, cellulite, body hair, scars, freckles, or any other natural attributes, they are still women. Transgender women should not be obligated to look like cis women in order to be considered beautiful by society. It’s all about women being comfortable in themselves whilst being comfortable in Neon Moon feminist lingerie."

Thanks to the way that Neon Moon bras and panties are designed and manufactured, the shape of the garment depends predominantly on the body that's wearing it, instead of a piece of lingerie that warps the natural state of the body so that it can fit into the garment. This means that the collection is inclusive of the needs of transgender women, who might sometimes require different lingerie needs than their cis counterparts.

“#IAmNeonMoon is a body positive campaign to empower all women and we want to encourage women to confidently identify with our models and feel reflected [...] It’s refreshing to see lingerie models not be sexualized or objectified. Neon Moon has faced its own barrage of hate towards our beautiful models online by body shamers, so we are on a fight back and want others to get involved. Our models are beautiful just as they are, and so are all women. Neon Moon is fighting negative body image head on and wants all women to pledge #IAmNeonMoon to stand in solidarity with not just our models, but all women.”

Clearly, Rachi doesn't just talk the talk, but walks the walk along with her models, all of whom are also refusing to retouch any of the images in these campaigns to boot.

More like this
I Tried Kendall Jenner's No-Pants Look As A Plus-Size Woman
By Sarah Chiwaya
All Of 2023's Biggest Nail Art Trends, According To Top Manicurists
By Jordan Murray
'Love Island's Will Got A Farm Animal Manicure & It's *Adorable*
By Sam Ramsden
Megan Fox & Machine Gun Kelly Are A Masterclass In Emo Couple Dressing
By Avery Matera and Allie Fasanella
Get Even More From Bustle — Sign Up For The Newsletter
From hair trends to relationship advice, our daily newsletter has everything you need to sound like a person who’s on TikTok, even if you aren’t.