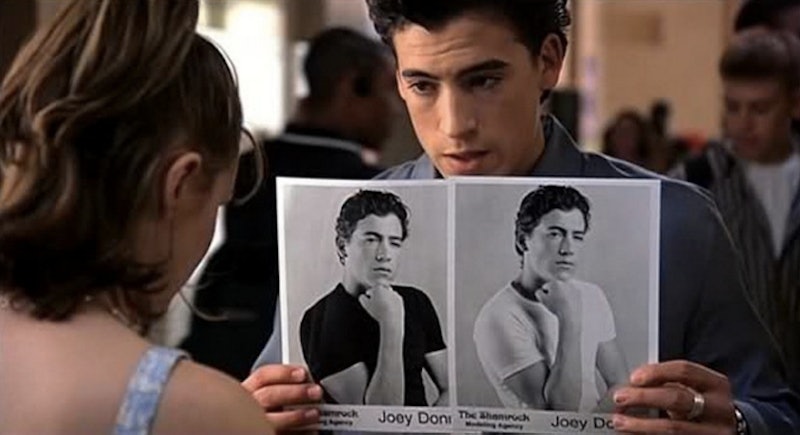 I don't know about you, but clearly one of the biggest milestones in my Lisa Frank-tinted, '90s childhood was Bogey Lowenstein's "it must be Nigel with the brie" house party in 10 Things I Hate About You. I watched this movie on straight repeat, desperately willing my hair to look as long, luxurious, and crimped as Kat Stratford's while also trying to decide if Joey Donner actually looked better in the white tee or the black one (jury's still out). And that's pretty much how Andrew Keegan is still imprinted in my memory: You know, as either the narcissistic Joey Donner of 10 Things fame or as Mary's boyfriend Wilson-with-a-kid on 7th Heaven. Which obviously means that it's high time I put on my Sherlock Holmes-esque hat and get to some serious '90s heartthrob-searching detective work. So, where is Andrew Keegan now? Well, let me bring you up to speed.

Though he does have social media (it is 2015 after all, and '90s girls need to get their Andrew Keegan fix), Keegan's Instagram and Twitter feeds are not as saturated as they once were. While they're now filled with the occasional tweet or photo, usually in connection to the religion that the actor created — because yes, he created his own religion (more on that below) — we're not gettin' those daily selfies like we once were. Still, his feeds are usually filled with love, positivity, and yes, even the occasional '90s reference.

Read on below to see what else he's been up to.

He Created His Own Religion

Last year, the minds of '90s kids were collectively blown once it was revealed that Keegan started his own religion called Full Circle. Full Circle, based in Venice, CA, "is an experiential environment that aims to elevate the individual while connecting us with each other," Keegan says on Full Circle's website. "Much spiritual development is inner-focused. We certainly offer that, but people are also looking for a way to authentically connect with others around a higher purpose. We operate according to a co-creative model, encouraging individuals to seek individual enlightenment while aligning their talents with forces larger than themselves."

Joey Donner would be so proud.

And He's A Master At The Selfie

In his Twitter bio he refers to himself as a "Soul Surfer." I dig it.

The two starred in Independence Day together, though Jakub's most famous role was probably as Lydia Hillard in Mrs. Doubtfire. This entire conversation gives me so much life.

*flashbacks to the time the two starred on 7th Heaven together*

Conclusion? Keegan may not be gracing the covers of Tiger Beat anymore, but these selfies are even better.