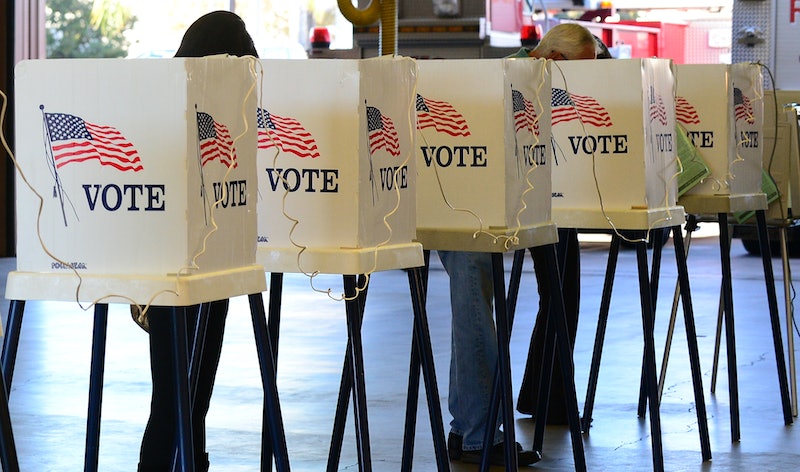 To many people, "voting" means casting a ballot for president once every four years. But there are also local elections every year, and they impact important issues that affect our everyday lives. On Tuesday, the general election will include gubernatorial races in Kentucky and Mississippi, mayoral and city council races across the country, and some major statewide and local initiatives. Aside from simply being a politically active citizen, there are multiple reasons you should vote in your local election on Nov. 3.

Local elections may seem trivial compared to all the hype surrounding presidential elections, but they determine some pretty significant political positions and laws. For instance, Ohio could legalize both medicinal and recreational marijuana, Seattle might drastically change how political campaigns are financed, and Houston will potentially repeal a law which guarantees transgender residents the right to use public restrooms for their identified gender. The outcomes of all of these ballot measures will dramatically affect life in each place. Although most elections are November 3, not all of them are, so be sure to check your state's election date before racing to the polls.

Even if you're not super political, here are four reasons you should absolutely vote in your local election on Tuesday (if your state's election is in fact on Tuesday).

To Have A Say In How Your City Is Run

Just as voting for your congressional representatives helps determine which party has power in Congress, voting in local city council and mayor elections helps determine what political party will lead your city. If you're a hardcore liberal and don't want a Republican mayor passing conservative laws in your city, or vice versa, you have to vote for a candidate you like — that's just the way it works. While Congress is extremely important, the federal government doesn't decide everything about our lives. State and local governments have a lot of control over everything from how your tax dollars are spent to how late liquor stores can stay open, so if you care about what type of people govern your town, you should vote for candidates you like.

That being said, there are also a lot of local initiatives that voters themselves get to vote on, giving voters direct power over the outcome of certain issues. This isn't a power we get very often, so take full advantage. While electing officials whom we think will best represent our interests and values is an indirect way of deciding local issues, voting on specific ballot measures gives you a direct say in what laws govern your life.

In 2011, less than 21 percent of voting-age residents in 144 U.S. cities voted in their local elections, which means that less than a fifth of the population chose their local politicians, and decided on whatever initiatives were on the ballot in each city. When voter turnout is low, elections don't properly represent how citizens feel. The only way to more accurately represent the desires of the population is for more people to vote. No one's reading your mind to determine what you think about traffic lights or school budgets.

You Have To Earn The Right To Complain

In my opinion, if you don't vote, then you shouldn't complain about the outcome of an election or its repercussions down the line. That's like me not doing my dishes for a week and then moaning about how I don't have any clean plates. Complaining accomplishes nothing on its own, while voting might actually affect what's happening around you.

More like this
What The UK Blocking Scotland’s Gender Recognition Bill Means
By Sam Ramsden
The UK Government Is *Finally* Banning Conversion Therapy
By Sophie McEvoy
Watch Jacinda Arden’s Devastatingly Honest Resignation Speech
By Sam Ramsden
Man Meets Politics: ‘Boy Meets World’ Star Ben Savage Is Running For Congress
By Jake Viswanath
Get Even More From Bustle — Sign Up For The Newsletter
From hair trends to relationship advice, our daily newsletter has everything you need to sound like a person who’s on TikTok, even if you aren’t.