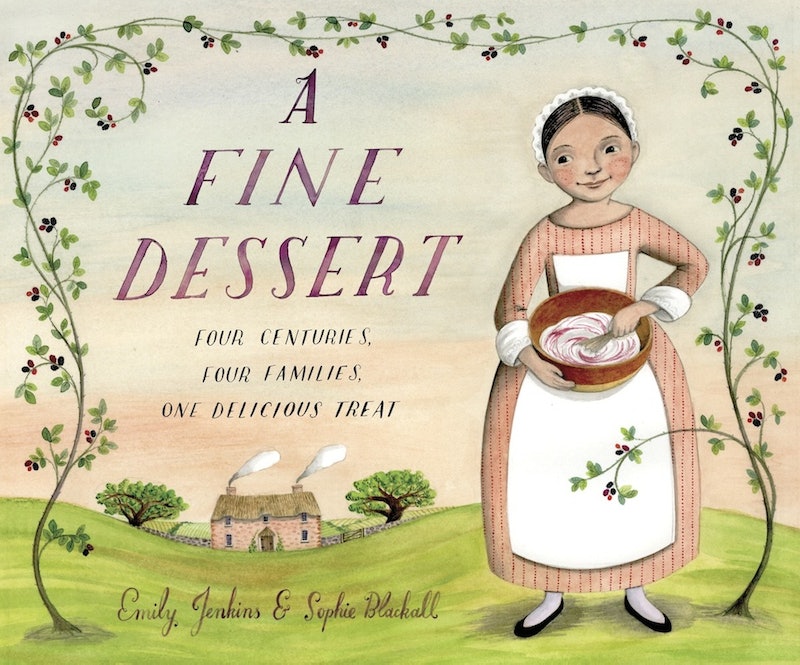 For the past few years, the books world has been having a long-overdue conversation about the need for diversity in literature and what diverse representation looks like. And as part of that conversation, recently a children's book titled A Fine Dessert faced ongoing criticism regarding its depiction of slavery, even as it was nominated for awards. The author's reaction, however, shows just how productive such conversations can be.

A Fine Dessert: Four Centuries, Four Families, One Delicious Treat is a picture book depicting four families in four centuries all making the same dessert, blackberry fool. Among these vignettes is one set in 1810 in which the dessert is prepared by an enslaved girl and her mother. The author and illustrator, Emily Jenkins and Sophie Blackall respectively, clearly had good intentions in including these characters, but the execution fell flat for many. Jenkins, for YA fans, also goes by E. Lockhart, of We We Liars, among many other novels.

Though Jenkins and Blackall do portray slavery as unjust — or at the very least unfair — by highlighting the disparity between the slaves and their masters, the image of slaves smiling and seemingly happy while at work has a long and charged history in the U.S. Such depictions were often used to justify the practice, allowing slave owners to claim that slavery was somehow good for black people. Thus, the image of happy slaves is part of a larger and disturbing historical narrative, and seeing it in a book meant for children understandably touched a nerve for many.

In a blog post back in August, librarian Elisa Gall wrote, "I appreciate the creators’ efforts to not ignore that part of history, but I wonder: Showing smiling slaves might not be ignoring this part of history technically — but isn’t it ignoring a huge, essential part of it? Is illustrating a watered-down snapshot any better than leaving it out all together?"

However, while often these types of conversations make authors defensive and can then turn ugly, in this case, Jenkins spoke out to say that she was listening, and later announced in the comments of a post about the book on the blog Reading While White that she apologized for the mistakes that were made:

I have read this discussion and the others with care and attention. I have come to understand that my book, while intended to be inclusive and truthful and hopeful, is racially insensitive. I own that and am very sorry. For lack of a better way to make reparations, I donated the fee I earned for writing the book to We Need Diverse Books.

Clearly this is not the first time or the last time that issues surrounding diversity and representation have come up in the world of children's literature. And discussing such issues is essential, despite the fact that bringing up such problems often provokes a great deal of backlash. However, hopefully as time passes, responses like Jenkins' will become the norm, rather than the exception.

Because if people are willing to listen, to learn, and to accept criticism, hopefully we will need to have these conversations a lot less frequently.

More like this
I've Read The Harry Potter Books 30+ Times & This Plot Hole Haunts Me
By Kelsey Stiegman
The Viral 'Little Miss' Franchise Is Focusing On Mental Health Next
By Darshita Goyal
The Biggest Differences Between 'Bullet Train' & The Book It’s Based On
By Arya Roshanian
10 Must-Read New Books Out This Week
By K.W. Colyard
Get Even More From Bustle — Sign Up For The Newsletter