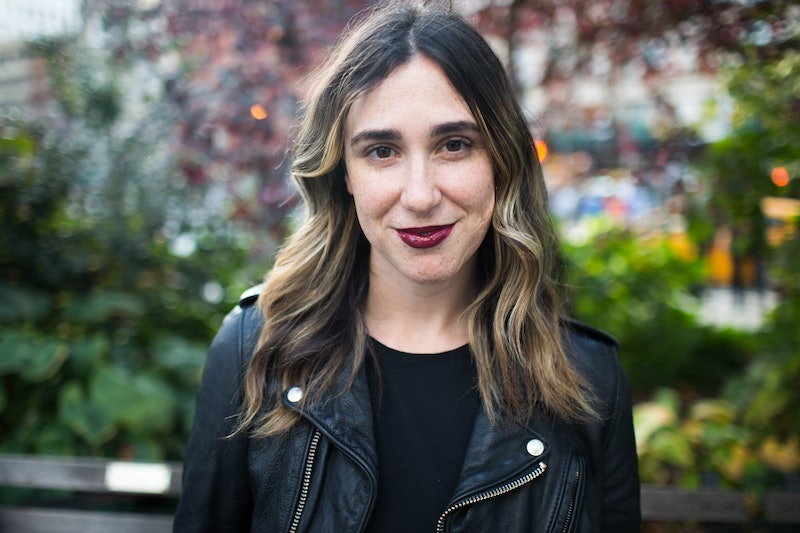 The phrase "I could never pull that off" has always been a pet peeve of mine. At best it's a backhanded compliment; at worst, it's a reveal of low self-esteem. And honestly? It's my professional fashion editor opinion that we should stop limiting our wardrobes with nonsense rules. Despite being 5'3" with "really weird, wonky ankles" (thanks, person I worked with during college), I happen to love wearing midi skirts, and I'm pretty fed up with people who tell me I'm brave for doing so. But opinions, like a DIY organic dye job, pale in comparison to science, so I gathered up some co-workers, put them in some outfits they swore they'd never be caught dead in, and dragged them out into wild. It was time we got to the bottom of this damned phrase. Is it true that people can't, in fact, pull something off?

After compiling a stack of so-called risky clothes — boyfriend jeans! flare jeans! leather jackets! dark lipstick! — I told my friendly fashion risk takers to put on the outfits they'd always shied away from and dance around in the streets of New York during peak lunch break-hour while a photographer followed them around snapping photos. A week or so later, I showed them the final photos. In my fantasy world, they'd be struck with the instant revelation that "pulling something off" is as simple as putting that something on. For a few of my subjects, my total immersion method was a complete success. Others hated me just a little bit more for making them go out in public with violet lippy (accidentally) smeared on their teeth. Here's how it all went down.

Thing She Can't Pull Off: Furry vests. "They make me look too chesty."

Kelsea wasn't totally sold on the vest with this outfit, though she was pretty pleased with how incredibly warm it kept her. "It's like wearing a big, cozy blanket... but you get to look cool!"

I showed Kelsea the photos a couple days later, and she preferred this lightweight flannel and vest look to the sweater and vest combo. "I love that it makes my general lazy day look — ripped jeans, flannel shirt, flat boots — actually seem super put together," she says. "I'd totally wear the vest again. It was one of the comfiest fashion risks I've ever tried."

So far, my experiment was going exactly as planned. Exxxxxcellent.

Thing She Can't Pull Off: Boyfriend jeans. Sam's been a skinny jeans devotee since her high school days as an emo kid, and has always been intimidated by the possibility of loose boyfriend jeans making her look shapeless.

Paired with a very important graphic tee and some sweet metallic kicks, Sam took to her boyfriend jeans almost immediately. "I didn't know they could be tight around the butt!" was one of her first happy exclamations.

Some of the boyfriend jeans Sam tried on felt too baggy, but she loved how these fit and definitely plans to add some relaxed denim to her wardrobe. "I think I look much more stylish than usual," she says. For Sam, this was a lesson in understanding that you won't like every single version of a style, but you won't probably hate every single version, either.

At this point, I was feeling pretty proud of myself for opening up a whole new world of clothing for these women, especially when this happened about a week later.

Thing She Can't Pull Off: High heels and, subsequently, flare jeans "because they usually require high heels." She felt that flare jeans make her look like she was taking up too much space, while the high heels make her "feel physically handicapped."

Unlike Kelsea and Sam, Julie was not immediately feeling her look. "I feel like a blogger, but not in a cool way." It likely didn't help that I unknowingly picked two of her other style insecurities for this first outfit: turtlenecks and hats. "Walking in heels is so hard," she complained. I'll give her that.

After seeing the photos, Julie sent me an email saying, "I don't know that I would choose to wear those big heels and wide-legged pants again. I took up a lot more space than I usually do when wearing these clothes." She continues to write that the experiment made her realize something about the way she dresses herself.

I mostly dress my body so as to appear as small as possible. As a woman, I've been taught that being small is attractive and desirable, and so it's something I strive for in my appearance. While I truly believe that all bodies are beautiful, be they tall or short, big or small, this photoshoot made it obvious to me that I don't apply that same acceptance to my own body. I think that wearing these clothes could be an exercise for me in learning to feel confident and attractive without feeling small.

Ugh, this. It's way, way too real. Many of us tell our loved ones they're amazing no matter what, but have a hard time truly believing the same for ourselves. Despite the mostly negative reaction she had to herself, Julie's outfit inspired other women in the office to pull on a pair of flare jeans the next day for the first time in years. They thought she just looked so damn good. I tend to agree.

Thing She Can't Pull Off: Scuba material aka neoprene. "It's supposed to be this very figure hugging material, but I always feels like it just sticks out in weird places," Marie explains.

"I think I look rather cute!" Marie tells me. "I wouldn't necessarily say I look 100 percent like myself, but I definitely appreciate the sartorial experimentation element."

Would Marie wear scuba again? She'd definitely consider it now more than she would have before. "The thing with scuba is that it's almost Spandex-y, and I love the idea of wearing something tight to the body as a kind of 'eff you' to so-called plus size fashion rules," she explains, noting that she realized she likes some types of scuba more than others. "Trying out these styles did help me remember that sometimes it's not about the style at all. It's about how it fits you and makes you feel," she says. "So in that respect, I'm definitely up for wearing it again should I find something a little more me."

For the first outfit, Justin struggled more with the leather jacket than the skinny jeans he had first been most anxious about. He tried it zipped, unzipped, half zipped... but ultimately was eager to take it off for outfit number two.

The layering in this outfit was much more Justin's speed, so even though the pants were way tighter, he felt more comfortable.

After seeing the photos, Justin admitted his initial reaction was a bit strange. "It's not that I don't like it," he explains. "I feel that I could see myself wearing these looks in an alternate universe, where I was the same, but different." Ultimately though, he was convinced he should add some skinnies to his wardrobe. "Wish me luck!" he says.

Thing She Can't Pull Off: Dark lipstick. "With my freckles... it's just too much going on," she tells me, drawing an air circle around her face.

This lipstick adventure was quite the stress inducer for Jordan. It wasn't that she didn't like this shade of purple; it was the anxiety of wondering if the lipstick was staying where it was supposed to. "I spent the entire time worrying I would accidentally rub it all over my face," Jordan says. "Spoiler alert: I did."

Despite the intense stress, Jordan was ultimately down with the new look. "It's a bit weird to see something so dramatic on me," noting that Glossier's minimalistic products are generally her go tos. "But it's fun to change up your look and step outside of your comfort zone."

Can We All Pull Off Everything?

I showed a handful of other people the photos of my experiment: Could they tell which item the subject "couldn't pull off"? Of course not. Not one of them remarked that Julie looked like she was taking up a lot of space or that Justin's legs looked weird in his skinny jeans. In fact, the strangers shuffling through the photos mainly remarked on how tempted they were to go out and buy the types of clothes in the pictures because everyone was pulling them off so well. There were no obviously awkward pieces to outsiders whatsoever.

Of course, there's a difference between not wanting to wear something (I don't like high heels, so I opt for loafers and sneakers) and feeling like you can't wear something (in middle school, I believed my legs were "too skinny" to be able to wear short skirts). If you don't want to wear a furry vest or sky high heels or boyfriend jeans, don't. I'll be right there next to you in my flats.

However, if you find yourself thinking or saying, "oh I could never pull that off," think again. It's literally a nonsense phrase. The fact that no one looked at these photos and recoiled in disgust at the attempts to pull off such outrageously unflattering (another insane, made up qualifier) outfits proves that it's all in your head. Rather than limiting your wardrobe — and therefore your excuses to go shopping — try talking to yourself like you would to a friend. Tell yourself you look hot in everything, and that anyone who says otherwise isn't worth your time. And then run immediately to the mall and try on that trendy thing you've been putting off purchasing despite being completely obsessed with how everyone's wearing it on Instagram. You might not dig every version of a particular style, but I'd bet a year's worth of Chipotle that there are some out there you're gonna love.