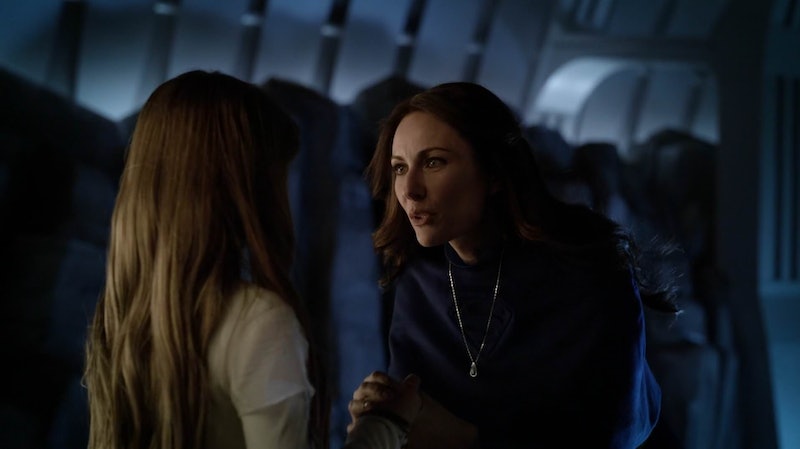 The fact that Kara Zor-El remembers life on Krypton is a key component that separates her from Superman in this mythology. The role of Supergirl's mother Alura Zor-El on the CBS series makes this even more of an original tale. Kara's mother may have perished on Krypton after waving goodbye to her daughter, but her story doesn't end there.

We learned in the pilot that Alura was a judge on Krypton who sent many dangerous criminals to Fort Rozz in the Phantom Zone, an area where time is suspended. No wonder Kara felt like she wasn't living up to her potential as a media assistant. Not only does she have superpowers, but her mother had high status job. Unfortunately, Kara's ship dislodged the prison, the convicts crash landed on Earth like her, and they all escaped. Now, the prisoners (some lead by her evil Aunt Astra) are seeking revenge on the daughter of the woman who locked them up. Which, if you ask me, is a little unfair. Didn't Kara technically free them? Like... you're welcome, prisoners of Fort Rozz.

However, the appearance of the evil General Aunt Astra on Supergirl doesn't mean that the show is done with Kara's mother or replacing her in any way. It was super heartbreaking when the first person Kara recognizes from home attacks her, but she is able to contact and take guidance from her mother in a way. We'll see more of Alura in Season 1, who along with Astra is played by Tony award-winning actress Laura Benanti on the CBS series — thought it will be be via flashback and hologram. We saw both of those in the second episode and there will be more to come. The hologram concept is a little difficult to grasp, at least in my opinion, though it it well-woven into the Supergirl and Superman lore. However, the show did a good job of explaining how they are a type of artificial intelligence rather than just "voicemails from the past."

"I think it's always fun to play someone evil," says Benanti. "I think it's even more fun to play light and the dark. You know, to have an opportunity to play Alura who is a deeply good person with the best of intentions. To then play her sister, who thinks she's doing the right thing and believes in what she's doing, but just is going about it in ways that are particularly violent and difficult for us maybe to understand as compassionate humans."

While Astra is new to the Supergirl mythology, her sister should be familiar to DC fans. In the comics, Alura In-Ze (her maiden name) married Zor-El and sat on the Science Council in Krypton. That's different occupation, but still pretty rad. Alura was responsible for sending criminals to the Phantom Zone in the comics as well, and cared deeply about Kryptonian culture. She also, get this, survived the destruction of Krypton. So, it's definitely possible that, on the television series, we'll see Alura on Earth in the future. Then we could see both Astra and Alura in present day scenes together, and all of my Parent Trap dreams will come true!