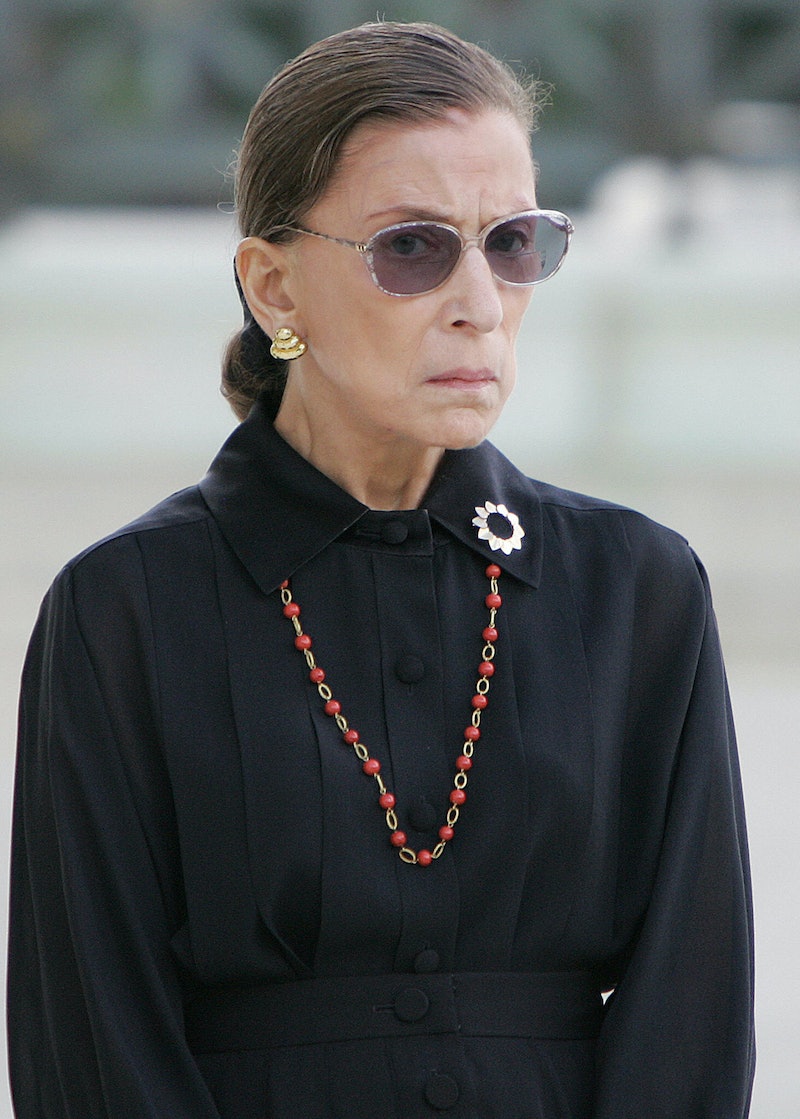 Supreme Court Justice Ruth Bader Ginsburg has more than earned her reputation as a brilliant legal mind, champion of women and minorities, and general badass. The 82-year old is the oldest member of the Supreme Court, a moderate-liberal judge, and a lifetime advocate of feminism, workers' rights, and the separation of church and state. There are quite a few fascinating facts about Ruth Bader Ginsburg that you need to know if you're a fan of her.

In recent years, Ginsburg become something of a pop culture icon as well. A Tumblr dedicated to her, "Notorious R.B.G.," has been turned into a book, released this past October, by Irin Carmon and Shana Knizhnik. The same month, in a clip released by Comedy Central to promote the upcoming season of Broad City, Abbi Jacobson dressed as Ginsburg for Halloween, forever putting plain 'ol cat costumes to shame. Ginsburg inspired countless memes after speaking strongly against the Supreme Court decisions in Gore v. Bush, Citizens United v. FEC, and Shelby v. Holder. But Ginsburg is an impressive individual even without her signature robe and lace bib, aka a jabot. (Also, Natalie Portman is going to play her in a biopic! YES.)

If you don't know, then now you do.

"Strong in body and mind" certainly describes Ginsburg. In 1999, she was treated for colorectal cancer. Then, in 2011, she underwent chemotherapy and surgery for pancreatic cancer. As if that weren't enough, doctors performed heart surgery on her in 2014. Despite all this, she insists that she will remain on the court. “Anybody who thinks that if I step down, Obama could appoint someone like me, they’re misguided,” she told Elle Magazine.

2) She's The Star Of Her Own Comic Book

It's the perfect holiday gift for the feminist comics lover in your life. Part of the "Female Force" series, which highlights extraordinary women making a difference in society (Hillary Clinton, Nancy Pelosi, and Gloria Steinem have also been featured in the series), Bluewater Productions created the comic to tell the story of Ginsburg's life and extraordinary career.

These two could teach a lesson to the politicians in Congress. In an interview in 2008, Scalia said, "My best friend on the Court is and has been for many years, Ruth Ginsburg. Her basic approach is not mine, but she’s a lovely person and a good loyal friend." The two attend operas together, and for decades, their families celebrated New Year's Eve together. According to USA Today, Ginsburg's deceased husband, Martin, used to cook whatever Scalia had hunted that day.

"What I like about him is that he's very funny and very smart," Ginsburg told Elle of Scalia.

4) She Can Do More Push-Ups Than I Can

After her battles with cancer, Ginsburg began working with a personal trainer to maintain her health. She works out twice a week with a former military parachuter in a justices-only gym in D.C. Her workouts normally include a run on the elliptical and muscle-toning work. “When I started, I looked like a survivor of Auschwitz,” Ginsburg told The Washington Post. “Now I’m up to 20 push-ups.” Seriously, wow. I can only do like 15 on a good day.

The dean of Harvard Law School asked Ginsburg, a student there in 1956, why she and her eight other female peers were taking up space that could be filled by men. Incensed, she became a lifelong advocate for fair treatment of women in the workplace. In 1963, she joined a campaign at Rutgers Law School, where she was a professor, to demand equal pay for female faculty members. In 1972, she helped create the Women's Rights Project at the ACLU.

6) The Author Of The First-Ever Casebook On Sex Discrimination? Yup, RBG

Ginsburg was a busy woman between 1972 and 1980, during her time as a Columbia Law School professor. In addition to teaching, writing articles, and directing the Women's Rights Project, she somehow found time to write a legal textbook that documented cases involving gender discrimination. And according to the Notorious RBG book, "She insists that the authors' names be listed alphabetically, even though doing so [meant] the one man's name [would] come first."

A couple of years before SCOTUS made same-sex marriage legal in all 50 states, Ginsburg chose to personally help gay couples break boundaries. In August 2013, she officiated a wedding for two men at the Kennedy Center in Washington, D.C. One of them was a longtime friend. "I think it will be one more statement that people who love each other and want to live together should be able to enjoy the blessings and the strife in the marriage relationship," Ginsburg said.

8) Her Husband Was A Total Feminist

Although he had a full career as a lawyer and tax law professor at Georgetown University Law School, Ruth and Marty shared domestic responsibilities, including raising their two children. Marty did all the cooking at home during their 56-year marriage. For a member of their generation, that's pretty progressive. Ginsburg said that Marty was "the only young man I dated who cared that I had a brain." By almost every account you can read of these two, they seem to have had a marriage of equality and mutual respect. In a note to his wife before he passed away in 2010, Marty wrote, "I have admired and loved you almost since the day we first met at Cornell some 56 years ago. What a treat it has been to watch you progress to the very top of the legal world!" Awwww. Excuse me while I go cry a little.