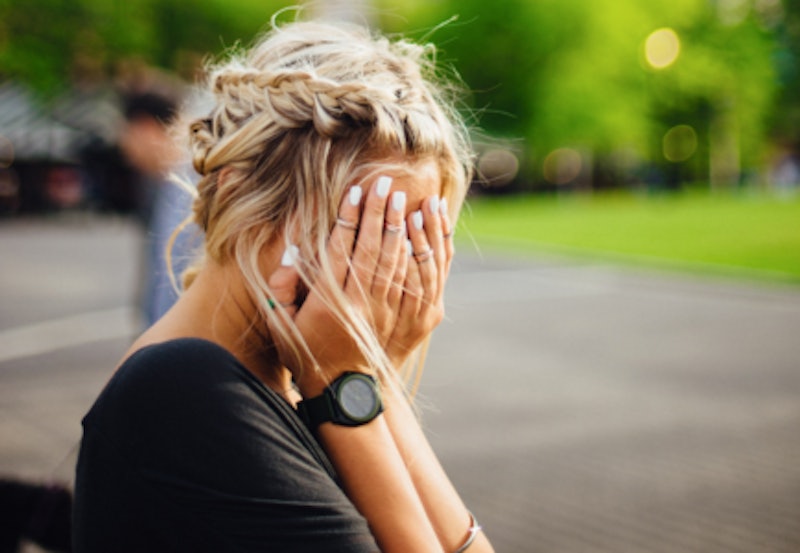 Everyone overthinks everything. In a world where rationality is favored over all else, we deprive ourselves of some of our most inherent and powerful mechanisms (the subconscious brain, intuition, our emotional responses) in favor of thought. Because we grow to value our tiny bit of often irrational, highly influenced conscious thought over everything else, we try to understand everything else through it. Eventually what most people come to realize is that your mental and emotional lives are separate, though they can (and should) work together.

We overthink as a past time. At dinner with friends, on hours-long phone conversations, during small talk, when our minds are not preoccupied by something more important. We overthink as a means of trying to manipulate ourselves and the experiences in our lives to be more aligned with what we think they should be, to be more aligned with what we think other people want to see and experience. In essence, we overthink because we think it's a noble, worthy past time. It does something for us. It makes us safe. It makes us better. The more we understand, the more we're aware of every potential outcome, the more likable we are, the more likely we won't be surprised by anything.

Of course, the irony is that all of these assumptions are illogical — and false. The unexpected will occur regardless. Other people's opinions are out of our control regardless. It ultimately becomes very difficult to see this objectively, and to determine whether or not you're overthinking something or just evaluating, dissecting and rationally analyzing it as you "should." So here are eight main signs that you've gotten to the point of overthinking (as opposed to just being healthfully conscious).

Essentially, you're just ruminating in the negative possibilities, all based on factors for which you do not, and cannot, know. This is how we try to control situations that are unknown to us, but in reality, we are not doing what we are intending to do. We won't know the outcome regardless, and expecting the worst tends to manifest the worst.

You're Past Three Or Four Point/Counter-Points

Once you're past a few back-and-forth points in your head, you're probably at the point of overthinking. When it comes to our mental/emotional/social lives, the answers are always simple, and rarely require analysis — rather, self-awareness and attention to our responses, and genuine emotions.

You're Trying To Figure Out How Someone Really Feels

You cannot — and probably will not — ever know what someone else is feeling, and it's not something you can "figure out" by thinking about it some more.

In case you haven't noticed, believing that something is "meant to be" doesn't make it so. If the Universe does send "signs," they wouldn't be directive — they'd be supportive. What this means is that you wouldn't have to rely on a random sign to tell you what to do. Rather, it would either support or deter you from continuing a course of action. That's what a "sign" means — literally, and apparently metaphorically too.

Like deciphering unknown emotions (or intentions!), you're overthinking if you're basing something on how you think someone is seeing or responding to you.

You're Trying To Figure Out What Something "Means"

"Meaning" isn't something you usually have to think through. It's second to your initial mental and emotional reaction. Meaning is not self-applied, it's self-generated. If you want to change what something means in your life, you change the way you think about it, how for how long, or to what analytical degree.

You're Simply Thinking More Than You're Living

When you get to the point of thinking about your life more than you're actually living it, you're "overthinking" simply by virtue of doing it too often, not just being overly-analytical.

Your Conclusions Do Not Match The Reality In Front Of You

For example, despite someone telling you that they are not interested in you romantically, you find reason to believe the opposite is true, even though the person in question behaves in accordance with their assertions. What this means is that even if they talk to you, claim they love you, give you all kinds of "signs" to dissect, if they aren't with you or aren't pursuing you... you have to take their word for it. Not hope your supposed perspective will be more true.