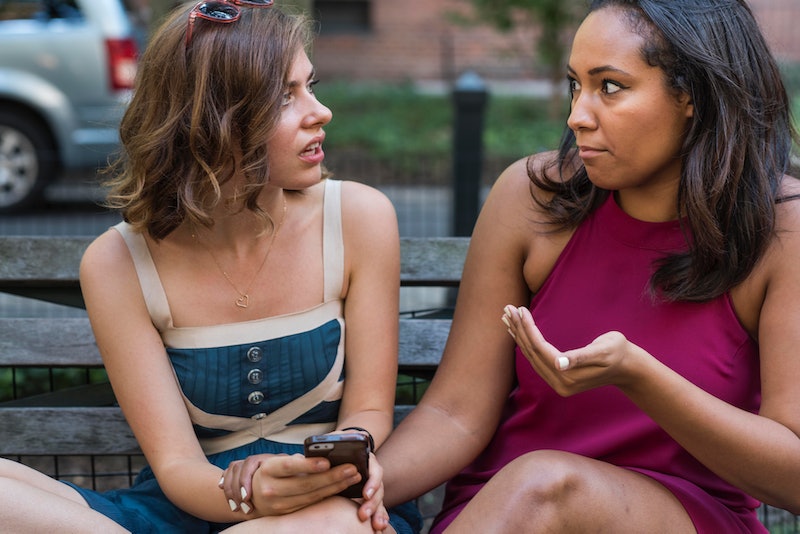 Jealousy isn't fun, and we're all likely to experience it over the course of our lives, no matter how perfect our relationships seem from the outside. But it can seem like an uncontrollable tide: the "green-eyed monster" (which, in your trivia fact of the day, was a description first coined by Shakespeare in that jealousy epic Othello ) descends upon us, and we can barely see straight. In fact, a 2010 study showed that the strong experience of jealousy really does blind us: women who are feeling incredibly jealous are so distracted they become unable to spot really obvious things. It seems faintly incredible that nobody's used this to get out of a traffic citation yet.

But the truth is that jealousy can be stopped — or at least understood. If you dive into the science and psychology behind our experience of jealousy, you can uncover a lot of things that could guide you through the maze to a solution. Weirdly, the part of the brain most associated with the neurological experience of jealousy is the left frontal cortex, which is usually associated with happiness and sociability — but it's that sociability that may be turning on itself, demanding that we possess the one we love.

If you're trying to weed the green-eyed monster out of your life for good, science can help. Here are seven tips from studies on jealousy to help you deal with the feeling more constructively.

1. Understand The Precise Definition Of Jealousy

We often misuse the word "jealousy," putting it in as a substitute for "envy". It's nothing of the sort. Envy is what we feel for other people whose lives we want to have; jealousy is what we feel for things that we have and want to keep. It's about possessiveness and the fear that a particularly valuable asset might be taken from us; so you can say a protective father is "jealous of his daughters," or a miserly millionaire is "jealous of her money".

The scientific world is divided on whether jealousy is a uniquely human emotion. After all, possessing something that you want to protect is not just a human thing; many animal species hoard, collect valuable things, and want to keep them for themselves, whether it's a mate, food, a nesting space, or offspring. Some experiments seem to show that dogs grow distressed and upset if an owner plays with another dog or a stuffed animal instead of with them; but does this mean they're actually jealous, or just confused or threatened? We may never know. But humans definitely feel jealousy — and it can ruin their relationships.

Interestingly, there seems to be a serious difference in the ways in which males and females demonstrate their jealousy. Part of that may be because they tend to be jealous about different things — which we'll get to later — but if you've suddenly started caring a lot about your looks and posting endlessly about your relationship on social media, you may actually be conforming to some scientific ideas about how jealousy shows up in your gender.

A famous study back in 1997 called, somewhat ominously, "From Vigilance To Violence," focused on what jealousy looks like in marriages — or, as they call it, "mate-guarding". Jealous women started to try to improve their appearance and to display their relationship prominently to others (cute Instagram posts, I'm looking at you), while men were likely to respond to a perceived threat by flaunting their job or their wealth, or to start doing a lot of small things to please their partner, submissively. So if you're feeling the sudden need to go Facebook-official or your partner's always chatting about his latest raise with your friends, you may need to have a talk.

3. Figure Out If Certain Factors Make You More Vulnerable

One study, in Evolution and Human Behavior, found that people of certain heights seem to be more prone to jealousy. Women of "average" height and taller men tend to be less worried about the fidelity of their partners. Scientists theorize that these traits are the most idealized heights of each sex, so these people feel more secure in their attractiveness. If you're tiny or super-tall, then, you might be more at risk of the little green monster.

Men, according to the same 1997 study we looked at before, are more likely to get jealous when their partners are young, attractive, and of child-bearing age. Perhaps for this reason, studies have shown that jealousy's most likely to pop up in your early twenties, if you're unmarried, don't live with your partner, or married really young.

Either way, you shouldn't neglect jealousy; science says that sticking around in a relationship where you're perpetually insecure and worried is more likely to lead to developing an alcohol problem. Yikes.

4. Determine Each Partner's Interpretation Of "Cheating"

A now-famous study by the Archives of Sexual Behavior in 2014 found out something very interesting: when it comes to jealousy, there's a definite gender divide about what type of activity that constitutes cheating. The study interviewed 63,894 participants were a combination of straight, gay, and bisexual, and the results revealed that men are far more affected by sexual indiscretion, and women more upset by emotional infidelity.

Now, it's not a completely uncontroversial study. Part of this sort of divide might be societally created (it doesn't mean that women are inherently more sentimental), but it does definitely mean that people in a serious relationship, of any gender, need to have a discussion about what they consider to be "cheating" and how it would make them feel. (Here's a handy list of questions to help you figure that out.)

5. Get To The Root Of Jealous Behavior

Jealousy is actually partially genetic. A recent study talked to over 3000 pairs of twins, some with only 50 percent of identical DNA, some with 100 percent (fraternal versus identical twins), about their feelings of jealousy. It turns out that around a third of relationship jealousy, whether it's sexual or emotional, is actually likely linked to some kind of genetic factor. We're not entirely sure what, but it's important to realize that if you have jealous brothers or sisters, or jealous parents, you're more likely to encounter the feeling in yourself.

But that's only a part of the story. A third isn't very much — and the study indicated that two-thirds of the rest comes from environmental factors, sometimes when we're growing up. Psychology Today reckons the causes for jealousy can be divided into three parts: projection, protection, and competition.

Projection is anxiety because you yourself have been feeling tempted to cheat; protection is produced by distrust; and competition is the sense that you haven't fully earned the partner's love, and are constantly in a race to "keep" it. The last of these, in particular, is likely to have emerged from a period in your life without secure affection. So figure out what your jealousy is doing and where it's coming from, with the help of a therapist if necessary.

6. Beware Of Inner Voices Dragging You Down

Jealousy, according to psychological research, can manifest as a negative thought cycle, which is familiar to depressives and anxiety disorder sufferers: the constant barrage of thoughts like "I'm not good enough," "I'm not lovable," and "No wonder she likes her better". This is a much more dangerous form of jealousy than simple anger and distrust at a partner, as it corrodes not only the relationship but your own self-esteem through constant self-abuse.

If you find yourself caught in this sort of jealousy cycle, you may be in need of cognitive behavioral therapy, which will help you unravel the self-defeating thoughts, understand where they come from, and stop them in their tracks before they derail your sense of security and self in your relationship.

If you're constantly monitoring a partner — checking their texts and social media, calling them to see what they're up to, calling their friends to verify it, showing up unexpectedly — quit it. Controlling behavior doesn't solve jealousy; it likely only pushes partners away rather than giving you reassurance of their fidelity. And, more importantly, it's seriously problematic; partner-controlling like that is associated scientifically with a wider risk of sexual and physical violence in a relationship.

Instead, sit down and have a talk, with both your partner and yourself. Jealousy, as Psychology Today points out, is not a sign of love: it's often a demonstration of insecurity, anxiety, inferiority, or dependence. If you seriously feel as if they're untrustworthy, find ways in which to rebuild that trust, and figure out how you lost it in the first place. If they haven't given you any indication that they'd ever cheat, the real worry may be in how secure you feel and how much value you give to yourself. If it's seriously eating up your life, get a counselor to help guide you both through it.