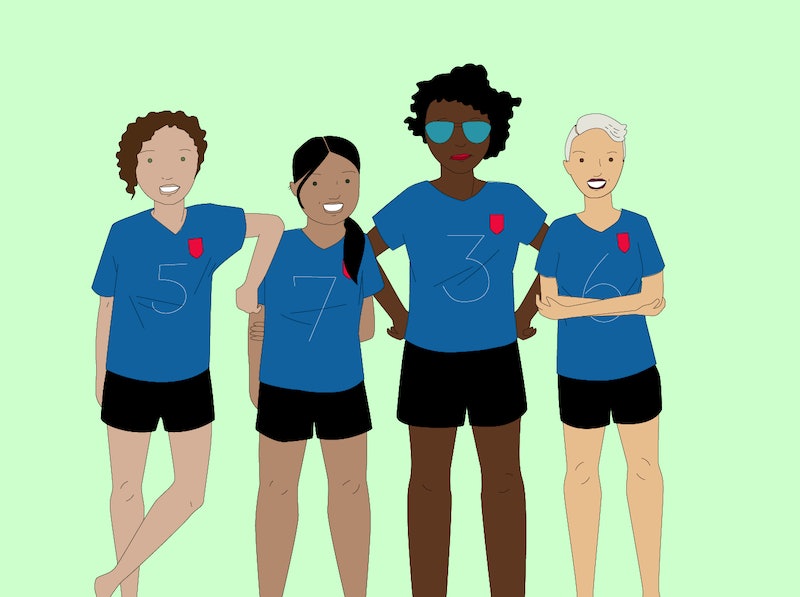 These days, most of us are lucky enough to be presented with a lot of media that tells us what body shaming actually is. One thing we're missing, however, is information on what to do when confronted with body shaming.

For me, learning how to react in body shaming situations has been a long process. When I was in my early 20s, I worked in a restaurant that had somewhat of a reputation for serving a lot of alcohol to a lot of assholes. Men (and sometimes other women) regularly treated me to comments and opinions about my 6-foot, 220-pound body, ranging from innocent curiosity to passive aggressive concern to downright cruelty. I was young, so I handled all of the situations with varying degrees of awkwardness and/or anger — once I even knocked someone's drink off their table accidentally-on-purpose, but said nothing at all.

Thankfully, recent years have taught me that body shaming interactions don't always have to end with the receiver of the shaming feeling like complete and utter garbage (or breaking any dishes). There are plenty of things to keep in mind when you encounter body shaming. In my experience, they've not only improved the situation in the moment, but helped me improve my ability to handle body shaming in the future. So the next time you encounter body shaming — be it directed at your or towards others — try to keep these seven things in mind.

This is the first thing you should keep in mind when you encounter body shaming, as your choice to un-internalize might help you decide what you do next. Think about it: If you immediately take someone's shaming words to heart, you might end up being too hurt or embarrassed to take the interaction any further.

Remember that the shaming, cruel things another person says are about their own prejudices and misconceptions, not about who you are as a person. Though it might be the shamer's intention to make you feel like crap, you don't have to absorb their words, take them seriously, or think about them for any longer than the moment.

2. If You Can Defend Yourself Or Others, You Should

If you're mentally and emotionally strong enough to defend yourself or another person from being body shamed, you should. Some people might think it's not their place, or that it's not worth it to stand up to the person doing the shaming. While it's probably not a good idea to get into a serious verbal or physical altercation, it's worth taking them to task and defending yourself or others. If your emotions aren't getting the best of you, try to speak with the offending person directly and explain why their comments are harmful.

It's great if you feel strong enough to stand up against body shaming, but if you can't, it doesn't mean you get bad marks. Depending on our life situations, circumstances, and past experiences, we simply might not have the chutzpah to stand up for ourselves.

There have been a handful of times when I, a normally brash and unrelenting conversation partner, have simply shrugged my shoulders at the words being said to me, purely because I didn't have it in me to argue at that moment. We live in a world where dealing with shaming imagery and messages is literally an everyday, non-stop thing. No one will blame you for being exhausted by it all. Simply put, you're allowed to choose your battles.

For example, if the offending person is a member of the family or a good friend, letting their dinner table comment slide and not disrupting what is otherwise a pleasant evening might be an act of self-preservation. In those instances, try gathering your thoughts and talking with the person privately later on. Additionally, it might not be worth your sanity getting into a long discussion about body shaming with someone who seems wholly committed to being ignorant and cruel. It might sound odd, but my best tactic for determining if someone is worth educating is to simply ask them if they'd be open to hearing another side of the story. Based on the tone of their response, you'll know if they're a lost cause or not.

If someone screams, "Hey, you fat/skinny/short/tall/etc. bitch," then it's pretty obvious that they're body shaming you. Unfortunately, those situations are much rarer than subtle body shaming.

Sentences regarding "good" food and "bad" food, "flattering" outfits, and "real" women have body shaming subtexts that shouldn't be ignored. However, because those messages are so prevalent and commonplace in our society, the person saying them might not know that what they're actually doing is body shaming.

If the body shaming is coming from someone you care about and trust, try to engage with them. It might mean the difference between a negative interaction and an experience that can be ultimately positive.

5. Anger Is An Acceptable Response

Society often has an incredibly dangerous attitude that dictates the type of responses that women have to conflict: When we encounter it, we should demurely lower our heads, only indicating our disagreement (very politely), or trying to change the subject. However, the expectation for women to remain polite and/or look the other way is rooted in misogyny, and it's part of what keeps us oppressed.

That being said, body shaming is conflict, and if you encounter it and it rubs you the wrong way, you're allowed to get angry: Unabashedly, vocally, red-facedly angry. In certain contexts, body shaming should spark anger. If you feel that rage bubbling up inside of you, there's probably a good reason for it. Don't be afraid to express it.

However, it's important to note that anger expressed directly at the cause of the anger, in the heat of the moment, is rarely productive. Instead, unapologetically let the person know you're angry, remove yourself from the situation, and use the energy you would have spent yelling and screaming to brainstorm ways to fight against body shaming in the future. As mentioned in No. 3, you can then decide if the particular person who stoked your anger is worth rehashing the issue with in the future.

6. It's A Potential Opportunity To Educate

When the cruel words have been said and your anger subsides, remember that many negative interactions like this have the potential for a positive outcome. Maybe that means you direct the body shamer to some body positive resources to consider, or maybe it means you take away lessons that will help you handle a similar situation better next time. Perhaps the people around you will learn from it as well, even if they don't say so. It's difficult to find the positives in body shaming, but if you keep an open mind, you'll find them.

Not all body shamers are created equal, and therefore not all body shaming experiences are either. You might come across an overtly cruel body shamer who wants nothing more than to hurt you and impose their bad ideas onto you. Then later, you might meet someone who simply had no idea that their words were actually harmful, and would be open to doing better in the future.

With something as pervasive as body shaming, it's possible to encounter it from all angles, all different kinds of people, and structured in many different ways. Try to gauge and handle every situation differently, as there's no one-size-fits all approach to something as nuanced as this.

These are just some of the personal tactics that I've found successful when it comes time to confront body shaming. The next time shaming like this rears its ugly head, keep these points in mind and remember: No matter what you do, you're helping fight a battle that we all deserve to win.

More like this
I Tried Kendall Jenner's No-Pants Look As A Plus-Size Woman
By Sarah Chiwaya
42 Black Owned Fashion & Beauty Brands To Support Today & Always
By Mekita Rivas, Shea Simmons, Kui Mwai and Dominique Norman
'Stranger Things' Finn Wolfhard Is “Proud” Of Noah Schnapp For Coming Out
By Sophie McEvoy
These Brilliant Things Make Having A Dog 10x Less Gross
By Caroline Reinstadtler
Get Even More From Bustle — Sign Up For The Newsletter
From hair trends to relationship advice, our daily newsletter has everything you need to sound like a person who’s on TikTok, even if you aren’t.