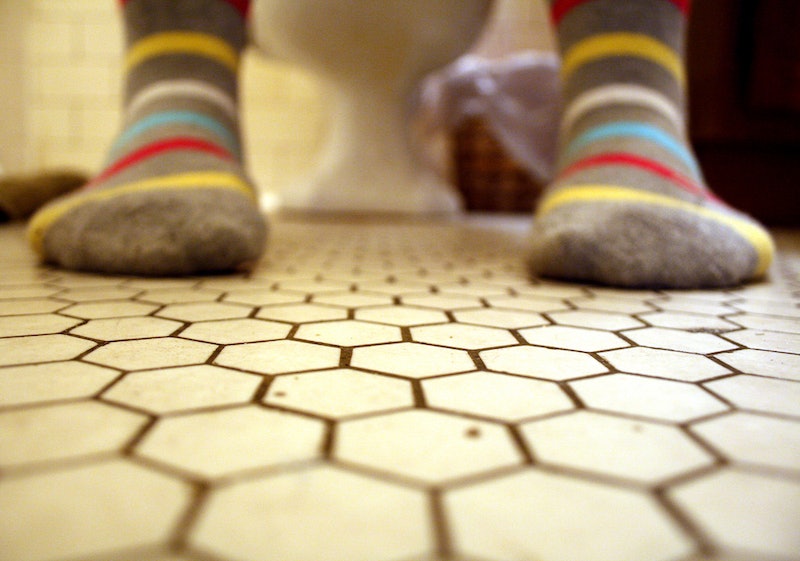 Anyone who has experienced a urinary tract infection (UTI) can attest to this — they are freakin’ painful! UTIs start at the end of the urinary tract, and occur when gastrointestinal bacteria stick to the walls of the urethra tube and begin to multiply, causing an infection, according to WebMD. Once the UTI is underway, you can experience all sorts of horrible symptoms, including a burning feeling when peeing and an urge to urinate even when you don’t have to. Here’s what’s worse though: If the UTI goes untreated, it can spread into the kidneys causing serious back pain, nausea, and a brutal fever. If the kidney infection gets bad enough, you might even need to take a hospital visit. Basically, the whole experience — from start to finish — is just awful.

The bad news? According to Everyday Health, one in five women will develop a UTI over the course of their life, and those who have them once are likely to get one again. The positive news? UTIs are often preventable when the proper precautions are taken. Here are nine easy ways to help prevent a UTI, and all the pain and discomfort that usually comes with it:

1. Never Hold In Your Urine

When you feel the urge to pee, go right away. Sometimes you’re someplace where you can’t immediately get to a restroom, but you should certainly try, whenever possible. Holding it in isn’t a direct cause to a UTI, it can potentially lead to damage in the bladder lining, leaving the bladder more susceptible to infection from bacteria, according to Dr. Chamandeep Bali, a naturopathic doctor at the Toronto Naturopathic Health Clinic in an article for the Huffington Post.

You may have considered this method a rumor, but it’s very accurate. Whenever you’re having sex, you’re putting yourself in contact with bacteria, and that bacteria is being built up inside of you during the act, according to Everyday Health. But, this is not to say, of course, that you shouldn’t be having sex. That's still totally fine. Right after you and your partner finish getting busy, go to the bathroom and pee to help flush out the system. Be sure to clean your genital area well, and you’ll be thankful you did later.

There are so many important reasons to change your tampon regularly, and while you might have not considered its possible role in causing a UTI — you should. Tampons should only be left in for short amounts of time (e.g., never more than 4-8 hours), according to Tampax, as it can be a breeding ground for bacteria. If you’re comfortable with using a pad instead, it’s said this may also help in UTI prevention, according to Everyday Health.

According to Eating Well, a 2003 study at the San Francisco Veterans Affairs Medical Center found that Vitamin C is known to help prevent the growth of bacteria in your bladder by acidifying the urine. Try to take about 1,000 milligrams each day. Additionally, probiotics — including acidophilus and bifidobacteria — are helpful in supporting a healthy immune system, and should be taken daily in the form of a supplement, according to Harvard Medical School's website.

5. Incorporate Cranberries Into Your Diet

If you’ve ever thought you had a UTI, you likely ran to the store to buy cranberry juice. However, the reviews are mixed when it comes to whether or not cranberries can cure UTIs, according to Cochrane Medical research. However, cranberries are helpful in preventing UTIs. If possible, cranberry should be incorporated into your diet regularly as a precautionary means to bacteria growth in the bladder lining. The statistics back up its usefulness; according to a study out of Finland, women who drank cranberry juice daily for 12 months experienced a 20-percent reduction in UTIs.

Regular urination is an important part of preventing UTIs, so drink plenty of water to keep yourself continuously peeing. By remaining hydrated, you’re helping yourself to flush out that unwanted bacteria from the urinary tract, according to the National Institute of Diabetes and Kidney Diseases.

7. Wipe From Front To Back

Wiping from front to back alone might be your saving grace in preventing a UTI. This method of wiping reducing the chance of fecal bacteria from reaching the area near the urethral opening to a minimum, it is important to practice proper wiping techniques (i.e. front to back wiping) to help prevent rectal bacteria from entering the urethra-genital area, according to John L Brusch, MD, FACP in an article for MedScape.

Plain yogurt contains probiotics — or “good bacteria” — that help to counter “bad bacteria” that lives in your body. The less sugar the yogurt has, the better, as sometimes the added sugar can feed the “bad bacteria.” Try to consume a cup of yogurt per day, and the best kind to eat would be plain, which has live, active cultures. Another benefit of eating yogurt? It could also help prevent the onset of a yeast infection when consumed regularly, according to WebMD.

9. Reconsider Your Form Of Birth Control

According to the National Institute of Diabetes and Kidney Diseases, bacteria growth has been attributed to certain birth control methods such as diaphragms and unlubricated or spermicide-treated condoms. Try switching to lubricated condoms without spermicide.

While UTIs are accompanied by some terrible symptoms, we can help prevent ourselves from getting them by following those simple precautionary steps. With something as dreadful (and common!) as a UTI, it's better to be safe than sorry, and remember to always contact your doctor if you are showing symptoms of a UTI or any other medical issue.

More like this
The 4 Best Lip Balms To Prevent Cold Sores, According To A Dermatologist
By Maria Cassano
The 8 Best Crystals For Meditation, According To A Healing Energy Practitioner & Meditation Teacher
By Lauren Moison
The Internet Is Obsessed With These LEGO Flowers — Here’s Where To Buy Them
By Alexis Morillo
24 Funny Valentine’s Day Captions To Use No Matter Your Relationship Status
By Jessica Booth
Get Even More From Bustle — Sign Up For The Newsletter
From hair trends to relationship advice, our daily newsletter has everything you need to sound like a person who’s on TikTok, even if you aren’t.