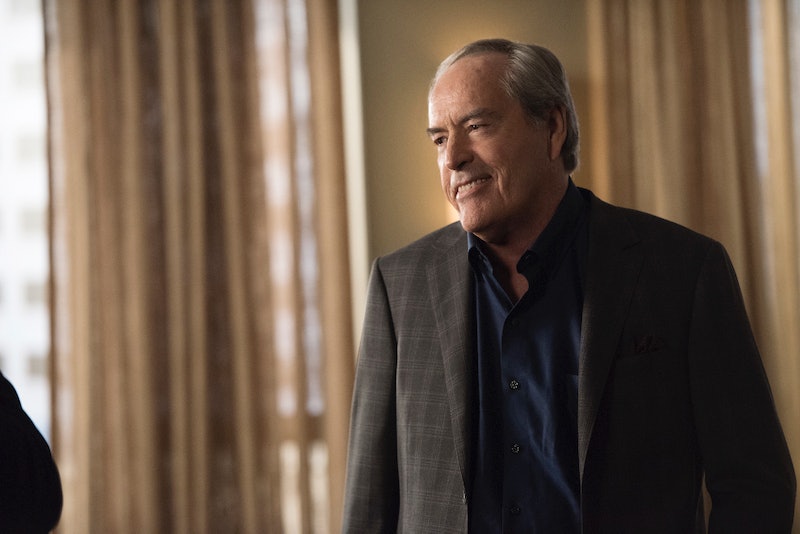 After last week's emotional departure that explained what happened to Jemma Simmons, the S.H.I.E.L.D. agents will be back on the hunt for Grant Ward and his new branch of Hydra. One of the new members on their ranks, as a matter of fact, has already been established in the Marvel Cinematic Universe. Who is Gideon Malick on Agents Of S.H.I.E.L.D. ?

While the name is new, this character has been seen before. The actor, Powers Boothe, appeared in the first Avengers movie as an anonymous member of the World Security Council. You know, those holographic faces that yell at Nick Fury? He didn't have a name back then, but I think the double casting is intentional. The Marvel Cinematic Universe has utilized their talent pool to fill multiple parts before, like Enver Gjokaj's duel roles as a featured cop in The Avengers and as Daniel Sousa in Agent Carter, or the fact that actress Laura Haddock is in both Guardians of the Galaxy and the first Captain America. However, I don't think this is a coincidence.

You'll notice that Powers Boothe was not in Captain America: Civil War, where the World Security Council was targeted by Alexander Pierce. That should be a clue as to where Malick's loyalties lie and why he is both alive and no longer on the Council at this point in the MCU.

Gideon Malick will debut on Tuesday's episode "Among Us Hide," and according to the official ABC press images, will share scenes with Spencer Treat Clark's character Werner Von Strucker. Either this guy has been Hydra all along (and to be honest, someone in that World Security Council had to be) or he is about to be recruited. In a preview clip for the episode, Malick calls up Ward and admits that he "does not know his name" and Ward refers to him as someone feared by Hydra, presumably. Perhaps these are two "heads" of Hydra that need to decide whether or not they are working together or apart.

When Marvel first announced the casting, executive producer Jeff Loeb described Gideon Malick as "incredibly menacing," "ominous and powerful," and "a character that even the stone-cold Grant Ward would fear." Yikes! I've thought for a while that Ward made a poor decision when he teamed up with young Werner. That kid is definitely the type to overthrow his bosses, and someone as powerful as Gideon Malick seems to be could make Ward's downfall come even sooner than we think. That isn't to suggest that Ward won't still be useful to Hydra. Do you think he knows that Nick Fury is alive? If so, Malick's history with the former S.H.I.E.L.D. director could make them a good team.

Still, I'm thinking that, if Gideon Malick has anything to say about it, Ward's days of doing donuts in parking lots to intimidate minions on Agents of S.H.I.E.L.D. are coming to a middle.