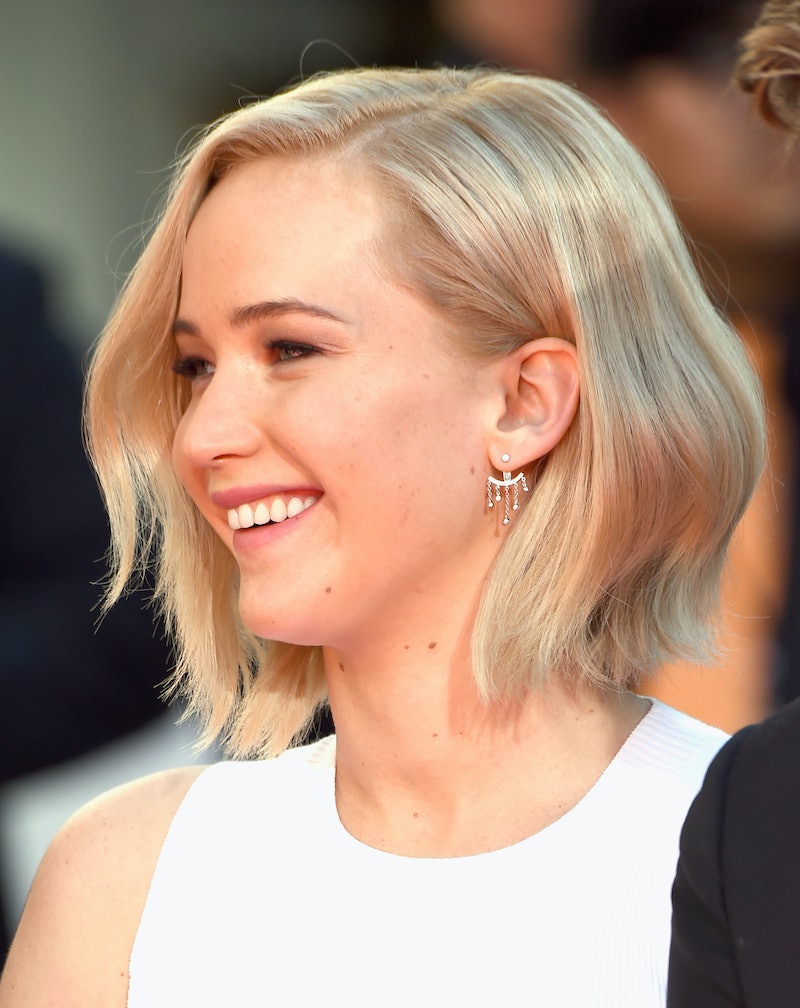 Let it never be said that fiction does not inform reality. Of course, I don't have to tell that to any avid book reader, which is why it probably comes as no surprise that Jennifer Lawrence is inspired by Katniss Everdeen. According to Reuters, when asked if Katniss inspired her essay on the gender wage gap in Lena Dunham's Lenny Letter, Lawrence responded, "I don't see how I couldn't be inspired by this character. I mean, I was so inspired by her when I read the books, it's the reason I wanted to play her... I think it would be impossible to go four years with this character and not be inspired by her." While that's not a definitive answer that one directly led to the other, it was still an amazing thing for the actress to note. Katniss might be a fictional character, but she's also a role model and inspiration — not only to everyone but also to the actress that plays her.

In truth, there were several factors that led to Lawrence's wage-gap criticism, many of which she outlined in the essay itself. However, it's easy to see the places where Katniss may have been an influence. "A few weeks ago at work, I spoke my mind and gave my opinion in a clear and no-bullsh*t way; no aggression, just blunt," Lawrence wrote in the essay. "The man I was working with (actually, he was working for me) said, 'Whoa! We’re all on the same team here!' As if I was yelling at him. I was so shocked because nothing that I said was personal, offensive, or, to be honest, wrong. All I hear and see all day are men speaking their opinions, and I give mine in the same exact manner, and you would have thought I had said something offensive."

Katniss is not good at social games. Katniss is not good at being "adorable." Where Peeta can charm and lie and manipulate with the best of them, Katniss is blunt and aloof, frequently awkward and undeniably cold, in her interactions with people until she gets comfortable with them. Just as Lawrence said that she was tired of trying to find the "adorable" way to state her opinion and still be liked, so too does Katniss flourish as a woman of action rather than a woman of words. Katniss is at her best when she's fighting against injustice and sticking up for the underdog, not trying to find the kindest and most convincing way to state her opinions. Katniss' enemy is as obvious and vicious as the Capitol, but Lawrence's enemy is even more pervasive and insidious: sexism. And, for both women, they eventually came to realize that pretty speeches can only take you so far, and that action is the only way to inspire change.

So, while Lawrence's wage-gap criticism was inspired mostly by, you know, the actual wage-gap as well, as a distinct frustration with how her thoughts and feelings are considered lesser, or must be carefully phrased, for them to even be taken remotely as seriously as those of her male co-stars, it's clear when you read the full essay that a little of Katniss Everdeen bled through the screen into the actress that plays her. "I wanted her to be a warrior right away — I wanted her to want to be a leader," Lawrence went on to say at the ceremony. However, what she neglected to mention is that Katniss isn't the only one who is a warrior and a leader. In fact, Lawrence has proven more and more, each day, that she is every bit of a fighter as her character.