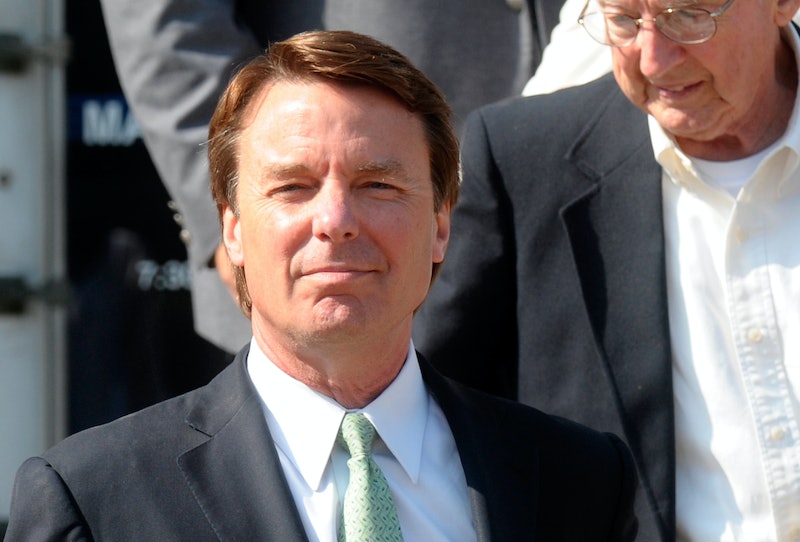 There are so many names and faces in American politics, and sometimes one will explode into relevance one day, and blow up in scandal the next, careers made and destroyed in relatively short order. And that's a description that fits a certain former senator from North Carolina pretty well — whatever happened to John Edwards?

For those of you who don't keep up with politics that closely, or those of you who've forgotten about the high-profile, tawdry scandal that scuttled Edwards' once-promising political future, here's some background: Edwards, now 62, was the Democratic Party's candidate for vice president back in 2004, running with Massachusetts Senator John Kerry against incumbent president George W. Bush and vice president Dick Cheney.

The Democrats lost that race, obviously, but Edwards was back in 2008, this time running for president in his own right. But it was during that presidential campaign that all of the drama, scandal and controversy would start: Edwards had an extra-marital affair with a woman named Rielle Hunter, eventually fathering a daughter named Quinn with her, while his wife, Elizabeth, was stricken with terminal breast cancer. She ultimately separated Edwards before she died, though not immediately — she stood by him after he admitted the affair, but when he confessed to fathering the child, she started divorce proceedings.

That wasn't the end of Edwards' troubles, however. With his political career already in shambles, and considered a pop-cultural punchline and a cruel pariah for cheating on his gravely ill wife, Edwards then faced down criminal allegations that he misused campaign funds to try to cover up the affair with Hunter. He was indicted by a North Carolina grand jury, and faced six felony charges in 2012, as CNN detailed: conspiracy, four counts of illegal campaign contributions, and giving false statements.

His defense team was successful in the end, however — they successfully argued that Edwards' actions might have been immoral, but not criminal. As the Los Angeles Times detailed at the time, attorney Allison Van Laningham defended Edwards in court as having "committed sins but no crimes," arguing that it was "humiliation he was trying to avoid all along." He was ultimately cleared on one count, received a mistrial on the other five, and was home free when federal prosecutors dropped the case weeks later.

So, what is Edwards up to these days? According to The Washington Post's Michael Leahy back in 2012, months prior to Edwards' acquittal, his life was pretty normal, if plagued by a lot of stress — amid spending time with his children, and residing at the estate that he'd left behind when Elizabeth filed for divorce in 2010, he also suffered a heart scare that momentarily delayed his legal proceedings.

Nowadays, however, he's back at the job that once earned him millions, and helped set the stage for his leap into elected politics. According to USA Today back in April 2014, Edwards is practicing law again, having opened up a law firm called Edwards Kirby, named after himself and his partner, David Kirby. His daughter Cate is also an attorney with the firm. They specialize in personal injury cases, which was always part of the right-wing knock on Edwards as a politician — fairly or not, personal injury lawyers are often labelled as "ambulance-chasers."

Basically, if you're a sucker for a good political redemption story, you'll likely be disappointed in this instance. Simply put, there's been absolutely no public indication Edwards will ever mount another run for office, and it's not hard to see why. Simply put, the combination of factors that led up to his fall from grace — a relatively usual political sex affair, amplified by the sleazy betrayal of his dying wife, and the tabloid headlines it generated — has basically closed the book on John Edwards, politician.