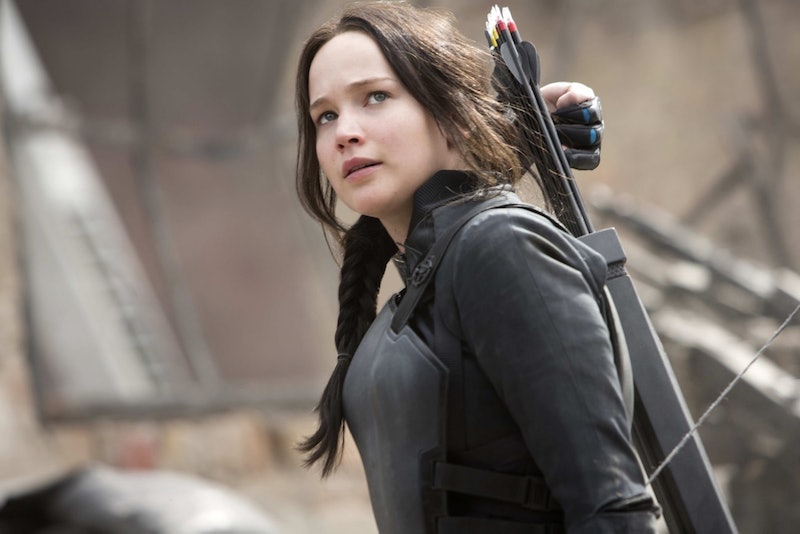 There's no doubt that The Hunger Games is one of the great movie franchises of our time. And now, with the second half of Mockingjay coming up, it arguably belongs in the proverbial Last Movie Two-Parter Hall of Fame, which Harry Potter and Twilight would both occupy, if such a thing existed. With the final installment of the franchise, The Hunger Games: Mockingjay, Part 2, hitting theaters Nov. 20, I can't help but feel pretty bummed coming to the realization that, well, this is it. And while the realization is saddening, there is one thing that gives me comfort whenever I go to bed at night as a Hunger Games fan: that I'm not in this alone, and that all Hunger Games fans understand the things I'm going through now.

As many other devoted readers and viewers know, The Hunger Games has a massive, rabid fandom that I know I can reach out to for quality fan fiction, memes, and discussions to be had long after I see Jennifer Lawrence as the amazingly badass Katniss Everdeen on screen for the very last time. In honor of the series' upcoming finale, here are 11 things that only Hunger Games fans know to be true. Seriously, this series understands our day-to-day lives more deeply than we've ever realized.

Peeta's got 99 problems — most of them involve Katniss, breading, and fighting to survive. Not so much the whole staying-a-kid-forever. Which makes you wonder who's really better off: Peeta or Peter?

2. The Very Real Feeling Of Getting Played By The Bae

3. That There's Nothing Like A Post-Apocalyptic Future To Boost Your Fitness Inspo

4. The Importance Of Interior Design And Preservation Of Precious Woods

Super important upcoming Thanksgiving tip: never stab the mahogany table, no matter how pissed off you are that your cousin nabbed the last piece of pie. Just don't. On a different note, can't you totally see Pocahontas and Effie Trinket totally bonding over the colors of the wind, trees, and fabrics?

5. The One Factor That Makes Or Breaks Hook-Ups

6. That A Love Triangle Doesn't Make The Hunger Games Another Twilight

Love triangle aside, Katniss is no Bella. But would you rather be Katniss or Bella? Would you rather have to pick between Peeta and Gale or Edward and Jacob? I promise for this one, there's absolutely no wrong answer. I'm personally #TeamKatniss!

7. That Katniss Is A Queen, Therefore It Only Makes Sense That Her Favorite Song Would Be By A Queen

If Alicia Keys doesn't make a special appearance in The Hunger Games: Mockingjay, Part 2 just to sing about how much Katniss is one fire (both literally and metaphorically), then I'm going to be severely disappointed. But in a perfect world, it would so happen.

8. That Lady Gaga Has Always Been Ahead Of The Curve

What will the next level crop top look like? Will Uggs still exist? The Hunger Games looked into its crystal ball and has foreseen the future of fashion, ya'll. Kudos to Gaga for keeping up. Now someone get Anna Wintour on the line.

9. That We've Basically Been Playing The Hunger Games In School All Of These Years

When in doubt, picking "B" is still your best shot.

10. That We're Not Even Going To Pretend We Want To Go To Panem

Even if a vortex leading to Panem opened up in front of me right this moment, I still wouldn't budge. ¯\_(ツ)_/¯

11. That Everything Else In Life Seems Achievable When You Think About All The Crap Katniss And Peeta Have Gone Through

I solemnly swear to give up the snooze button and never allow another Monday morning to defeat me again. May the odds be in my favor.