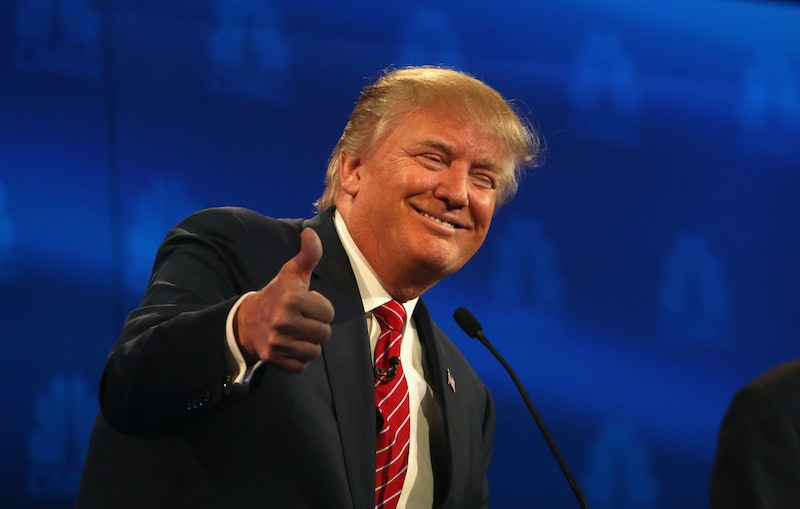 Though Donald Trump hosting Saturday Night Live on Nov. 7 is sure to be riveting television, not everyone is happy about NBC's decision to work with the real estate magnate and former The Celebrity Apprentice host again. As you might recall, NBC announced that it fired Trump from his reality show and the network would stop airing the Miss Universe and Miss USA pageants in June because of his offensive comments about Mexican immigrants. People were shocked when NBC announced that Trump would host SNL just a few months later, which spurred many "stop Trump from hosting SNL" petitions from Americans angered by his racist remarks.

The National Hispanic Leadership Agenda, composed of 40 organizations, sent a letter to NBC last month that read: "Donald Trump has yet to apologize for his bigoted comments about Mexican immigrants. Allowing Trump to host SNL will legitimate and validate his anti-Latino comments. ... We are appalled that you would enable Trump's hateful speech for nothing less than a ratings ploy and ask that you rescind the SNL invitation." Even Congress got involved in the protests, with the Congressional Hispanic Caucus releasing a statement earlier this month that said: Be it resolved that the Congressional Hispanic Caucus calls upon NBCUniversal, Broadway Video, and SNL Executive Producer Lorne Michaels to disinvite Mr. Trump from hosting Saturday Night Live because racism is not funny."

If you think NBC should cancel Trump's SNL appearance, here are four petitions you can still sign to encourage the network to do just that.

The Change.org petition is a follow-up to its first call for NBC to cut ties with Trump (which it did). The petition's description reads: "Dear NBC and now Lorne Michaels and Comcast, Thank you for dumping Trump because of the original version of this petition. It was my and 218,000 people’s understanding that you had listened to what we had asked." Add your name to help it reach its goal of 300,000 signatures.

This Forcechange.com petition urges SNL to disinvite Trump and calls out the show for its lack of Latino cast members. The website says: "Over the course of the 40 years Saturday Night Live has been on the air, only two known Latinos have been cast on the show. With statistics like that, you are implementing the idea that the Latino people are welcome to laugh at and be made into the joke, yet not to tell it themselves. I urge you to cancel the upcoming episode Trump is slated to host and prove once and for all that you put the respect of the Latino community over ratings."

A second Change.org petition has less signatures than the first, but calls for the same thing: Getting Trump off SNL. The petition says: "Donald Trump's racist, misogynist, and anti-immigrant rhetoric shouldn’t have a place in our mainstream society. Even his fellow Republicans have called him out on for his outrageous comments and actions."

You can sign one (or all) of the petitions if you don't want to see Trump host SNL.