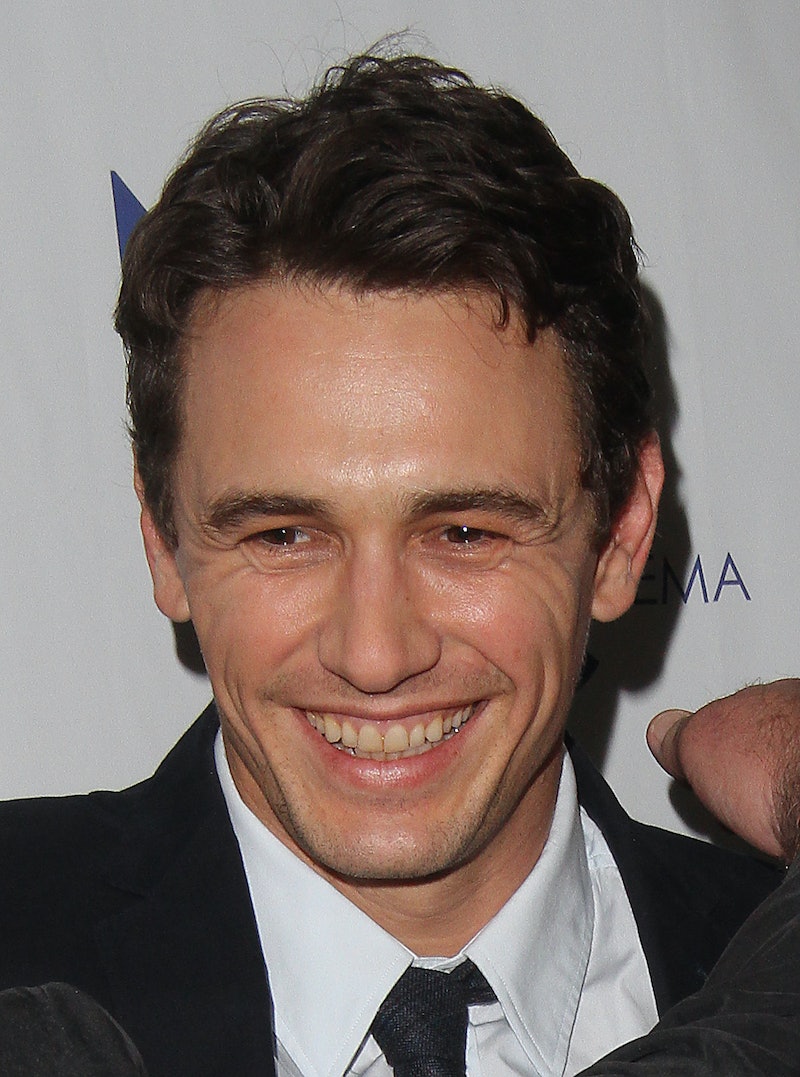 For the past two years I've been having a recurring nightmare in which James Franco knocks at my parents house, tells them he's an "old friend" of mine, and then settles into their house to have dinner with them. He never leaves and sets up a studio in my old bedroom and I spend the rest of the dream in a cold sweat trying to figure out ways to get rid of him (he outsmarts me every time). This is 100 percent true, by the way, and I bring it up because, honestly? What makes the dream so bizarrely scary is that it's totally plausible. There's nothing that James Franco could do these days that could surprise me, and that includes setting up shop in my old bedroom. For instance, James Franco taking on another project? Not surprising. And, also, true: Recently announced is yet another totally James Franco project in which the prolific polymath is making a concept-album and film with his band Daddy based on his own poems inspired by cult band The Smiths. Because, of course he is. The full length album (titled, naturally, "Let Me Get What I Want") will have music videos accompanying every song which, when put together as one, will take the form of the movie.

At this point, James Franco has become so relentlessly unsurprising with his non-stop production line of creativity (like, seriously, the guy is a painter, writer, poet, director, actor, video artist, professor, musician and lord knows what else) that he's basically become his own adjective.

That's right: Francoesque is the Kafkaesque of our generation. To be Francoesque is to produce a prolific, seemingly never ending collection of creative work which is often deeply self-referential, tongue-in-cheek and pretentious to the point where you can't tell if it's parody.

But what are the most Francoesque projects to date, I hear you ask? Well, let's take a look.

Flip Side: Real And Imaginary Conversations With Lana Del Rey

In this soon-to-be-released book (March 16th, 2016, folks!), Franco is hoping to deliver a blurred portrait of his friend and muse Del Rey via conversations that have actually happened with the musician and others which, presumably, he's fashioned out of off-cuts of Allen Ginsberg poems. In the original V Magazine article which inspired the book, Franco gives us an introduction so Francoesque it hurts:

This is a poem about Lana Del Rey.This is an essay about Lana Del Rey. Lana has become my friend. She is a musician who is a poet and a video artist. She grew up on the East Coast but she is an artist of the West Coast. When I watch her stuff, when I listen to her stuff, I am reminded of everything I love about Los Angeles. I am sucked into a long gallery of Los Angeles cult figurines, and cult people, up all night like vampires and bikers. The only difference between Lana and me is her haunting voice. That carries everything. The voice is the central axle around which the spokes of everything else extend. My axle, like her voice is for her, is my acting. Out of it, I do everything else.

Like vampires and bikers. Don't ever change, sweet boy.

This one is Francoesque for two reasons: The first is that they involve Franco BFF and regular collaborator Seth Rogen totally butt naked , and the second is that they're basically an adaptation of another artist's work (Christopher Schultz, from his project simply titled "Seth." You can take a look at his original drawings here, but be warned, it's super NSFW). But hey, no judgment. When you happen upon nude drawings of your best friend, then what else can you do apart from elaborate on them with scrappily applied acrylic paint with phrases like "Sleepy Bear" and "Seth At Rest" and spread those colorful, BFF tributes to the whole world?

And seriously, you can feel Franco's unadulterated glee in every single brush stroke. It's the bromance that will never die, people.

Making A Scene With James Franco

In this AOL Originals series, Franco and his team of film makers spin a wheel of "popular" movie scenes where they then mash up the two winning choices in an often horrifying yet hilarious convergence of the source materials. It also often ends up with Franco acting against himself such as in Wayne's Titanic (above) or When Harry Met Harry, with Franco shaking his head in great dismay at what movie scenes the general public actually think are good. Franco vs. Franco? It's so Franco.

In this short story (originally published by Vice Magazine), Franco tells a fictionalized version of his own life featuring a potty-mouthed, desperate encounter with a character named Lindsay Lohan in Bungalow 89 of the Chateau Marmont. It's Franco 101: In the story, he stares at a picture on the wall of "a boy dressed as a sailor with a red sailor cap" who he thinks looks like him, reads Salinger to a drunken starlet, name drops heavily and at one point zones out completely to focus on a billboard of a Gucci advert featuring himself.

If there's one thing that James Franco is great at, it's playing James Franco. And that isn't intended as a no d'uh quippy comment but merely that Franco thrives when he's allowed to play with his public persona like a cat with a ball of yarn. From his brilliant guest appearance on 30 Rock (in which he enters a fake relationship with Jenna Maroney in order to counteract rumous that he's actually in love with a body pillow), to his brief cameo in the Veronica Mars movie (in which he struggles to put a pair of skinny jeans on), Franco is great at subverting his own public identity for laughs. The real gem in his filmography, though, is clearly This Is The End, where his version of himself (pretentious, smug and self-absorbed) completely outshines the rest of the cast. (Well, maybe everyone but Rihanna.) He nails it.

Although Franco has had various exhibitions of his artwork by now, I just love this video of his 2013 "Gay Town" show at the Peres Projects Gallery in Berlin because it gives you such a full overview of how a Franco art show experience must feel.

Because you just know that this had to be more Franco than Rogen. It also remains a piece of captivating beauty; their love truly does know no bounds. Frogen forever, y'all.

So, what have we learned from this experience? Well, Franco often likes to play Franco in various projects and the Franco that he portrays is usually the same Franco who makes artwork about that Franco or writes about him too. Confused? Well, sometimes he just likes to reference songs by The Smiths. Suffice to say, it's all terribly Francoesque. And I might have nightmares about it, but I'm also completely enamored by it all too.