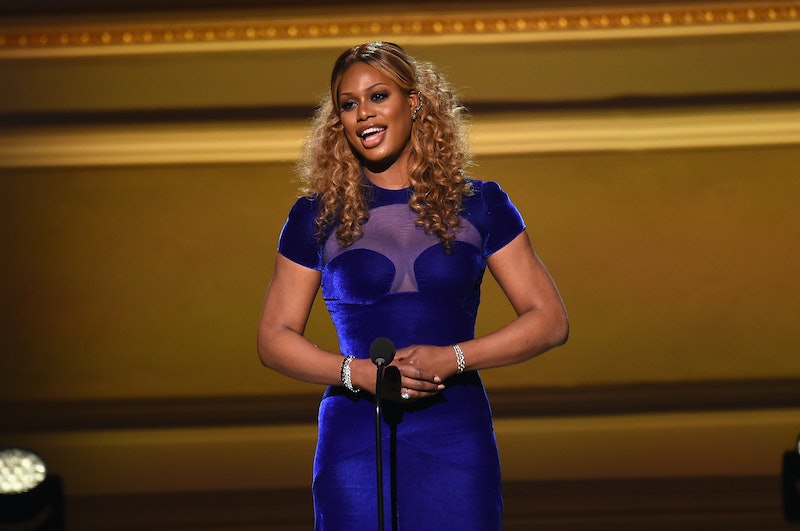 If you haven’t been paying attention, Katie Couric interviewed Laverne Cox and Carmen Carrera (two fantastic and lovely trans women of color), and she didn’t do a very good job. She did her best to derail and (as so often happens) return the conversation to these women’s genitals.

Fortunately, Laverne and Carmen were having none of that, and schooled Katie Couric in common courtesy. Laverne in particular was brilliant bringing the discussion back around to some of the systemic difficulties that trans women face, and the danger that trans women, especially trans women of color, face for daring to live as they are.

As a transgender woman that is public (very public) about her transgender status, I too have had to field the genitals question more times than I want to recall. I’ve only been out and transitioning for a little over a year and a half, and in that time I’ve been asked more about my genitals than I had in the 24 years that I lived pre-transition at all of the doctor’s visits and in all the physicals that I’ve ever had. It even happens in the most ridiculous scenarios in which my genital configuration could not matter less.

Here’s one example: because I changed my appearance so much after I started transition, my ID no longer resembled me, so I went to get a replacement photo. I haven’t legally changed my name or gender marker, so I was just getting a photo ID that looked like me so that I could get a beer without getting intense scrutiny and outing myself (I knew most people don’t check beyond the photograph and the date of birth). The woman at the front desk of the DMV was kind enough, and didn’t remark on my old ID. She directed me to the self service kiosk. Unfortunately, it was not functioning correctly and had to ask for assistance. A man in his mid-50s or so walked out, asked me what the problem was, and I informed him. He proceeded to loudly remark on my ID’s inconsistency with my appearance, loudly ask me what my birth name was and repeat it as he typed it in, and then ask if I had had “the surgery” because I was “the first one he’s ever met” right there in front of the crowded DMV. There was absolutely no reason for him to need that information. Furthermore, I live in East Tennessee, which is not the most progressive area on earth, so I had no idea what any one of those people could have potentially done or said to me after I was pulled aside, isolated, and made a spectacle, being outed for everyone’s entertainment.

This sort of thing happens all the time. And it’s not just our genital configuration. People ask how we use the bathroom, how we have sex, and all manner of embarrassing, invasive questions in the name of “curiosity”. This isn’t curiosity though, this is entitlement. Our society, which privileges cisgender bodies, has a systemic entitlement to bodies that deviate from the norm. It is seen as fair game to interrogate us, dissect us, and put us on display to gawk at our Other-ness, not as a means of truly understanding and accepting us, but as a way of justifying their own oppressive beliefs and separating us from the status of “normal” people. It reminds us that we are in a subordinate status, we have no consent to access to our bodies. We are not in control of our own bodies. It tells us that the wages for daring to transgress society’s prescribed norms are consumption and ridicule.

Most people that I interact with have no clue that I’m transgender, unless I tell them as much. Outside of my activism, it’s hardly relevant, and it’s not a detail that I see necessary to divulge in the great majority of my relationships unless I am very comfortable with a person and I find it relevant to the subject at hand. Yet, as soon as it’s known, people feel entitled to inquire about the status of my genitals, as if when admitting my trans status, my entire body became an acceptable topic of public discourse. It is as if when I open my mouth, my clothes are stripped and I am made to parade around until others feel an acceptable level of “understanding”. It’s demeaning, and no one would think it acceptable to demand that of a cis person, especially a cis man (although cis women do face a similar kind of public dissection – see the obsession with female celebrities’ bodies for an example) I don’t mind people knowing as much as I used to, but the option for discretion is important. As I’ve mentioned, I have no idea how anyone that I tell will react when I tell them. I have no idea if they will embrace me fully as I am, or if they will decide to no longer speak to me, or worse – and that “worse” is tragically an all-too-real reality for trans women.

In dating, the fear of disclosure is a real one. There’s a debate about whether a trans woman need to disclose at all, and I am firmly on the side of “it’s none of your damn business unless I decide to make it your business”, but seeing as I, like many women, can’t afford to pony up the $20,000 on average surgery (excluding travel and other incidental costs, which, even if I could afford insurance would likely not be covered) that our society has deemed a goalpost for being a legitimate person, disclosure for me remains an inevitable necessity should I engage with anyone sexually. It may seem a cursory inconvenience to cisgender people to have to talk about our genitals, but as I’ve mentioned, transgender people value their privacy because not only is it defying society’s demand that we bare ourselves to an oppressive regime, but it ensures our safety.

I’m grateful for Carmen and Laverne’s grace in turning their humiliation into their triumph and forcing this conversation into the mainstream, because for too long the genital conversation that we need (about how our genitals are no one’s business but our own and we are legitimate regardless of our genital configuration) is not the genital conversation that we’ve had. My hope, is that as word of this interview percolates through the mainstream media, people have an increased understanding of the issues facing trans people, including the violation of our privacy, and that as a result we have both increased sensitivity to transgender individuals that are interviewed and a more safe society for trans people.